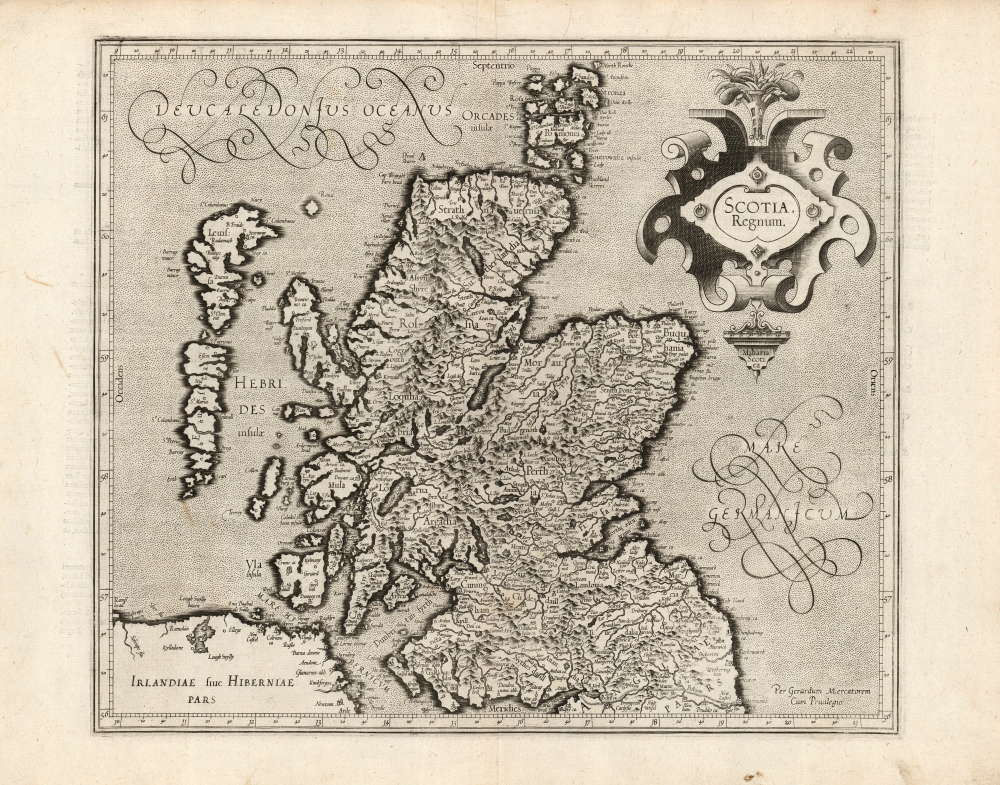 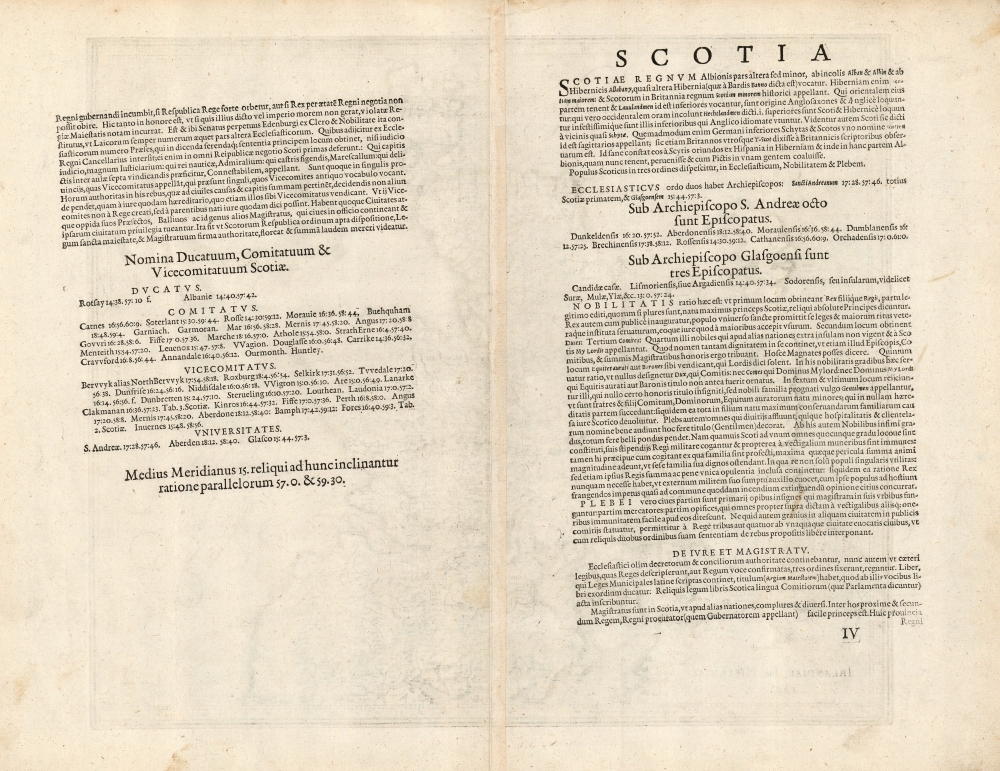 This is a superb 1595 first-edition of Gerard Mercator's map of Scotland. It is the second printed map specifically of Scotland to appear in an atlas, the first being the 1573 Ortelius Scotiae Tabula. This present map, however, replaced all earlier representations of Scotland. Rodney Shirley observed that 'this was to remain the standard outline, apart from minor improvements by Speed, until a new map of Scotland by Robert Gordon was published in 1654'.

Ortelius' Scotiae Tabula was based faithfully on the mapping of Scotland in Mercator's 1564 eight-sheet map of England, Scotland, and Ireland. Mercator's wall map was derived from a manuscript drawn by an unidentified English friend, and his data for Scotland appears to have suffered accordingly. The present work is much revised, with a great many material corrections suggesting a different if unknown source. A cursory glance at the Orkney Islands on Mercator's atlas map reveals differences between this and the 1564 map. Further scrutiny on the Upper Firth of Clyde ('Dumbritan Fyrth') and the vicinity of Loch Lomond, for example, will show more accurate and recognizable place names than appear on the earlier maps. Whomever produced the source for Mercator's revisions to the present map was more familiar with Scottish geography than the person informing his earlier work.

The southern limit of the map encloses the River Tyne and Hadrian's Wall, here termed Murus Pictius, the Pictish Wall. As such, part of the northeastern coast of Ireland is shown as well, but that island's detail is here restricted to the coastline with the result that the eye is not distracted from the detail of the primary focus of the map. The map is sufficiently broad to include both the Hebrides and the Orkney Islands.

Although his atlas was published posthumously by Mercator's heirs, this is among the maps engraved personally by the master. This is a superb example of his work. Scotland's rugged terrain is evocatively, if pictorially represented. Even the smallest lettering engraved here is clear, fine, and legible. Mercator's innovation in the application of Italic letters to differentiate town names from regional ones is evident throughout. Bold shading sets off the coastlines, both for the oceans and the inland bodies of water. The broad expanses of stippled ocean to the northwest and to the east afford Mercator the opportunity for some beautiful calligraphic flourishes. The map's title, and its appended scales in Scottish miles, are contained in an elegant strapwork cartouche also characteristic of Mercator's compositions.

This map was engraved by Gerard Mercator after 1585, but was not published until 1595 by his heirs in the posthumous Atlas sive Cosmographicae. It was included in editions of the Mercator / Hondius atlas without change until 1636, at which point Mercator's imprint was removed. Thereafter Jansson replaced the map in his editions of the atlas with a new plate. The typography of the verso text on our example conforms to the 1595 first edition of the Mercator atlas. The map is well represented in institutional collections in its later editions. Ten examples assigned a 1595 date are listed in OCLC.

Excellent. Few stains away from image, else fine with a bold strike and generous margins.