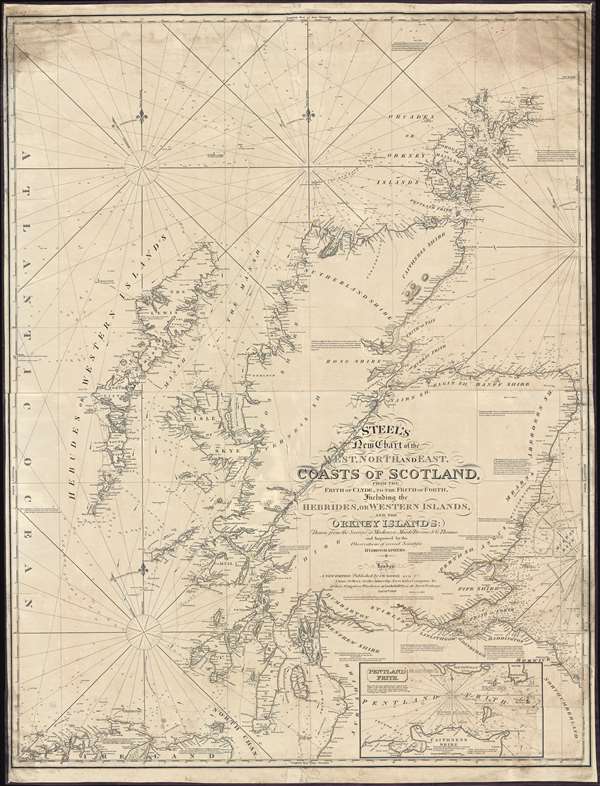 This is an 1844 David Steel and John William Norie nautical chart or maritime map of the coasts of Scotland. The chart depicts the region from the Atlantic Ocean to Fair Island, Aberdeenshire, and the Murray Bank and from the Orkney Island to Northumberland, Ayreshire, and Ireland. Highly detailed, myriad depth soundings are indicated throughout. Counties within Scotland are labeled, along with several Lochs (including Loch Ness). Numerous firths along the Scottish coast are also illustrated in detail. Cities, towns, villages, and other locations are labeled all along the coast, including Aberdeen, Montrose, Dundee, Perth, Stirling, and Glasgow. Castle Urquhart is also labeled along the coast of Loch Ness. An inset map of Pentland Firth is situated along the bottom border. Lighthouses are labeled throughout the map and indicated by red and yellow manuscript notations. Information concerning each of these lighthouses is present as well, providing details about each lighthouse's functionality.

This chart was produced by John William Norie in 1844, updating David Steel's plate. All examples are exceedingly rare.

David Steel, Senior (1734 - 1799) was a British chart publisher, engraver, instrument-seller, bookseller, bookbinder, and vendor of patent medicines. The son of a William Steel, a bookbinder, he apprenticed in the firm founded by Mount and Page. He married Ann Beauchamp in 1776. He began publishing nautical charts in 1782. His business was founded on the publication of his own technical nautical works and the list of the Royal Navy. The firm owned a navigation warehouse and opened a navigation school in 1799. Following his father’s death, David Steel, Junior (1763 - 1803) took over the family business until his untimely death at the age of 39. Steel, Junior, first began working at the Navy Office, before leaving that position to study law. He worked a a practicing barrister for several years, until the death of his father. David married Penelope Winde on May 1, 1786. They had five children together. An obituary for David Steel, Junior, in the Steel publication Navy List states that 'of his character it may be said, that his ideas were most enlarged, his mind capacious and richly cultivated; his principles generous and manly; his eloquence nervous and impressive.' After David Steel Junior's untimely death, his wife Penelope took over the family business, and marries William Mason in 1806, with whom she continued the business. She moved the firm to 70 Cornhill in 1809 from Union Row, Tower Hill. By 1810 the supply of new charts had ceased, and John Purdy, who had apprenticed with David Steel, Senior, left the firm to work with Laurie and Whittle, the Steel's competitors. By 1814, Penelope Steel had entered into a business partnership with Stanley Goddard, a younger man, who would become her third husband, and renamed the firm Steel and Goddard. By June 1819, Goddard and the firm were bankrupt, and J. W. Norie and Company acquired the 'case fixtures, stock in trade and copper plates' from the firm. Learn More...

Very good. Full professional restoration. Large tear through the center of the map that has been professionally repaired. Blank on verso.