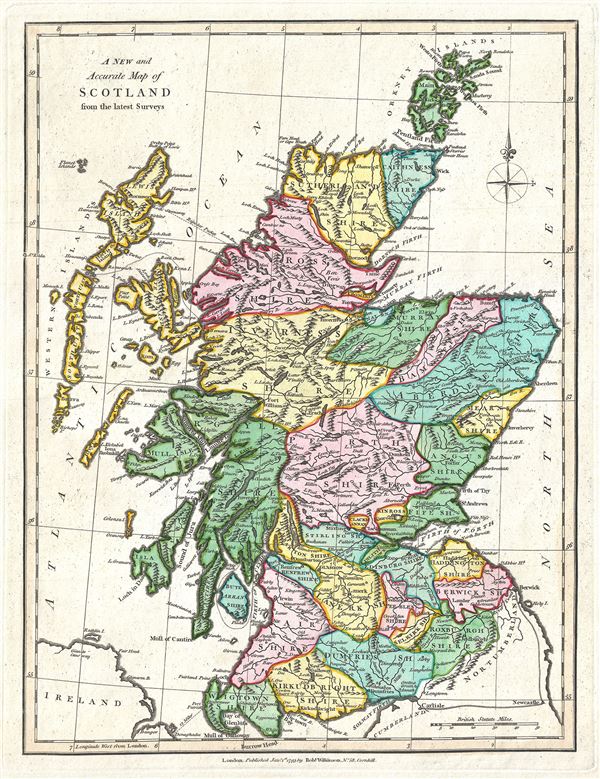 This is a finely detailed 1793 map of Scotland by Robert Wilkinson. Wilkinson's map covers Scotland in full from the Cheviot Hills to the Orkney Island and from the Outer Hebrides (Western Islands) to Aberdeenshire. Color coding divides the region into various counties with roads, lochs, cities, and rivers noted. Here all the counties are labeled as Shires, as the word 'county' did not become common usage in Scotland until the nineteenth century.

In the north are Caithness, Sutherland, Ross, Murray, Aberdeen, and Bamff Shires. With the exception of the merger of Ross Shire and Cromarty Shire, these counties are still in existence today. In central Scotland are the Inverness Shire, Mearns Shire, Angus Shire, Argyle Shire, Fife Shire and Perth Shire. Further south are the Shires of Stirling, Linlithgow, Renfew, Dumbarton, Edinburgh, Haddington, Berwick, Lanerk, Air, Kirkudbright, Dumfries, Selkirk, Wigtown and Roxburgh. South of Lewis Island is North and South Uist Island, and Coll Island, which retained baronial fief by the Macleans of Coll until 1848. In the northeast are the Shetland Islands, which did not officially become a part of Scotland until a Scottish Act of Parliament in 1669.