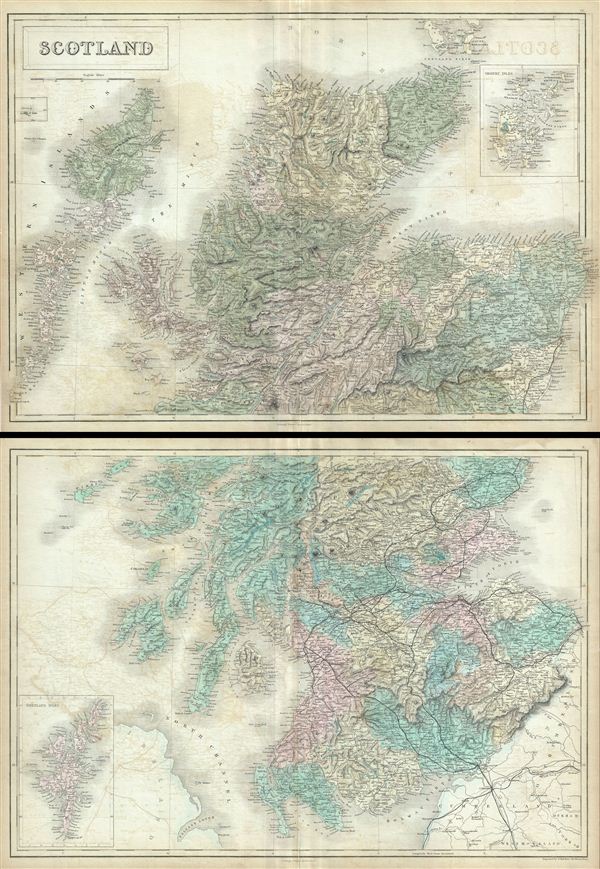 This is a fine example of Adam and Charles Black's map of Scotland. Divided into two separate maps, the upper map depicts northern Scotland from Blair Athol to the Island of Hoy (part of the Orkney Islands) in the north. An inset map on the upper right quadrant details the Orkney Islands and another inset near the left margin features St. Kilda. The lower map represents southern Scotland and covers from Coll Island to the Mull of Galloway. The lower left quadrant of this map features the Shetland Isles. This map was issued in the midst of Scotland's Industrial Revolution, in which it emerged as a regional center for engineering and shipbuilding. In 1843, against the backdrop of the Industrial Revolution, during which Scotland flourished, the Church of Scotland witnessed a division in which many of its ministers, following a decade long conflict, broke away to form the Free Church of Scotland. Various towns, cities, roads, rivers, mountains and several other topographical details are noted with relief rendered by hachure. Both maps were engraved by Sidney Hall and issued as plate nos. IX and X for the 1851 edition of Black's General Atlas of the World.

Good. Minor wear and verso repair on original centerfolds. Even overall toning. Some foxing and offsetting.