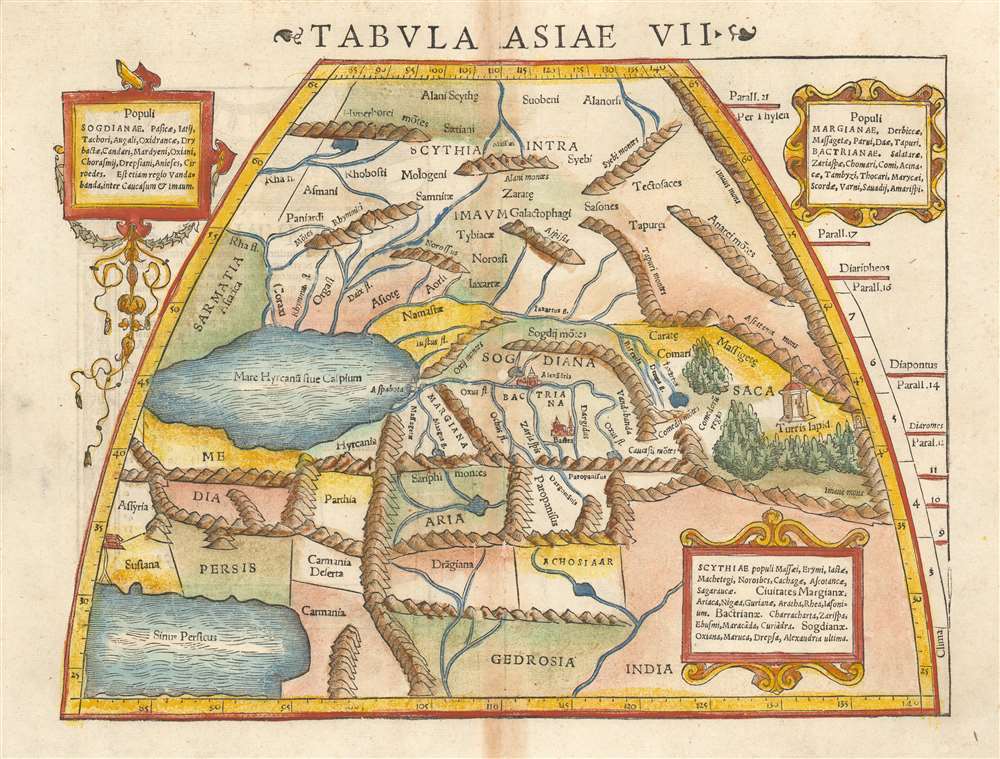 16th Century Woodcut Map of Kazakhstan, Tajikistan, and Uzbekistan as known to Ptolemy

This is a 1552 example of Ptolemy's map of the Silk Road. The seventh Asian map from Sebastian Munster's Ptolemy, it shows the lands in Central Asia, east of the Caspian Sea. These were occupied in the 1st and 2nd centuries CE by the Sogdiqna, an ancient Iranian civilization that at different times included territory located in present-day Kazakhstan, Tajikistan, and Uzbekistan. To the north are shown the lands of the nomadic Scythians.

Centrally, the lands of the Sogdiana sit astride what we know now to be the Silk Road. At the eastern extent of the map is shown Turris Lapid, the 'Stone Tower' (λίθινος πύργος in Greek) which marked the midpoint on the ancient Silk Road – the network of overland trade routes taken by caravans between Europe and Asia. The tower was the most important landmark on this route, where caravans stopped on their difficult and dangerous journeys to allow travellers to take on provisions, rest, and trade goods before continuing on.

This map appeared in Sebastian Munster's modernized Ptolemy, which was printed in six editions in 1540, 1541, 1542, 1545, 1551 and 1552. The typography of this example identifies it as belonging to the 1552 edition. Three examples of the separate map appear in OCLC in various editions; the entire book is held by a number of institutions. This is a map that appears on the market from time to time.

Munster, S./Ptolemy, C. Geographia Universalis (Basel, Petri) 1552     Following in the footsteps of Martin Waldseemuller and Lorent Fries before him, Sebastian Munster edited and published a modernized version of Claudius Ptolemy's Geographia. This appeared in six Latin editions in 1540, 1541, 1542, 1545, 1551 and 1552. According to Karrow, Munster based the text on the Latin translation of Willibald Pirkheimer, but he carefully collated it with previous editions, adding notes of his own. The first three editions contained 48 maps, consisting of 27 based on Ptolemy's ancient geography, and 21 maps based on modern geographical knowledge. The latter three editions contained 54 maps, comprised of the same ancient works but with six of the modern maps discarded, and twelve new ones added. For the collector, the modern maps are of sharpest interest. Some were based on Waldseemuller's geography, but many were based on Munster's own surveys and those of other European geographers whose assistance Munster had been able to enlist. Most of these would be reprised in Munster's magnum opus, Cosmographia Universalis. A disproportionate number of Munster's modern maps show contemporary geographical knowledge of the their respective areas for the very first time: The first map to show the continents of the Western Hemisphere; the first map to focus on the continent of Asia; the first modern map to name the Pacific Ocean. Even in cases where earlier maps exist, Munster's works very often remain the earliest such acquirable by the collector.