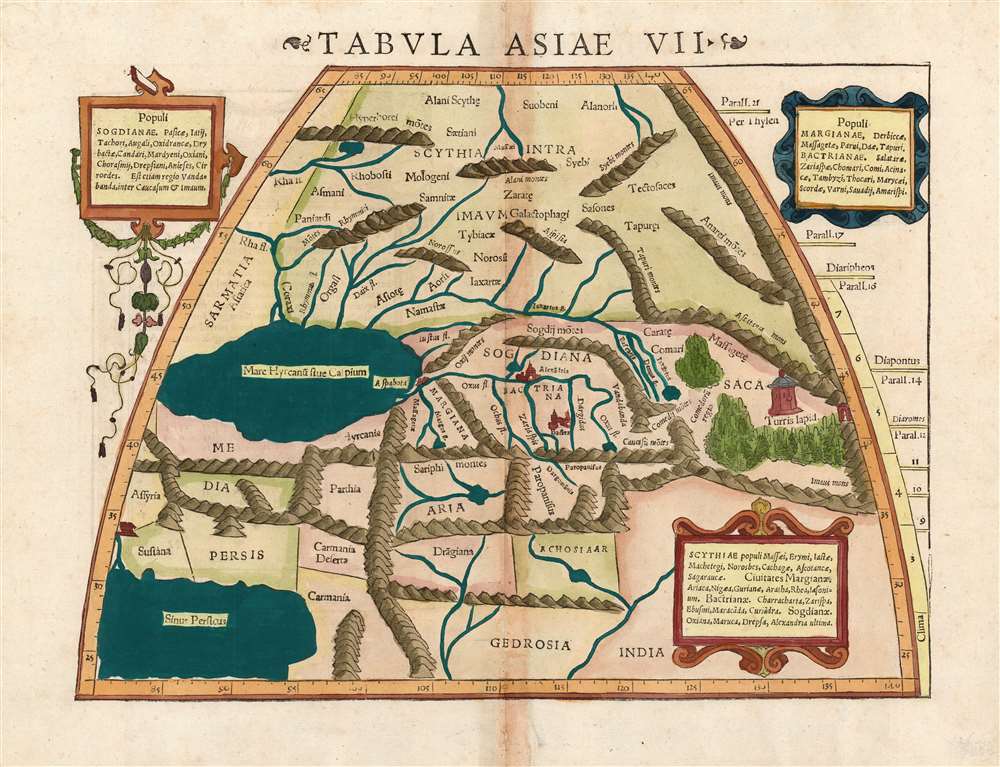 Mid-point of the Silk Route.

This is a 1552 example of Ptolemy's map of the Silk Road, the seventh Asian map from Sebastian Munster's Ptolemy. The map covers Central Asia east of the Caspian Sea. In the 1st and 2nd centuries CE, these territories were occupied by the Sogdiana, an ancient Iranian civilization that included parts of present-day Kazakhstan, Tajikistan, and Uzbekistan. To the north are the lands of the nomadic Scythians.

Centrally, the lands of the Sogdiana sit astride the historic Silk Route. At the eastern extent of the map is Turris Lapid, the 'Stone Tower' (λίθινος πύργος in Greek), a somewhat mysterious location traditionally considered midpoint on the ancient Silk Road. The Silk Road itself was a network of overland trade routes followed by caravans between Europe and Asia during the Pax Romana and subsequent Pax Mongolia (c. 1206 - 1368). The Stone Tower was the most important landmark on this route, where caravans stopped on their difficult and dangerous journeys to allow travelers to take on provisions, rest, and trade goods before continuing on. It is unclear if the 'Stone Tower' represented an actual city, or instead referenced the stone towers used by many Central Asian tribes to bury their dead.

This map appeared in Sebastian Munster's modernized Ptolemy, which was printed in six editions in 1540, 1541, 1542, 1545, 1551, and 1552. The typography of this example is consistent with known examples of the 1552 edition. Three examples of the separate map appear in OCLC in various editions; the entire book is held by a number of institutions. This map appears on the market from time to time.