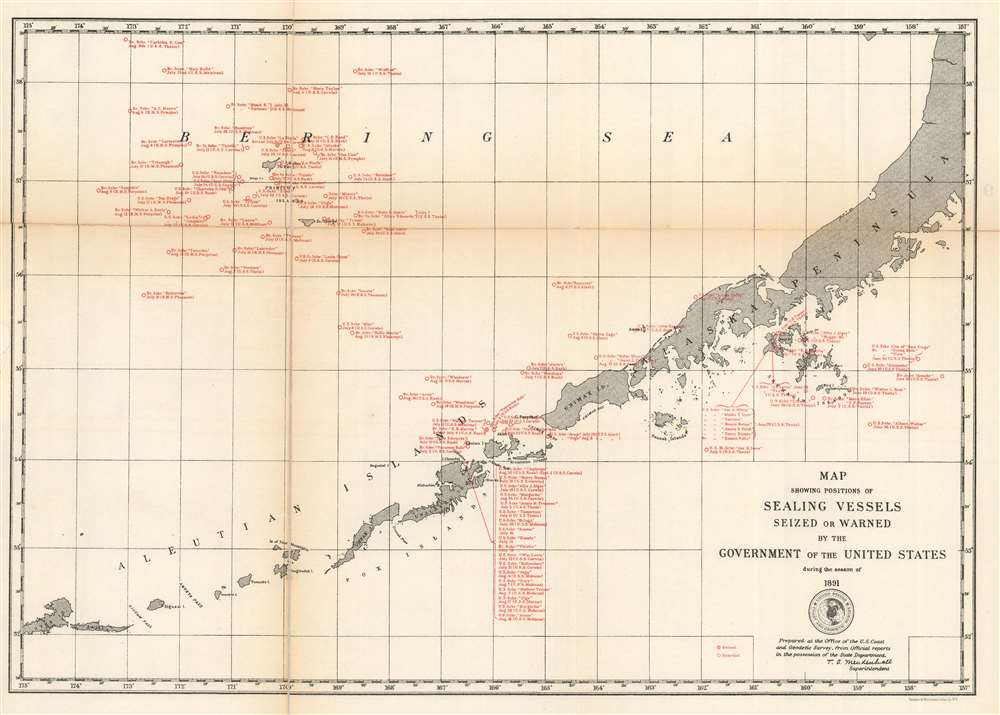 This is a rare c.1891 U.S. Coast and Geodetic Survey map of the Aleutian Islands highlighting sealing vessels warned or seized by the U.S. government during the 1891 season. Depicting from Atka Island to the Alaska Peninsula, the map identifies nearly 100 vessels boarded or seized by the United States. These vessels hailed from the United States and Britain and were stopped sometime between June and August 1891. Each citation references the name of the ship in question, whether it was boarded or seized and on what date, and whether a British or American ship stopped the offender.

The Bering Sea Arbitration of 1893

This map was produced as part of the Bering Sea Arbitration of 1893. The international incident was ignited by the seizure of three Canadian sealing vessels by the United States Revenue Cutter Service, known as the United States Coast Guard today. The British government, then in charge of Canada's foreign policy, immediately took offense and demanded the release of the vessels. In response, the U.S. claimed exclusive jurisdiction over the sealing industry in the Bering Sea. In the end, the British were compensated for the damaged ships, and the U.S. was denied exclusive jurisdiction. The final agreement limited pelagic sealing (hunting, killing, or capturing fur seals in the ocean instead of at their breeding grounds on land) in time, place, and manner. It created a sixty-mile zone around the Pribilof Islands where the seals were to be left alone any time of year, and prohibited pelagic seal hunting anywhere in the Bering Sea from May 1 to July 31 each year. It also required that all vessels be licensed and banned the use of firearms and explosives. In the end, scientists from both Britain and the United States studied the problem and concluded that seal hunting needed to be curtailed.

This map was created by the U.S. Coast and Geodetic Survey and published c. 1891. The OCLC catalogs examples as being part of the collections at the Ralph J. Bunche Library at the U.S. Department of State and the William Clements Library at the University of Michigan.


Thomas Corwin Mendenhall (October 4, 1841 - March 23, 1924) was an American physicist and meteorologist who was self-taught. Born in Hanoverton, Ohio, Mendenhall's parents were ardent abolitionists who regularly sheltered runaway slaves fleeing north along the Underground Railroad at their home outside Akron, Ohio. In 1858 Mendenhall became the principal of the local primary school and soon received an Instructor Normalis degree from National Normal University. He taught at several schools around Ohio and earned a reputation as an impressive teacher and educator. He was appointed professor of physics and mechanics at the Ohio Agricultural and Mechanical College (which became The Ohio State University) in 1873, making Mendenhall the first member of the original faculty at Ohio State. In 1878, he received the first honorary Ph.D. from Ohio State. He was recruited help modernize Meiji Era Japan in 1878 as one of the hired foreigners. He held a position as a visiting professor at Tokyo Imperial University until 1881, when he returned to Ohio. During his time in Japan, he founded a meterological observatory, deduced a value for the mass of the Earth, measured the wavelengths of the solar spectrum, and was one of the founders of the Seismological Society of Japan. In 1884, he became a professor at the U.S. Signal Corps and helped establish stations to systematically observe earthquakes in the U.S. He served as President of the Rose Polytechnic Institute in Terre Haute, Indiana, from 1886 until 1889, when he became the Superintendent of the U.S. Coast and Geodetic Survey. During his tenture as superintendent, Mendenhall issued the Mendenhall Order, which changed the fundamental standards of length and mass used by the U.S. Coast and Geodetic Survey from standards based in England to metric standards. During his tenure as superintendent he oversaw the establishment of the national boundary between Alaska and Canada. He also invented the Mendenhall Gravimeter in 1890, which was used by Albert A. Michelson to measure the speed of light. He then served as President of the Worcester Polytechnic Institute from 1894 until 1901, when he emigrated to Europe, returning to the U.S. eleven years later. He served as a member of the Board of Trustees of The Ohio State University from 1919 until his death in 1924. Mendenhall married Susan Allan Marple in 1870 with whom he had one child. Learn More...