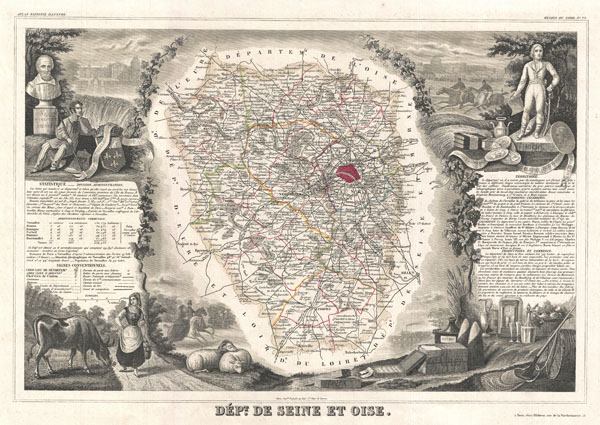 This is a fascinating 1852 map of the French department of Seine-et-Oise. Centered on Versailles, its administrative center, Seine-et-Oise extends from Espernon to Melun and from Pontoise to Etampes. Paris figures prominently in the right hand section of the map. Also shows the city walls surrounding Paris as well as the ring of fortifications completed in 1848. The embastillement of Paris was perhaps the most extravagant waste of resources of the July Monarchy. The whole is surrounded by elaborate decorative engravings designed to illustrate the agricultural and cultural wealth of the region. There is a short textual history of Seine-et-Oise on both the left and right sides of the map. Published by V. Levasseur in the 1852 edition of his Atlas National de la France Illustree.