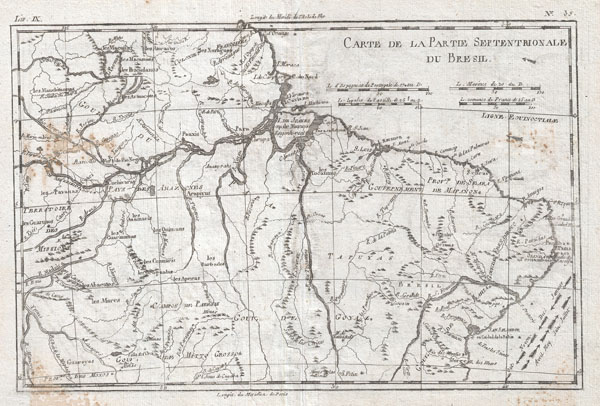 A fine example of Rigobert Bonne and Guilleme Raynal's 1780 map of Northern Brazil. This detailed map features the northern portion of Brazil from Bahia to Guyana. This also includes a portion of the Amazon River and its adjancet rainforest, the largest and most species-rich tract of forest in the world. Of note is the legendary Lake Parime in the northwest. It was on the shores of this lake that many explorers believed they could find the city of Manoa, or El Dorado. Explorers such as Sir Walter Raleigh searched this area in a vain attempt locate the lake and legendary City of Gold. The map also includes the eastern Amazon interior rivers, Mission Territories, Goyza and the coastal regions, with coastal currents noted. Atlas de Toutes les Parties Connues du Globe Terrestre, Dressé pour l'Histoire Philosophique et Politique des Établissemens et du Commerce des Européens dans les Deux Indes.

Good. Mnor discoloration left center near the Rio Negro and in the lower left corner. Original centerfold. Platemark visible. Blank on verso.
Looking for a high-resolution scan of this?