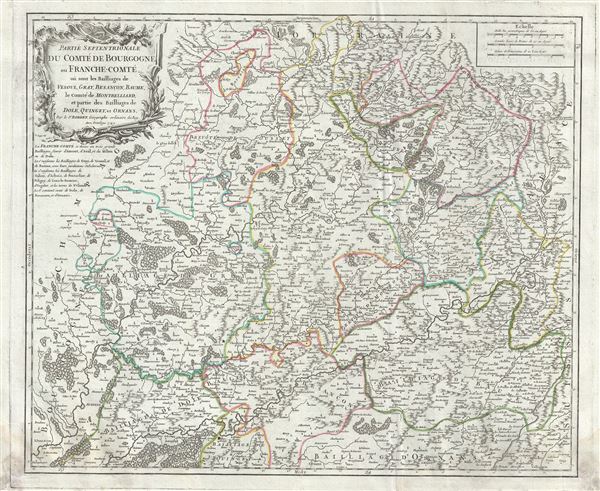 This is a beautiful 1749 map of the important Burgundy (Bourgogne) and northern Franche-Comte region of eastern France by Robert de Vaugondy. It covers the northern Franche-Comte region including the whole or part of the modern day departments of Doubs, Haute-Saone, Juba and the Territoire of Belfort. The map extends from Dole north to Bourbonne-les-Bains and east as far as Belfort. It rendered the entire region in extraordinary detail showing roads, canals, rivers, cities, villages, chateaux, etc.

Part of France's important Burgundy or Bourgogne Wine Region, the region of Haute-Saone is home to the Jean Roussey cheese factory. The Jura wines are very distinctive and unusual, such as Vin Jaune, which is made by a similar process to sherry, developing under a flor of yeast. This is made from the local Savagnin grape variety. Other grapes include Poulsard, Trousseau, and Chardonnay.

A beautifully engraved title cartouche adorns the top left quadrant of the map. Drawn by Robert de Vaugondy in 1749 and published in the 1757 issue of his Atlas Universal. The Atlas Universal was one of the first atlases based upon actual surveys. Therefore, this map is highly accurate (for the period) and has most contemporary town names correct, though historic names are, in many cases, incorrect or omitted.

Rumsey 3353.040. Pedley, Mary Sponberg Belle et Utile: The Work of the Robert de Vaugondy Family of Mapmakers, 146, State 2.
Looking for a high-resolution scan of this?