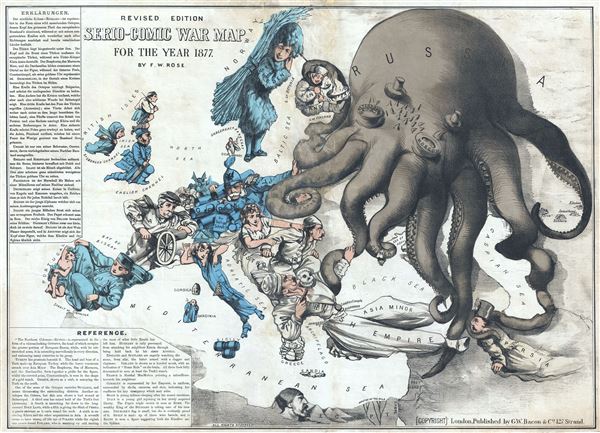 Commonly known as the 'Octopus Map,' this is a remarkable 1877 caricature map of Europe by Frederic Rose. The map presupposes that the reader will recognize the familiar shape of Europe and its constituent nations, which have here been replaced by caricatures, each of which tell their own political story. In this, his most famous map, Rose is responding to the Balkan Crises of 1877, wherein British interests were perceived to be under threat from the expansionistic zeal of the Russian Tsar.

In Rose's own words:

The Northern Colossus - Russia- is represented in the form of a vicious-looking Octopus, the head of which occupies the greater portion of European Russia, while, with its outstretched arms, it is extending marvelously in every direction, and embracing many countries in its grasp.

Turkey lies prostrate beneath it. The head and bust of a Turk make up European Turkey, while the lower vestments stretch over Asia Minor. The Bosporus, Sea of Marmora, and the Dardanelles, form together a girdle for the figure, whilst the coveted prize, Constantinople, is seen in the shape of a gold watch. Greece, shown as a crab, is annoying the Turk on the South.

One of the Arms of the Octopus encircles Bulgaria, and seems threatening the surrounding districts. Another envelopes Crimea, but this arm shows a bad wound at Sebastopol. A third arm has seized hold of the Turk's foot (Armenia). A fourth is stretching far down to the long-coveted Holy Land, while a fifth is giving the Shah of Persia a gentle embrace as it curls round his neck. A sixth is encircling Khiva and the other acquisitions in Asia. A sevenths seems to have wrong all life out of Poland while the eighth arm passes round Finland, which is warming up and making the most of what little Russia has left him. Hungary is only prevented form attacking his neighbor Russia through being held back by his sister Austria.

England and Scotland are eagerly watching the scene, from afar, the latter armed with a dagger and claymore. Ireland is shown as a hooded monk, with an indication of home Rule on the brain. All three look fully determined to save at least the Turk's watch.

France is Marshal MacMahon pointing a mitrailleuse towards his neighbor.

Germany is represented by her Emperor, in uniform, surrounded by shells, cannons, and shot, indicating her readiness for any emergency which may arise.

Spain is young Alfonso sleeping after his recent exertions.

Italy I as young girl rejoicing in her newly acquired liberty. The Pope's triple crown is seen at Rome. The wealthy King of the Belgians is taking care of his treasure. Denmark's flag is small, but she is evidently proud of it. Sicily is made up of three wine barrels, and in Egypt is seen a figure suggesting both the Khedive and the Sphinx.

Although Rose popularized the convention of representing the Russia as a menacing octopus, it was in fact the Dutchman J. J. Van Brederode in 1870, who produced the first version of this map, the Humoristische-oorlogskaart. Rose himself reissued this map in several states, two in 1877 - the first was in essence an English language copy of the Brederode map, the second, represented here, is a much more sophisticated production with a far advanced political message. For example the left and right most tentacles have been repurposed to express Russian interests in Finland and Central Asia. Rose went on to issue one more such map, in 1900, entitled 'John Bull and his Friends.' The convention of representing Russia as an octopus afterwards became extremely popular and was adopted by other caricaturists in Japan and elsewhere.