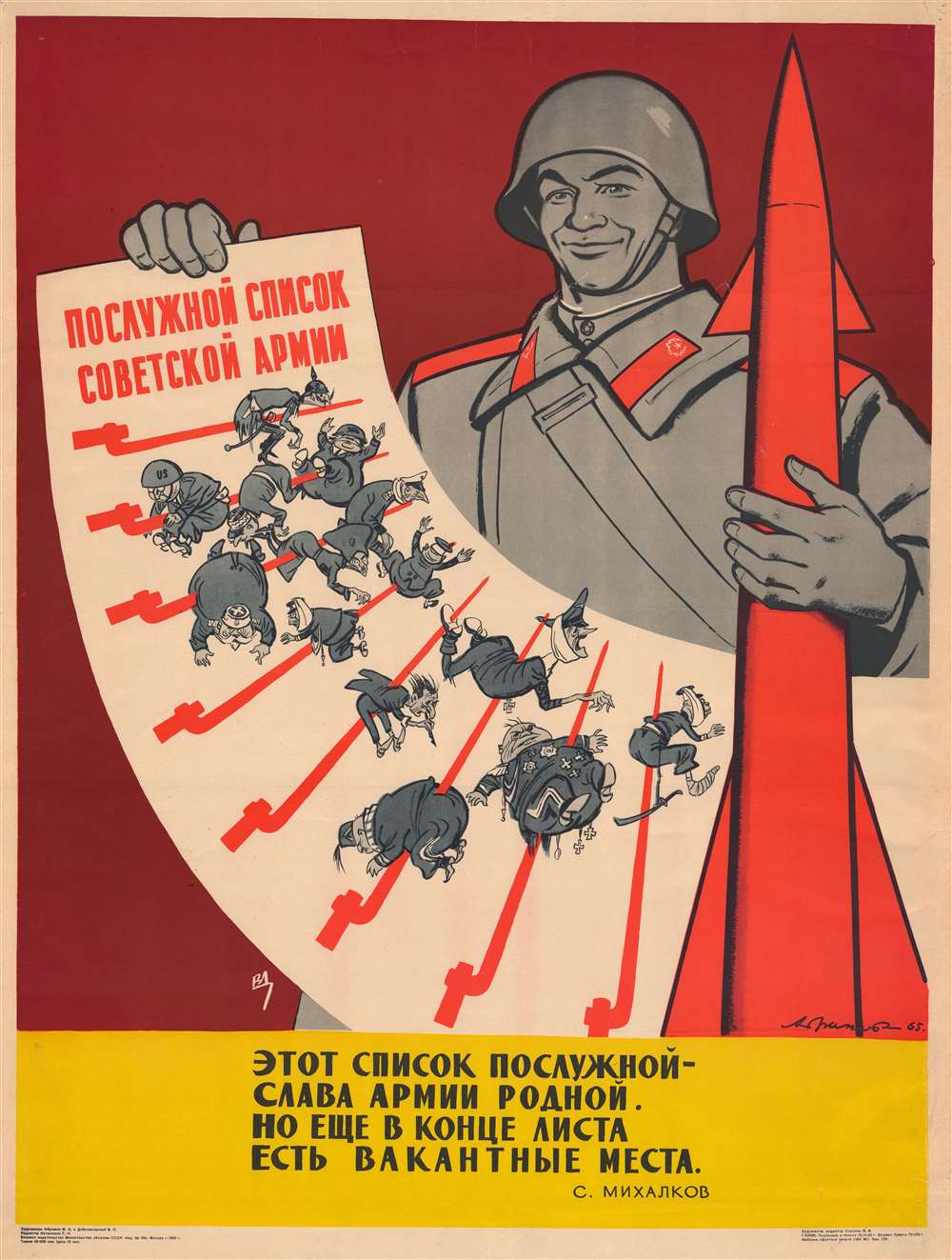 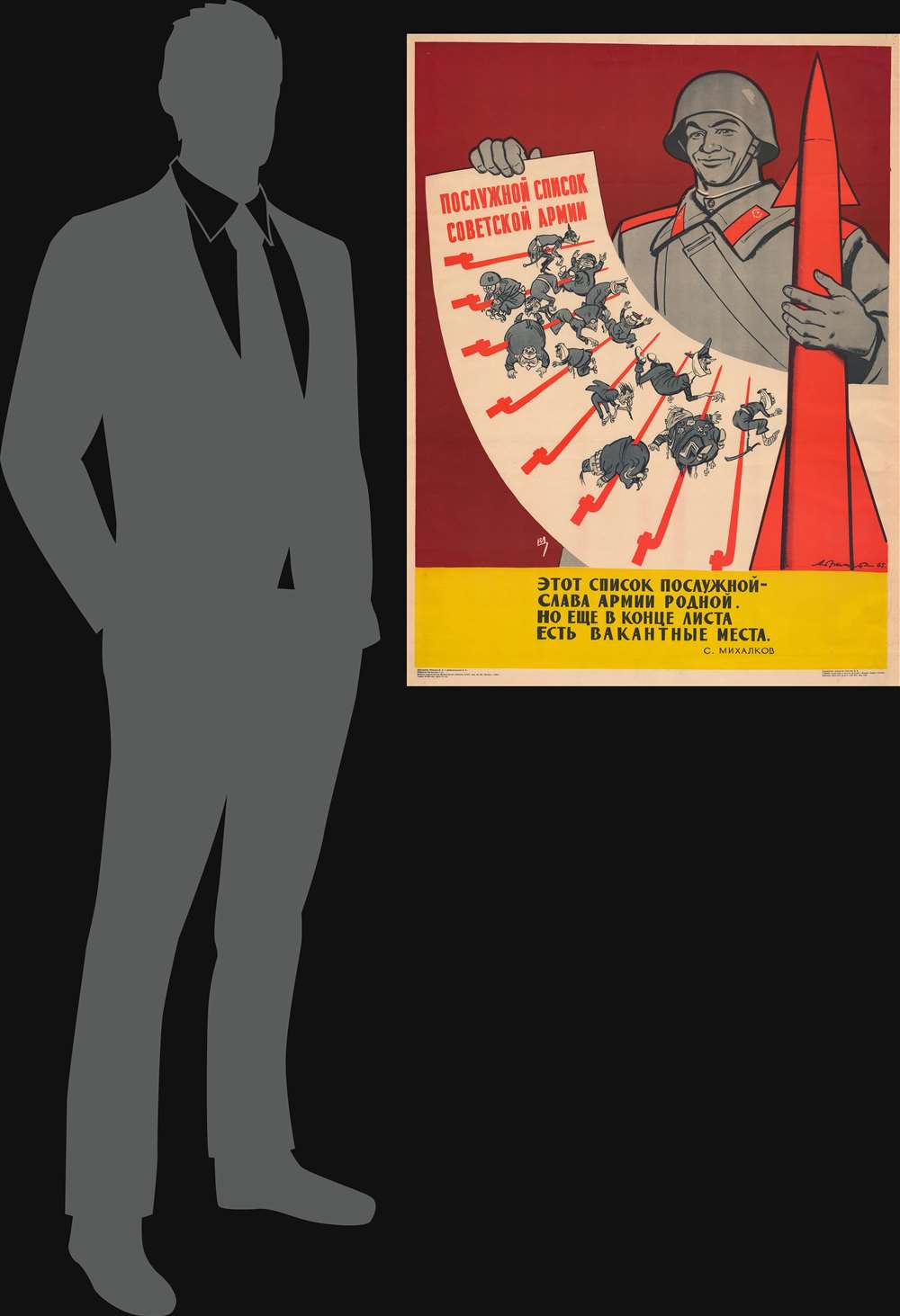 This is a 1965 Mark Abramov and Victor Dobrovolsky Cold War Era Soviet propaganda poster touting the Soviet military achievement. A Soviet soldier, embracing a ballistic missile, unfurls the army 'service record'. The 'service record' takes the form of a scorecard, with commanding generals and leaders of Russia's enemies skewered on bayonets. Most of whom wear pained expressions, and some are easily recognizable, including Kaiser Wilhelm II, Franklin Roosevelt, Winston Churchill, and Hitler, among more stereotypically racist representations of Japanese, Turkish, and Persian potentates. The poster is intended to promote Soviet nationalism and confidence in face of growing anti-Soviet sentiment.

The Cold War was a geopolitical conflict between the United States and the Soviet Union, and their respective allies, the Western Bloc and the Eastern Bloc, which began following World War II (1939 - 1945). The Cold War is generally considered to have begun with the 1947 Truman Doctrine and ended with the 1991 dissolution of the Soviet Union. During the course of the conflict, both the United States and the Soviet Union developed powerful nuclear arsenals. While there was always a threat of nuclear war, the apocalyptic cost of such an exchange kept both sides from engaging in direct warfare. Instead, with no large-scale engagement, the Cold War was fought through various proxy wars, espionage, propaganda campaigns, embargos, and psychological warfare. Each superpower supported major regional conflicts centered around an ideological and geopolitical struggle for global influence.

This poster was created by Mark Abramov and Victor Dobrovolsky and published by the Military Publishing House of the USSR Ministry of Defense in Moscow in 1965. Per text in the bottom margin, the poster had a circulation of 40,000 copies. We have been unable to locate any cataloged examples in institutional collections and have uncovered only a handful of instances where this poster appeared on the private market.

Mark Aleksandrovich Abramov (1913 - 1994) was a Soviet and Ukrainian artist. Born in Kharkov, Ukraine, Abramov went to Moscow to study engineering and studied at the Moscow Civil Engineering Institute from 1931 until 1936. Using the pseudonym Moa, Abramov and his brother Oleg submitted cartoons and caricatures to satirical newspapers and magazines during the 1930s. This led to a career as a satirical artist and his caricatures appeared in Pravda and Izvestiya, along with other leading newspapers, regularly. His work was also published in Krokodil and Ogonyok, two popular magazines. Abramov also enjoyed a successful career as a poster artist, with fifteen released during World War II between October 1941 and April 1945. He continued designing posters after the war, and was awarded the title Honored Worker of Arts of the Russian Soviet Federative Socialist Republic in 1964. Learn More...


Victor P. Dobrovolsky (fl. c. 1940 - c. 1965) was born in Siberia and received no formal training in art. Nonetheless, he became a successful graphic artist, beginning his career in provincial publishing houses as a book illustrator. By the 1950s, Dobrovolsky was working as a caricaturist and poster designer in Moscow. Learn More...