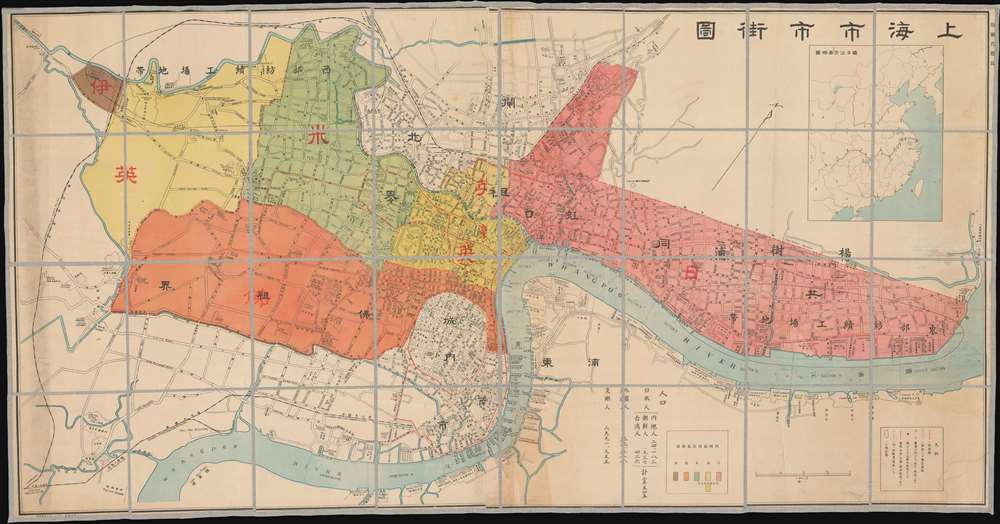 Contemporaneous with the January 28th Incident in Shanghai!
$4,000.00

An impressively proportioned bi-lingual map of Shanghai, China issued by Jichisan Shōkai (ジーチーサン商會) in 1932, during the January 28 Incident. Centered on the Bund, the map covers the Shanghai International Settlement, French Concession, various British Concessions, and the informal Japantown or Japanese Concession. Printed with both English and Chinese text, the map illustrates areas of control, as well as various businesses, roads, and services. It is contemporaneous with the Shanghai Incident of 1932, also known as the January 28 Incident or the Shanghai War (see below). While the Japanese had no official concession in Shanghai, at this time Japanese colonists had largely taken over the former American Settlement north of the Huangpu River. Also, according to the Treaty of Shimonoseki, the Japanese had rights to own businesses in China - something they took full advantage of in Shanghai, as evidenced here. At the bottom there are population notes (Chinese, 2,991,955, Foreigners 33,218, Japanese 25,545), intended to argue for Japanese power and legitimize Japanese claims in the city.

The map employs color coding to define the extra-territorial concessions and zones of administration, particularly the Shanghai International Settlement. The Settlement is divided between the former American Concession (red) largely taken over by the Japanese, the 1846-48 British Concession (yellow), the 1899 expanded International Concession (Green, assigned as American), additional 1901 expansions along the Extra-Settlement Road System (light yellow), and a final 1909 Extra-Settlement Road Expansions to Jessfield Road (Zhongshan) ultimately denied by the increasingly anti-foreign Chinese (brown). Some of these, although not officially part of the International Settlement, were administered and developed by the settlement, such as the brown area at far left - in this zone specifically, we can see the Toyoda Cotton Spinning Company, precursor of the modern conglomerate Toyota. The French Concession, (orange) appears below the International Settlement and is at its ultimate expression.

On April 6, 1849, Lin Kouei (麟桂), the Chinese governor of Shanghai, granted French Consul Charles de Montigny (1805 - 1868) a proclamation ceding extraterritoriality to France in order to establish a trading colony. The Concession initially occupied a narrow collar of land around the northern end of the Chinese City, south of the British settlement, an area of 66 hectares. It was subsequently expended several times. A further small strip of riverside land to the east of the Chinese City was added in 1861, to allow for the Quai de France, docks servicing shipping between China and France. Between 1899 and 1900 the French Concession further expanded, nearly doubling in size with new territory extending west of the original grant. It expanded again in 1914, reaching as far west as modern Huashan Lu (Avenue Haig). By the 1920s, the western part of the French Concession had become the most desirable residential area of Shanghai, popular both with foreign nationals and wealthy Chinese. The concession was mistakenly bombed during the chaotic 1937 Battle of Shanghai, fought between the National Revolutionary Army (NRA) of the Republic of China (ROC) and the Imperial Japanese Army (IJA). In 1943, the French Concession was handed over to the Japanese puppet Wang Jingwei Regime by Vichy France. The turnover was officially ratified after the war by the Sino-French Accord of February 1946, signed by the French Ambassador and Chiang Kai-shek. Today the French Concession, with its tree lined boulevards and French colonial architecture, remains Shanghai's most desirable neighborhood.

This map was published by the Japanese printer Jichisan Shōkai in Tokyo to capitalize on general interest in Shanghai following the January 28 Incident. This map is rare. Beyond our own holdings, we have identified only one other surviving example, in the National Diet Library of Japan.

Jichisan Shōkai (ジーチーサン商會, 1927 - 1945), also known as the 'Graphic Times Sun,' was a Japanese printing, photography, and news concern active in the Kyobashi district of Tokyo during the pre-war period. The firm was founded by the photographer Yamahata Shogyoku (山端祥玉, 1887 - 1963) in May of 1927, Showa 1. Shogyoku had earlier been living in Singapore before returning to Tokyo in Showa 1, importing modern photo processing machinery, and establishing Jichisan Shōkai. Before the outbreak of World War II, Shogyoku was hired to take a series of groundbreaking photos of the Emperor and his family in an attempt to express their humanity - a revolutionary idea that ran counter to the traditional notion of the emperor's direct lineage from the sun-goddess Amaterasu. In 1945, at the end of the Pacific War, the firm changed its name to Yamahata Institute of Photography. In 1947, it was taken over by Shogyoku's son, Yosuke Yamahata (山端庸介, August 6, 1917 - April 18, 1966), who became famous for his heartbreaking photos of the aftermath of Hiroshima and Nagasaki which transformed our global understanding of war. Learn More...