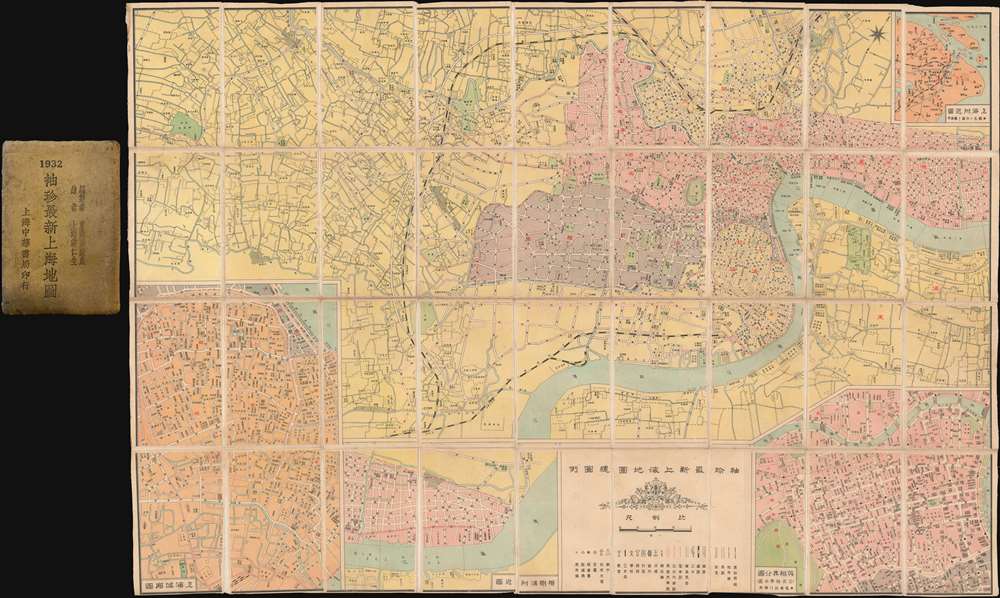 Rare pre-War map of Shanghai by a Chinese owned and operated publishing house.

A rare map of Shanghai, China, published in 1932 by the Shanghai branch of the Chung Hwa Book Company (中華書局有限公司). The map covers all of the concession areas, including the extra-settlement roads extending far to the west. This is one of the few pre-War maps of Shanghai published by a Chinese firm, as most maps at the time were issued by either British or Japanese interests. Interestingly, as a Chinese map, there is also a large inset in the Shanghai Old City, also called the Chinese City, the roughly circular formerly walled area located just south of the French Concession (purple). The map is scarce, probably owing to it being published in 1932, during or shortly after the January 28 Incident, the beginning of the end of concession era Shanghai.

On April 6, 1849, Lin Kouei (麟桂), the Chinese governor of Shanghai, granted French Consul Charles de Montigny (1805 - 1868) a proclamation ceding extraterritoriality to France in order to establish a trading colony. The Concession initially occupied a narrow collar of land around the northern end of the Chinese City, south of the British settlement, an area of 66 hectares. It was subsequently expanded several times. A further small strip of riverside land to the east of the Chinese City was added in 1861, to allow for the Quai de France, docks servicing shipping between China and France. Between 1899 and 1900 the French Concession further expanded, nearly doubling in size with new territory extending west of the original grant. It expanded again in 1914, reaching as far west as modern Huashan Lu (Avenue Haig). By the 1920s, the western part of the French Concession had become the most desirable residential area of Shanghai, popular both with foreign nationals and wealthy Chinese. The concession was mistakenly bombed during the chaotic 1937 Battle of Shanghai, fought between the National Revolutionary Army (NRA) of the Republic of China (ROC) and the Imperial Japanese Army (IJA). In 1943, the French Concession was handed over to the Japanese puppet Wang Jingwei Regime by Vichy France. The turnover was officially ratified after the war by the Sino-French Accord of February 1946, signed by the French Ambassador and Chiang Kai-shek. Today the French Concession, with its tree lined boulevards and French colonial architecture, remains Shanghai's most desirable neighborhood.

The 1910s-20s were a golden age for Shanghai, at least in the Concessions. While China was ruled by Chiang Kai-shek, Shanghai was dominated by several consolidated foreign trade Concessions. Under the strict administrative control of the Concessions, the city became a cosmopolitan haven in the midst of political unrest and a center for global trade and finance. The Concessions occupied what is today central Shanghai's most desirable land, hugging the Huangpu River and Wusong River (Suzhou Creek). These extraterritorial European, Japanese, and American enclaves had modern housing, fine roads, streetcars, elegant shops, clubs, and more. It was a place of excess, art, and extravagance, where fortunes could be made by the enterprising - and lost by the foolish. Moreover, lacking the moral constraints that limited social life in Europe and America, Shanghai became a nexus for the opium trade, sexual excess, gambling, and other vices. This ephemeral world come crashing down on January 28, 1932, when the 'Shanghai Incident' or 'January 28 Incident' pitted the Republic of China against the Empire of Japan. Responding to Chinese student protests against the Japanese occupation of Manchuria, the Japanese Navy bombarded Shanghai. Chiang Kai-shek sent the Chinese army in to defend the Shanghai students, threatening to escalate the conflict. The League of Nations, fearing all-out war, united to demand a ceasefire, which was signed. Nonetheless, most consider The January 28 Incident to be the opening salvo of the Second Sino-Japanese War (1938 - 1945) which ultimately merged into World War II.

This map was published in 1932 by the Chinese owned and operated Chung Hwa Book Company (中華書局有限公司). We are aware of no other examples in any collections, public or private.

Very good. Dissected and laid down on original linen in 36 sections. Accompanied by original binder.
Looking for a high-resolution scan of this?