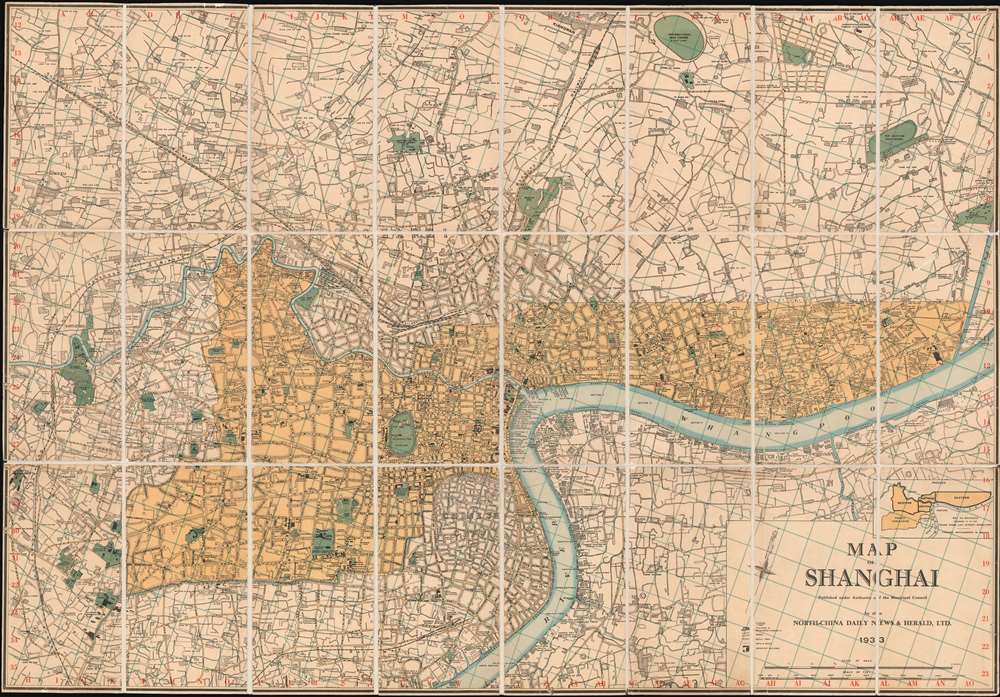 Issued in the final days of Old Shangai just after the January 28 Incident or Shanghai Incident.
$9,000.00

An extremely rare 1933 North-China Daily News and Herald map of Shanghai. Focusing on the Bund and the International Settlement, the map extends from the Shanghai Hangchow Railroad in the west to the Shanghai Baptist College (now the University of Shanghai) in the east. Derived roughly from the Municipal Council Map of the same year, this map is in intensely detailed, with streets, businesses, clubs, parks, government offices, and civic institutions noted. This map was issued shortly after the 1932 Shanghai Incident in the final days of Shanghai's pre-war boomtime.

The Beginning of the End

The 1910s-20s were a golden age for Shanghai. While China was ruled by Chiang Kai-shek, Shanghai was dominated by several consolidated foreign trade Concessions. Under the strict administrative control of the Concessions, the city became a cosmopolitan haven in the midst of political unrest and a center for global trade and finance. The Concessions occupied what is today central Shanghai's most desirable land, hugging the Huangpu River and Wusong River (Suzhou Creek). These extraterritorial European, Japanese, and American enclaves had elegant housing, fine roads, streetcars, elegant shops, clubs, and more. It was a place of excess, art, and extravagance, where fortunes could be made by the enterprising - and lost by the foolish. Moreover, lacking the moral constrains that limited social life in Europe and America, Shanghai became nexus for the opium trade, sexual excess, gambling, and other vices.

This ephemeral world come crashing down on January 28, 1932, when the Shanghai Incident or January 28 Incident (January 28 - March 3, 1932) pitted the Republic of China against the Empire of Japan. Responding to Chinese student protests against the Japanese occupation of Manchuria, the Japanese Navy bombarded Shanghai. Chiang Kai-shek sent the Chinese army in to defend the Shanghai students, threatening to escalate the conflict. The League of Nations, fearing all-out war, united to demand a ceasefire, which was signed. Nonetheless, most consider The January 28 incident to be the opening salvo of the Second Sino-Japanese War (1938 - 1945) which ultimately merged into World War II.

This map is loosely derived from the Municipal Council Map of Shanghai of 1933, but has slightly different coverage, being more inclusive to the north but less inclusive to the west. The Shanghai Daily News published multiple maps of Shanghai in their role as the official record of the British Consulate. This map is rare with the OCLC/WorldCat identifying only one copy, located at the University of Chicago.

The North-China Daily News (August 3, 1850 - March 31, 1951) was a Shanghai-based English-language newspaper active from about 1850 until 1951. The newspaper was founded as the North-China Herald by the British auctioneer Henry Shearman (June 7, 1813 - March 22, 1856). They added a daily publication in 1864, the North-China Daily News. The Herald gained prominence as the official record of the British Supreme Court for China and Japan and the British Consulate. Following Shearman's death, the newspaper was run by a series of competent editors who maintained and increased its position of prominence, such that it became the most influential foreign-language newspaper in China. The newspaper was acquired by Henry E. Morriss in 1901 and in 1924 established a prominent new location, the North China Daily News Building, at Number 17, the Bund. In 1941, during World War II, the newspaper suspected publication. They Herald was never published again, but the Daily continued to be published until ordered to stop in March of 1951 by the Chinese Communist Party. Their offices at the North China Daily News Building were seized by the Shanghai Municipal Government of the People's Republic of China. Learn More...