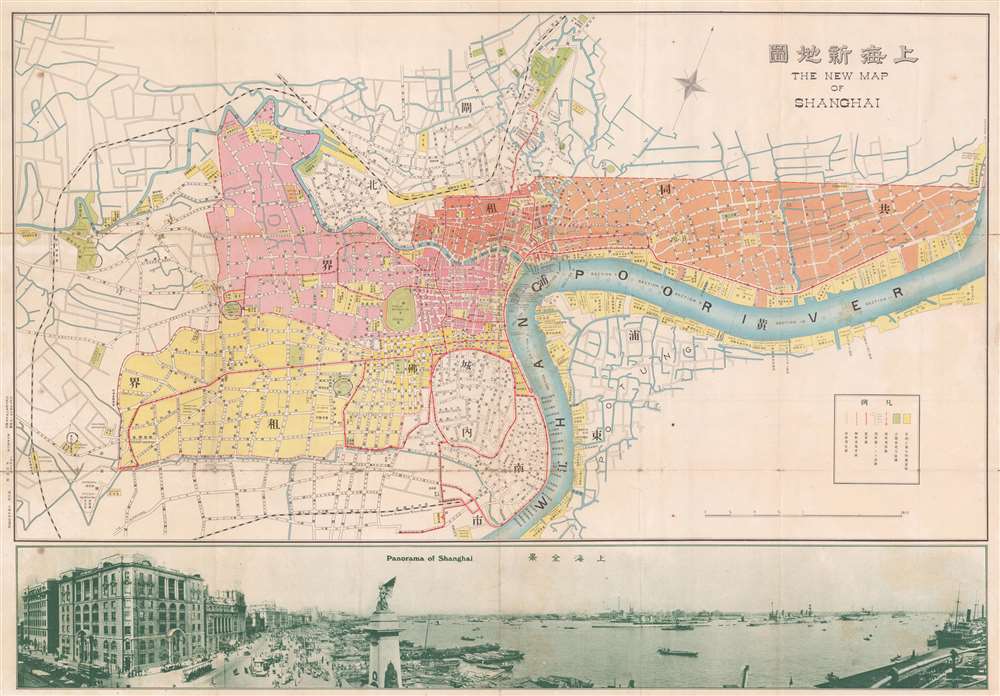 An extremely rare bi-lingual Chinese/English map of Shanghai, China, here in its first edition, issued by the Shanghai-Japanese cartographer Sugie Fusazō (杉江房造) in June of 1926, or Showa 2. This is the first of Sugie Fusazō's maps to include a panorama of the city (more specifically the Bund), a convention that followed in some later editions. The map focuses on the extraterritorial Foreign Concessions huddled around the confluence of the Hunagpu River (Whangpoo) and Soochow Creek (Suzhou). The Japanese area is highlighted in orange, the British in red, the American in Pink, and the large separate French Concession in Yellow. The map extends westward along the Extraterritorial Roads, also administered by the Concessions, as far as the Jessfield Road (Zhongshan) Toyoda Factory, precursor of the modern conglomerate Toyota.

On April 6, 1849, Lin Kouei (麟桂), the Chinese governor of Shanghai, granted French Consul Charles de Montigny (1805 - 1868) a proclamation ceding extraterritoriality to France in order to establish a trading colony. The Concession initially occupied a narrow collar of land around the northern end of the Chinese City, south of the British settlement, an area of 66 hectares. It was subsequently expended several times. A further small strip of riverside land to the east of the Chinese City was added in 1861, to allow for the Quai de France, docks servicing shipping between China and France. Between 1899 and 1900 the French Concession further expanded, nearly doubling in size with new territory extending west of the original grant. It expanded again in 1914, reaching as far west as modern Huashan Lu (Avneue Haig). By the 1920s, the western part of the French Concession had become the most desirable residential area of Shanghai, popular both with foreign nationals and wealthy Chinese. The concession was mistakenly bombed during the chaotic 1937 Battle of Shanghai, fought between the National Revolutionary Army (NRA) of the Republic of China (ROC) and the Imperial Japanese Army (IJA). In 1943, the French Concession was handed over to the Japanese puppet Wang Jingwei Regime by Vichy France. The turnover was officially ratified after the war by the Sino-French Accord of February 1946, signed by the French Ambassador and Chiang Kai-shek. Today the French Concession, with its tree lined boulevards and French colonial architecture, remains Shanghai's most desirable neighborhood.

This map was issued in Shanghai by the Japanese publisher Sugie Fusazō (杉江房造). The map was printed on June 1, 1926 (Taisho 15), and released on June 5. Generally published in both English and Chinese, the English title being 'New Map of Shanghai', this map went through multiple subsequent editions and expansions to about 1947. The present edition is most likely the first edition, as we have isolated no earlier edition an any institutional catalog. The map is scarce with no examples cited in the OCLC. We have identified another example at the University of California, Berkeley, which is also the example citied on Virtual Shanghai.

Good. Map exhibits some restoration, including reinforcements along old fold lines and intersection and minor edge repair. Most significantly, the upper right corner has been reattached from the top border, through the title, to just below the river.

University of California, Berkeley, G7824.S2 1920.N4 Case B.
Looking for a high-resolution scan of this?