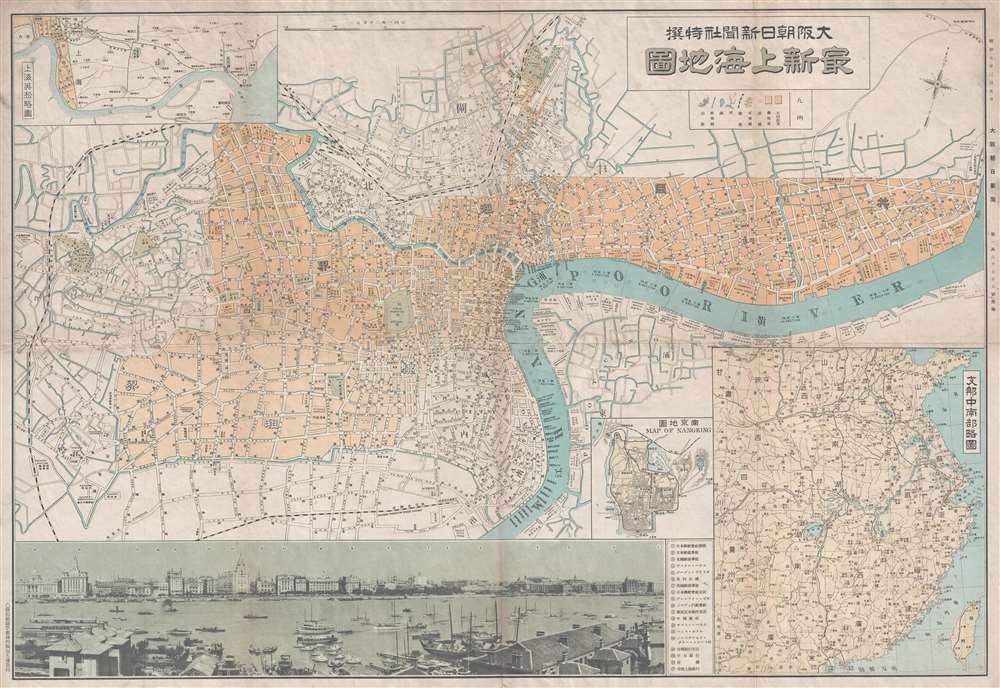 An iconic map of Shanghai, China, featuring a dramatic panoramic photograph of the Bund.
$600.00

This is a rare and attractive Showa 7 or 1932 Osaka Asahi Shimbun map of Shanghai, China. Printed in the 7th year of Hirohito's reign (Showa 7), it depicts downtown Shanghai including the Chinese Quarter, the French Concession, the English Quarter (along the Bund), etc. Important buildings along the Bund are carefully noted, including the first HSBC Bank, the British Club, the Palace Hotel (Swatch Art Peace Hotel), Sassoon House (Fairmont Peace Hotel), and the Customs House. There is also a lovely vintage panoramic photo of the Bund along the bottom of the map. A small inset map of Nanjing or Nanking is also included in the lower right quadrant of the map. Another larger inset shows a regional map. Most of the text is written in both Japanese and English.

This map was issued by the Japanese daily, Osaka Asahi Shimbun, to illustrate events associated with the 'January 28 Incident' or 'Shanghai Incident' (January 28 - March 3, 1932), a conflict between the Republic of China and the Empire of Japan that is considered a precursor to the Second Sino-Japanese War (1937 - 1945) and World War II (1939 - 1945). The 'Incident', described as such to avoid the more in alarming term 'war', was a Japanese power-play in China. Following the 1931 Mukden Incident, or Manchurian Incident, Japan acquired a vast foothold in Manchuria, northeastern China. Seeking a casus belli to justify further military advancement into China proper, the Japanese military instigated a series of seemingly anti-Japanese incidents. These led to Chinese anti-Japanese anti-imperialist protests in the streets of Shanghai which rapidly devolved into armed conflict, with Chiang Kai-shek mobilizing the Chinese Army. With superior firepower and equipment, the Japanese were able to inflict terrible losses on the Chinese Army, which was subsequently forced to redeploy against the Communist insurrection in Fujian. Chiang Kai-shek sued for peace and on May 5th, the Shanghai Ceasefire Agreement was signed. The agreement turned Shanghai a demilitarized zone. China was restricted from garrisoning more than than a minor police force in Shanghai while the Japanese were allowed a small military presence.

This map was issued by the Osaka Asahi Shimbun as a supplement to the March 5, 1932 issue.