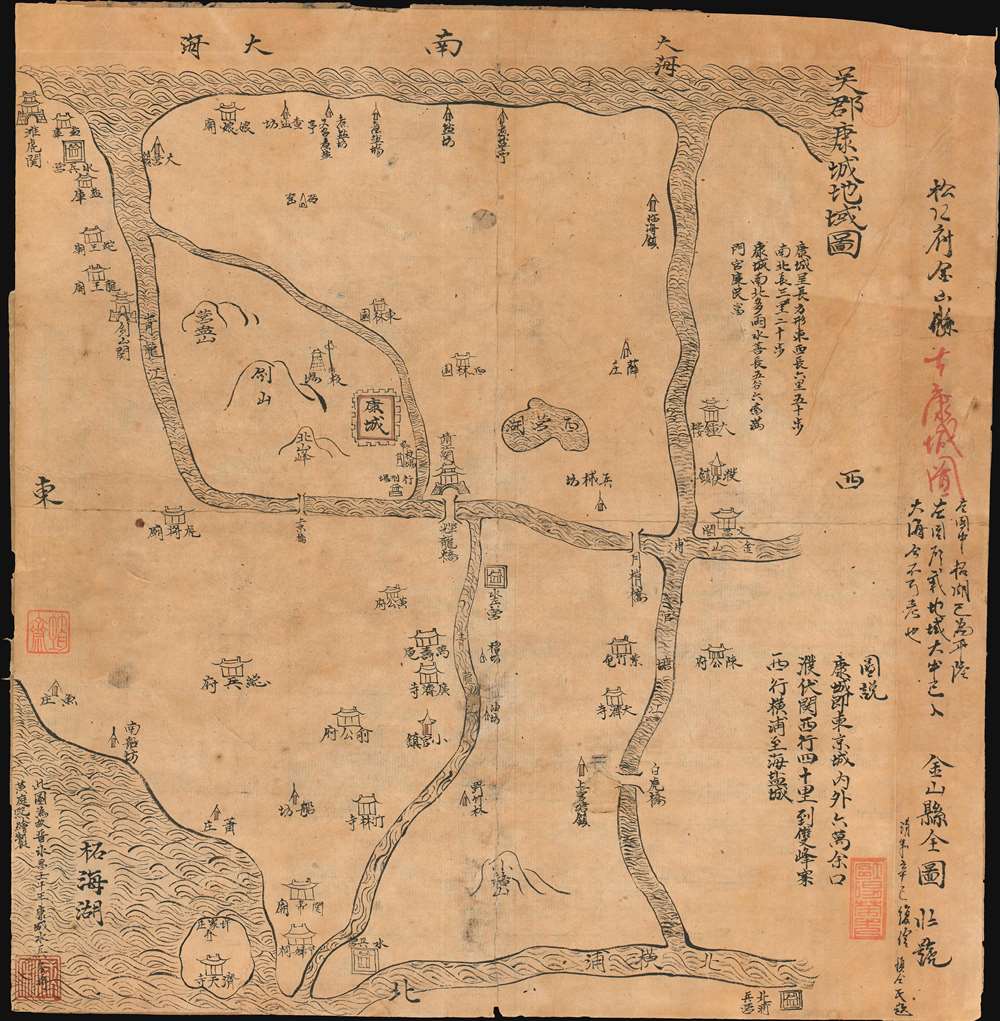 An extraordinary Qing Era Chinese manuscript map by Huang Tingxi (黄廷熙) illustrating the Jinshan District of south Shanghai as it was c. 322. Much of the territory depicted here is today underwater, but this map nonetheless represents the earliest specific cartographic representation of the Shanghai region. In modern terms, the map is oriented to the south, with Hunagzhou Bay at the top. The major city at center is the fortified regional capital of Kangcheng (康城). The map is finely executed with beautiful waves illustrated water areas.

The map based up on the military and marine surveys compiled in 322 (Yongchang 1, Eastern Jin Dynasty) by Huang Tingxi (黄廷熙), an officer of the Kangcheng Marines. It is militaristic in nature, with most locations named being minor fortifications, fortified bridges, and military encampments. The map also indicates trade resources, among them saltworks and fishing encampments - the primary products of the region.

During the 'Spring and Autumn' (771 - 476 BCE), 'Warring States' (475 BC - 221 BCE), and early Imperial periods (202 BC - 1184) periods, Jinshan was a thriving province, with a major fortified city, Kangcheng, appearing here at center, and numerous government buildings, smaller fortifications, and bridges. Jinshanzui Fishing Village (金山嘴渔村), Shanghai's oldest and last surviving fishing village is all that remains of this once thriving county. In 1184 or Chúnxī 11 (淳熙; 1174 - 1189), long before the founding of modern Shanghai, most of the district depicted here was destroyed by major earthquake that inundated the area in series of catastrophic terraforming tsunamis.

The Yu Family Archives comprise one of the most mind-boggling and tragic legacies in the history of the world. Dating to the reign of the Sui Dynasty Emperor Wen (隋文帝; 541 - 604), the archives traced the history of the Yu Family over dozens of generations and nearly 2000 years. They began around 598, when Yu Taigong, the 1st Yu generation, became an assistant minister of the provincial government under the Sui court. In 1418, under the Ming, the head of the family, the 31st Yu generation to maintain the archive, was sent to Jinshan. There the Yu became prominent and married into the locally prominent Huang family. In 1646 (38th generation), the Yu inherited the Huang family archive of 29 scrolls and bamboo sheets recording their own 4-thousand-year history in the Jinshan region. Those documents included this map by Huang Tingxi (黄廷熙).

In the early 1950s Yu Deliang (俞德良) of the 51st Yu Generation, compiled those portions of the Yu Archive that applied to Jinshan for publication as Yu Family Archives: Matters of the Huang House (俞氏家谱·黄公府事略). He had bad timing. The archive was never published and the original Yu Archive, an unprecedented collection of primary materials recording thousands of years of history, were burned during the Cultural Revolution. Only the small abridgement pertaining to Jinshan, which was copied and prepared for publication by Yu Deliang (俞德良) survived. After much tribulation, including a second loss of the manuscript, Yu Deliang's abridgement was published as Jinshanwei Spring and Autumn (金山卫春秋) in 2008. As of 2016 Yu Deliang was still active as a local historian Shanghai.

The map features three different collection chops. We have thus far been unable to assign them, but have deciphered them. The square chop, center left, is 筠齋 (Junzhai). The chop in the bottom left corner is 咸和 (Xianhe). And the large rectangular chop in the lower left is 歐陽榮先 (Ouyang Rongxian). We have not yet been able to associate these seals with known individuals but are continuing to research the matter in the hopes that they will yield valuable provenance.

The present map is a manuscript, likely drafted during the Qing Era from earlier source material. While we have not been able to successfully date the map, we are confident that it is at least 19th century and predates the 1950s Cultural Revolution destruction of the Yu Family Archive. This is a unique historical document and, as far as we can assess, the earliest surviving map to illustrate any portion of Shanghai. There exist variations of this map including copies presumably made in the 1950s for Yu Deliang. This is the earliest we have identified. A once-in-a-lifetime discovery.