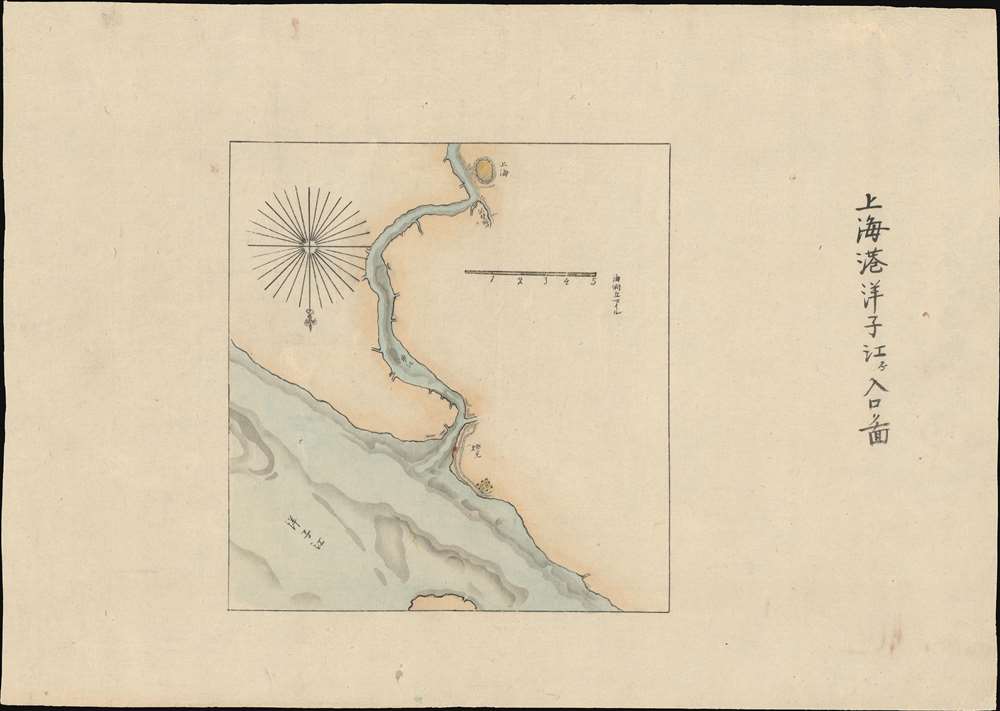 A most unusual manuscript map of Shanghai dating to roughly 1874. Oriented to the south, the map follows the course of the Huangpu River from its confluence with the Yangtze River and the Baoshan Waterway. Although unattributed, the map is most likely the work of Sudo Katsuzō (湏藤 / 湏藤勝三), a Japanese diplomat and cartographer who served on a mission to Taiwan and China following the Mudan Incident of 1871. The goal of the mission was to negotiate reparations with the Qing for fifty-four cannibalized Ryūkyūan sailors.

The map follows the course of the Huangpu inland as far as Shanghai bend, noting the circular fortified Chinese City that was the original Shanghai. It also shows development along the waterfront and along Suzhou Creek (or Soochow Creek) / Wusong (Woosung) River, reflecting the Shanghai Bund and Foreign Concessions. A fort and some construction are also noted at the mouth of the Huangpu.

Manuscript. One of a kind piece.

Sudo Katsuzō (湏藤 / 湏藤勝三; c. 1848 - c. 1874) was a Japanese cartographer of Tochigi Prefecture (栃木県 / Tochigi-ken), Japan. Sudo was part of an 1874 mission to Taiwan and subsequently to the mainland of China. As part of this expedition, he produced a series of maps detailing Taiwan and some major cities in Fujian, including Fuzhou and Xiamen. The quality and execution of the maps suggest that he was experienced in both western and Japanese cartographic styles, indicating that he may have had training as a military engineer. Sudo apparently died of an unknown illness shortly after the maps were made, at just 26, so it is not surprising that little is recorded regarding his history. His maps were subsequently collected by his brother and remained in the family until recently. Learn More...

Very good. Wide margins. Manuscript.
Looking for a high-resolution scan of this?