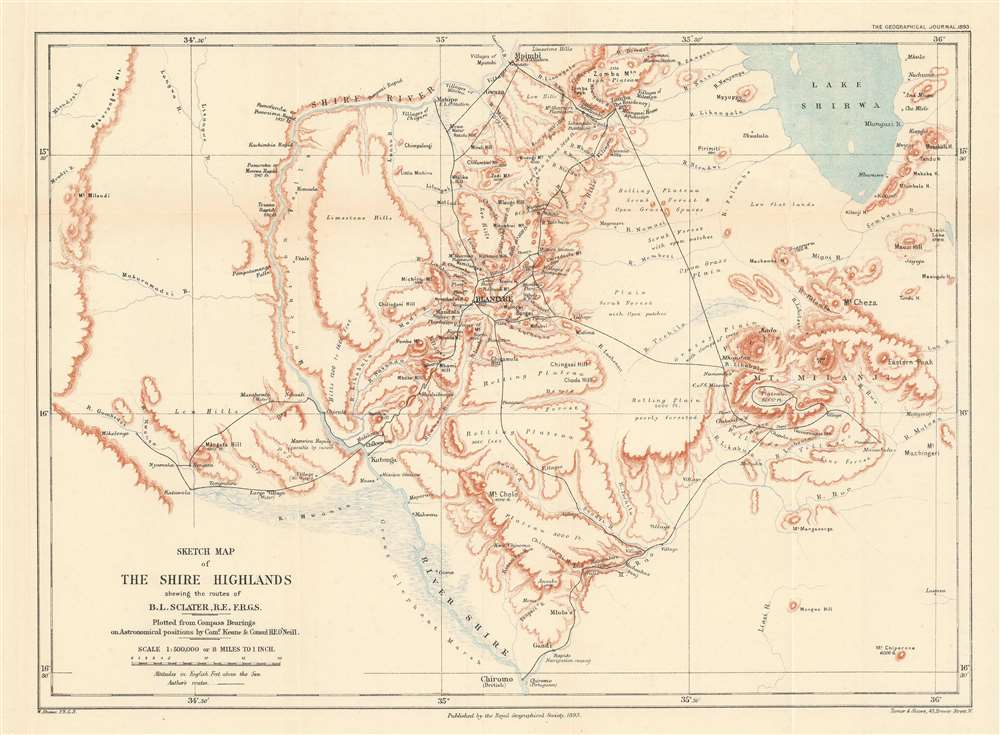 Focuses on the Shire Highlands, a region in Central Africa claimed by both the British and Portuguese.
$450.00

This is an 1893 William Shawe map of the Shire Highlands in Malawi, which then was part of the British Central Africa Protectorate. Depicting the region just south of Lake Malawi, known then as Lake Nyasa, black lines track the movements of Lieutenant B.L. Sclater during the two years when he served as an assistant to the Commissioner of British Central Africa. Numerous towns and villages are labeled, as are rivers, mountains, and other locations. Printed notes, such as ‘open grass plain’ and ‘rolling plain, poorly forested’, provide some insight into the terrain. The Shire River arcs through the left half of the map.

The Shire Highlands, a plateau situated in southern Malawi, are the most densely populated region in the country today. They are also a major agricultural area that covers 7,250 square kilometers. The British first arrived in the area when David Livingstone established a missionary station in 1861. In the following decades, more missions were established alongside British-owned plantations. Because of the large contingent of British subjects in the area, the Shire Highlands held significant influence in the minds of British politicians during the Anglo-Portuguese disputes concerning colonial possessions in central Africa in the late 19th century. Several treaties were refused by either one party or the other, until finally, in 1890, the British issued an ultimatum that the Portuguese withdraw all their troops from Mashonaland, Matabeleland, and all the land between the Shire River north of the Ruo River and Lake Nyasa (Lake Malawi), which included the disputed Shire Highlands. This ultimatum eventually led to the signing of the Anglo-Portuguese Treaty of 1891 and the establishment of relatively firm borders between Portuguese and British colonial possessions in central Africa.

This map was created by William Shawe and published by the Royal Geographical Society in the November 1893 edition of The Geographical Journal to accompany Lieutenant B.L. Sclater’s paper ‘Routes and Districts in Southern Nyasaland’. Three examples are catalogued in the OCLC as being part of the institutional collections at the University of Chicago, the University of Manchester, and The British Library.