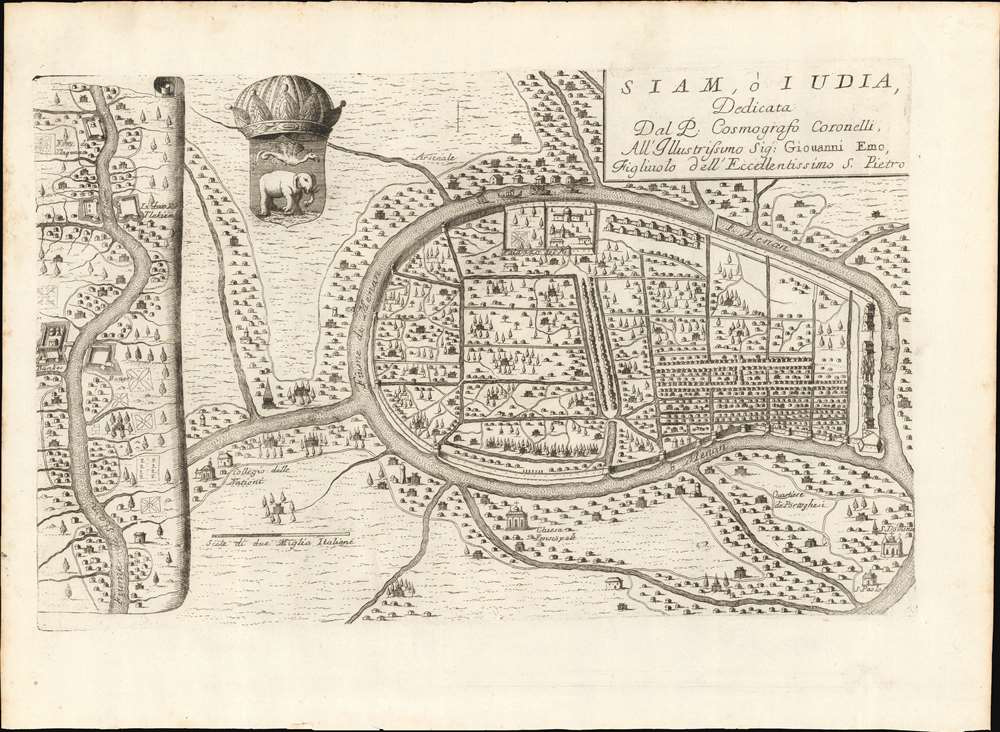 On the cusp of the Siamese Revolution of 1688.

This is V. Coronelli's rare and important 1689 map of Ayutthaya. representing the Siamese capital at the height of the Ayutthaya Period (1351 - 1767), considered a golden age for Thailand. At the time Ayutthaya was the largest most sophisticated city in the world, with a population exceedingly 1,000,000 people. The cartography here immediately predates the 1688 Siamese Revolution, and thus includes foreign settlements, churches, and schools, all of which were violently expelled shortly after. As such, this map also reflects the most sophisticated mapping of the Siamese capital through the 18th century.

This map is divided into two sections:

The larger, at right, illustrates the city Ayutthaya, situated on an island formed by a dramatic curve in the Menan (Chao Phraya) River. It features an elaborate canal system, strong fortifications, and a dense inner city. To the southeast is the 'Quartiere de Portoghesi' (Portuguese Quarter), a well-established trade colony complete with three catholic churches. Further west, in the unlabeled 'French' district, we see the Collegio delle Nationi, according to Fr. João Alvares, a French boys' school established c. 1660.

A secondary map at left follows the Chao Phraya southwards past several fortified positions, most notably Bangkok (Bankoc). Although unlabeled as such, the mapping likely represents French interest in the Chao Phraya and Bangkok, where from 1687 they maintained a troop presence. Moreover, it reflects the French military strategy of Bangkok as 'key to the kingdom', from which traffic along the Chao Phraya could be fully controlled.

The map also features a dramatic rendering of the Siamese royal crest, featuring an elephant and a Garuda.

The Siamese Revolution of 1688

The cartography is based upon reconnaissance collected during Alexandre Chevalier de Chaumont's 1685 visit. Chaumont was the ambassador of King Louis XIV of France to the court the Siamese king, Narai the Great (Ramathibodi III; 1632 - 1688). Narai was obsessed with all things European and welcomed foreign embassies, missionaries, and merchants. He even established Constantine Phaulkon (1648 - 1688), a Greek adventure formerly with the British East India Company, as his Prime Councilor.

Phaulkon's rise to power did not go unopposed. The main opposition was led by Phra Phetracha (1632 - 1703), a member of Narai's extended family. As a traditionalist, Phetracha opposed Narai's open-door policy towards foreigners and was vexed by missionary attempts to convert the throne to Catholicism, the garrisoning of French troops in Bangkok, and Phaulkon's growing influence.

When Narai was on his deathbed in May of 1688, Phetracha launched a coup, the Siamese Revolution of 1688, which placed him on the throne and established the Ban Phlu Luang Dynasty. As King, he was fast to act, expelling foreigners from Ayutthaya while arresting, torturing, and killing Phaulkon. He then led an army of some 40,000 men to Bangkok, which he besieged, eventually forcing the French to abandon Siam entirely. Afterwards, he closed Siam to most foreign influence with only the Dutch permitted trading rights.

Ayutthaya remained the capital of Siam until 1767, when it was sacked at the end of the Burmese-Siamese War (1765 - 1767), ending the Ayutthaya Period and the Siamese Golden Age. The capital was subsequently moved south to the more easily defensible Bangkok.