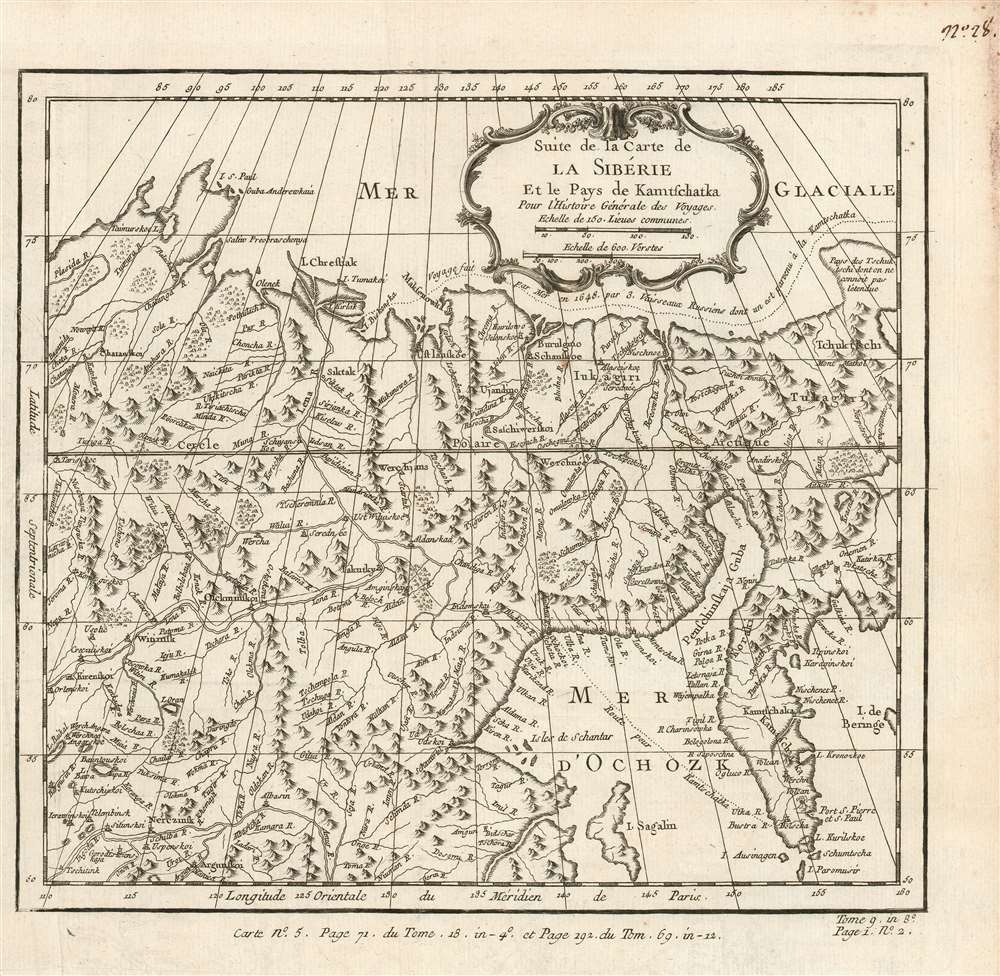 Fascinating Depiction of Siberia based on a Hard-to-Find Source.
$450.00

This is a beautifully engraved 1780 map of northeastern Asia, including Siberia and the Kamchatka Peninsula. Executed by Bellin, the map's details are drawn from the Asian portions of Gerhard Friedrich Müller's landmark 1754 Nouvelle Carte Des Decouvertes. Although Müller is lionized for its revelations of the voyages of Vitus Bering (1681 - 1741) and Aleksei Chirikov (1703 -1748), it also provided remarkably state-of-the-art details for the northeastern extremes of Siberia and Kamchatka. Müller's map was intended to counter the fraudulent maps produced of the same regions by fellow Academians Joseph-Nicolas De l’Isle (1688 - 1768) and Phillippe Buache (1700 - 1773), and the adoption of his geography by no lesser a figure than Bellin is a sign of his success. While mountains are shown pictorially, the delineation of the Sea of Ochosk, Sakhalin Island and the Kamchatka Peninsula is remarkably accurate. The Tschukschi Peninsula is shown in vague hachure, with a note explaining that its size is not understood.

Along the top of the map, tracks indicate the route of an unnamed Russian expedition. This is in fact the little-known 1648 voyage of Cossack Semen Ivanovich Dezhnev (1605 - 1673). Dezhnev put together a rough and ready expedition to explore the waterways around northeastern Siberia. His company consisted of Fedot Alekseyev, traveling with the merchants Andreev and Afstaf'iev (representing the Guselnikov merchant house), who provided their own ship, and Gerasim Ankudinov, an experienced sea captain with his own ship and some 30 men. Dezhnev, along with Mikhail Stadukhin, recruited some 19 men of their own and procured a traditional kocha ship. Including escort vessels, a total seven ships sailed from the mouth the Kolyma River, along the Siberian Arctic, to the Anadyr River north of Kamchatka, and in doing so became the first Europeans to sail through the Bering Strait some 80 years before Vitus Bering. Dezhnev described rounding a large mountainous promontory identified as Chukchi, Tschuktschi, or Chukotka Peninsula. Of the seven vessels the multiple leaders, only three ships, including Dezhnev’s, survived the passage. Dezhnev's voyage ultimately proved that there was indeed a nautical route from Russia to East Asia, but at the same time confirmed that it was exceedingly impractical.

The separate map appears on the market from time to time but is neglected in institutional collections: OCLC lists only four examples of this map. La Harpe's Abrégé de l'histoire générale des voyages is well represented in institutions.


Gerhard Friedrich Müller (Фёдор Ива́нович Ми́ллер; October 29 1705 - October 22 1783), also known as Fyodor Ivanovich Miller, was a Russian-German historian, ethnologist and cartographer. He was born in Herford and educated at Leipzig. In 1725, he was among the European scholars invited to St. Petersburg to co-found the Imperial Academy of Sciences. Müller took part in the Academy's Great Northern Expedition (Second Kamchatka Expedition; 1733 - 1743), he and eighteen scientists and artists traveled the area to perform ethnological and botanical studies, as well as collecting data for the creation of maps. Müller's descriptions and categorizations of clothing, religions and rituals of the Siberian ethnic groups earned him the title 'father of ethnography.' He produced an essential map of the arctic and sub-arctic regions of the Pacific in 1754, motivated to counter the geographic frauds perpetrated by Joseph Nicholas De l’Isle (1688 - 1768) and Phillippe Buache (1700 - 1773). He knew both Vitus Bering (1733 - 1743) and Aleksei Chirikov (1703 - 1748), and was as close to his subject matter as any cartographer of his age. Learn More...

Very good condition. Left margin close but complete. Some soiling at right margin away from printed image. Else excellent with a bold sharp strike.