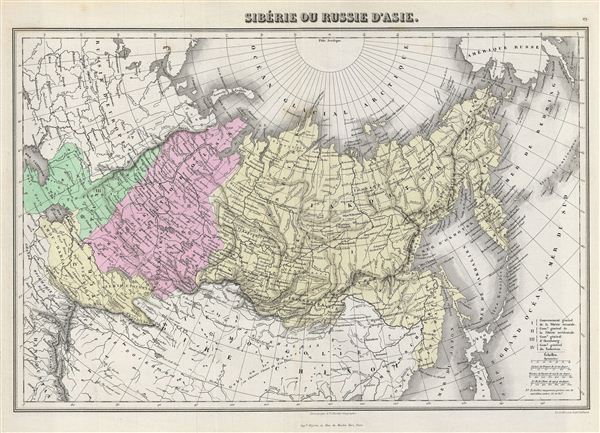 This is a fine example of J. Migeon's 1878 map of Russia in Asia. Migeon's map covers the Russian empire in Asia from european Russia and the Ural Mountains to the Bering Strait and from the Arctic Circle south as far as the Chinese empire. Parts of neighboring China including Japan and Korea, Hindustan, and european Russia are also detailed. The disputed the disputed sea between Japan and Korea is here identified as the 'Sea of Japan.' Migeon identifies various railway lines, rivers, mountain passes, lakes and other topographical features. Migeon's Geographie Universelle, published in Paris, is one of the last great decorative atlases of the 19th century. It contains many stylistic elements of early 19th century cartography such as full hand coloring, numerous decorative vignettes, and high quality paper. This map was issued as plate no. 29 in Migeon's 1878 Geographie Universelle.