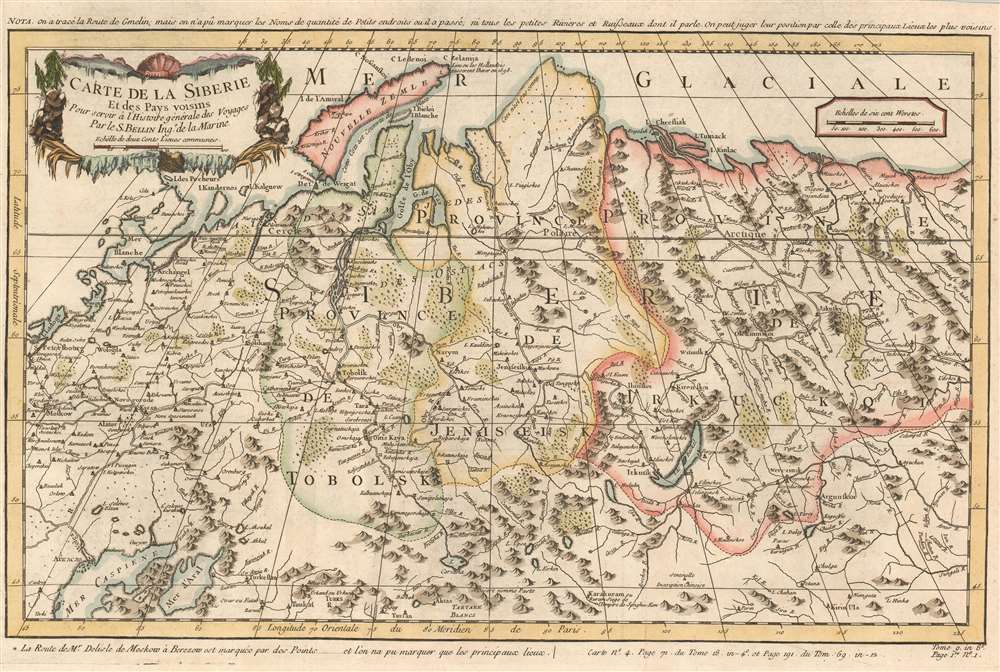 This is a 1780 Jacques-Nicolas Bellin map of Siberia. Depicting the region from Moscow and St. Petersburg to central Asia, numerous cities, towns, and villages are labeled. The region's rivers are illustrated in detail, along with its many mountain ranges.

Two routes are traced from western Russia east into Siberia. The first, and most consequential, follows the beginning of Johann Georg Gmelin's part of the Second Kamchatka Expedition, led by Vitus Bering. Gmelin left St. Petersburg in August 1733 and traveled through the Urals and western Siberia to Yeniseysk. On this expedition, Gmelin became the first person to scientifically prove that the Caspian Sea is, in fact, below the level of the Mediterranean. Gmelin finally reached Bering's headquarters in Yakutsk in September 1736, three years after he left St. Petersburg. The second expedition followed on this map is that of Nicoals De L'Isle, brother to the famed French cartographer Guillaume De L'Isle, between Moscow and Berezow. De L'Isle was in Russia working for the Imperial court as a cartographer, but we have been unable to find any details about this excursion from Moscow.

Originally created for of Abbé Prévost's Histoire Générale des Voyages by Jacques-Nicolas Bellin, this map was published by Jean François de La Harpe's in his Abrégé de l'Histoire Générale des Voyages in 1780. Five examples of the 1780 edition of this map are cataloged in OCLC. They are part of the institutional collections at Brown University, Universitätsbibliothek München in Munich, Bayerische Staatsbibliothek, also in Munich, Universitätsbibliothek Bern, and the National Library of Poland. The works by Prévost and de la Harpe are well represented institutionally.