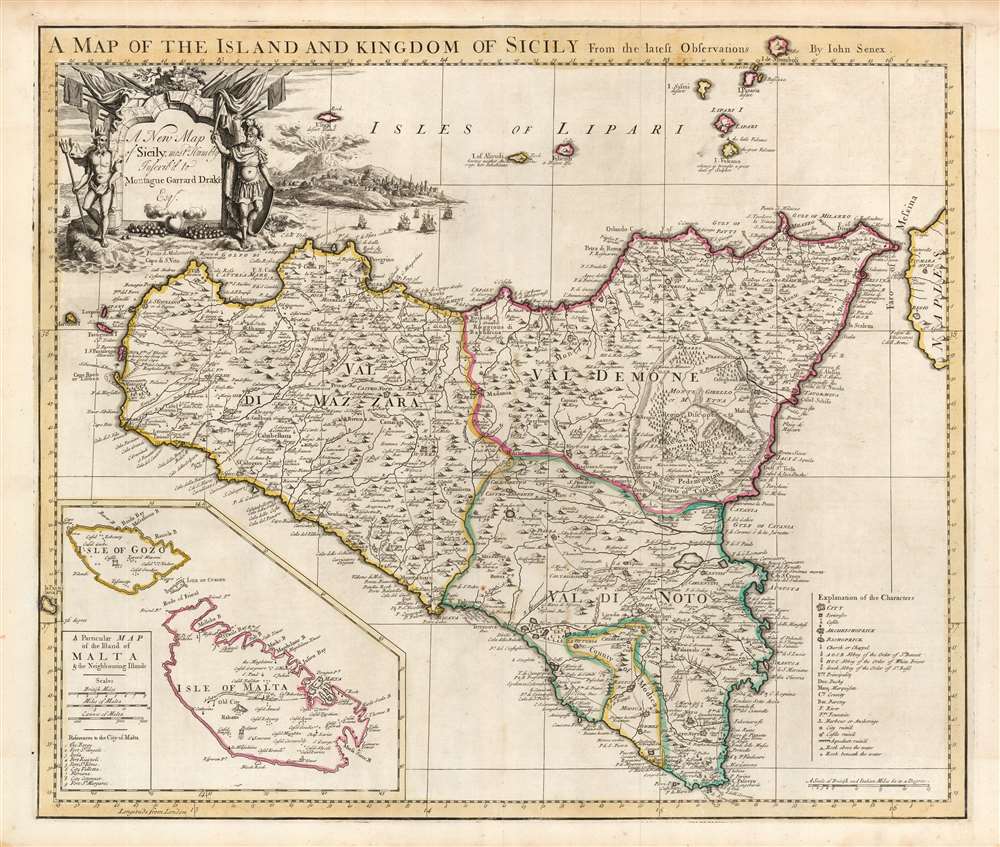 This is a beautiful example of John Senex's 1721 map of Sicily and Malta. It was the largest and most detailed English map of the island printed to date, pictorially showing the island's mountainous terrain with particular attention to its famous volcano, Etna, its vineyards, salt pans and post roads, and cities. The map is a faithful translation of Guillaume De l'Isle's 1717 Carte de l'Isle et Royaume de Sicile.

The source for this map, De l'Isle's 1717 map, was typical of its author's spartan work in its lack of decorative embellishment. Senex corrected this omission with the addition of a dramatic cartouche, dedicating it to Montague Garrard Drake (1692 - 1728), a British Tory politician who sat in the House of Commons between 1713 and 1728. The character of the cartouche is both classical and martial: the title and dedication are presented in an archway, surmounted with laurels and banners on spears. The arch is flanked by representations of Neptune, god of the sea, and Mars, god of war. At their feet are piles of cannon shot and a bomb, fuse lit, perhaps underscoring the volatile nature of the region.

A Theatre of War

The content of the map, dating to 1717, shows the island following the Peace of Utrecht (1713 - 1714), which took the rule of Sicily from Spain and assigned it to the House of Savoy. That year, Spain moved to retake their Mediterranean possessions with a large fleet. Britain, which emerged from the War of Spanish Succession (1701 - 1714) a naval power, sent a fleet to assist Savoy against the Spanish despite diplomatic efforts to avoid war. Despite a resounding British victory in the ensuing battle of Cape Passaro, and the outbreak of the War of the Quadruple Alliance (1718 - 1720), Spain was able to retake and hold Sicily.

Senex's map preserves not only De l'Isle's place names and topography, but also his detailed legend. Using the symbols explained there, the reader can distinguish cities and towns of varying magnitudes, fortresses, castles, abbeys, bishoprics, and archbishoprics; even fountains and dangerous coastal rocks are included. The map also shows ruined castles, cities and aqueducts: most of these appear in the Val di Noto in the southeastern part of Sicily - the area most brutally hit by the 1693 earthquake.

The map includes an inset of the islands of Malta and Gozo at a much larger scale than the main map. The inset details Malta's villages and fortifications, with a particular note of an underground aqueduct supplying Valetta. Their inclusion here is indicated by the feudal relationship between the Kingdom of Sicily and the Knights Hospitaller: the Kingdom granted the militant order Malta, Gozo, and the city of Tripoli in return for the annual tribute of a single falcon (the original Maltese Falcon.)

This scarce map was engraved by John Senex for inclusion in his 1721 A New General Atlas. Perhaps forty examples of the atlas are catalogued in institutional collections. Only six examples of the separate map are listed in OCLC.

Senex, John, A New General Atlas Containing a Geographical and Historical Account of all the Empires, Kingdoms and other Dominions of the World ... 1721, (London: Browne) 1721.