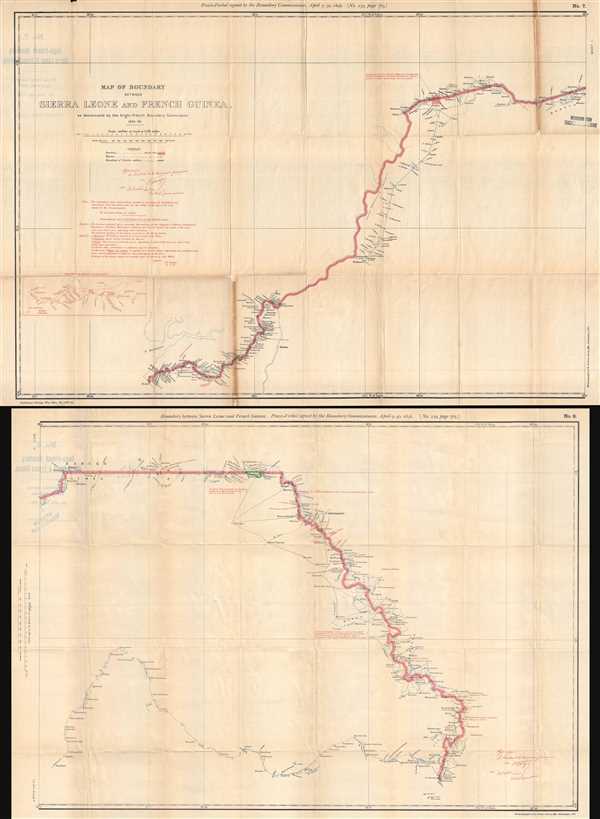 An official map created by the Anglo-French Boundary Commission.

This is an 1897 War Office Intelligence Division map of the border between Sierra Leone and French Guinea printed on two sheets. The map depicts the region from Kiragba, Sierra Leone to Mount Konkonante in French Guinea. A highly detailed depiction of the boundary region, innumerable locations along the border are labeled. Nearly two hundred beacons were placed along the border and each is labeled with the corresponding number, which were fully catalogued in the report of the procès-verbal. Numerous rivers and mountains are also labeled. All of Captain Millot's handwritten corrections and observations, which were noted on the copy of the map that the commissioner's signed, have been printed in red along the boundary. Notes from Lieutenant Colonel Trotter of Great Britain concerning Captain Millot's notes are also included. An inset map depicting the border from the confluence of the Kora and Kolinte Rivers to the village of Kankouya is also included on the left side of sheet one.

This map was prepared by the Intelligence Division of the War Office, printed by the Ordnance Survey Office, and published in 1897 on two sheets.