1981 Syed and Survey of Pakistan Map of Sindh Province, Pakistan 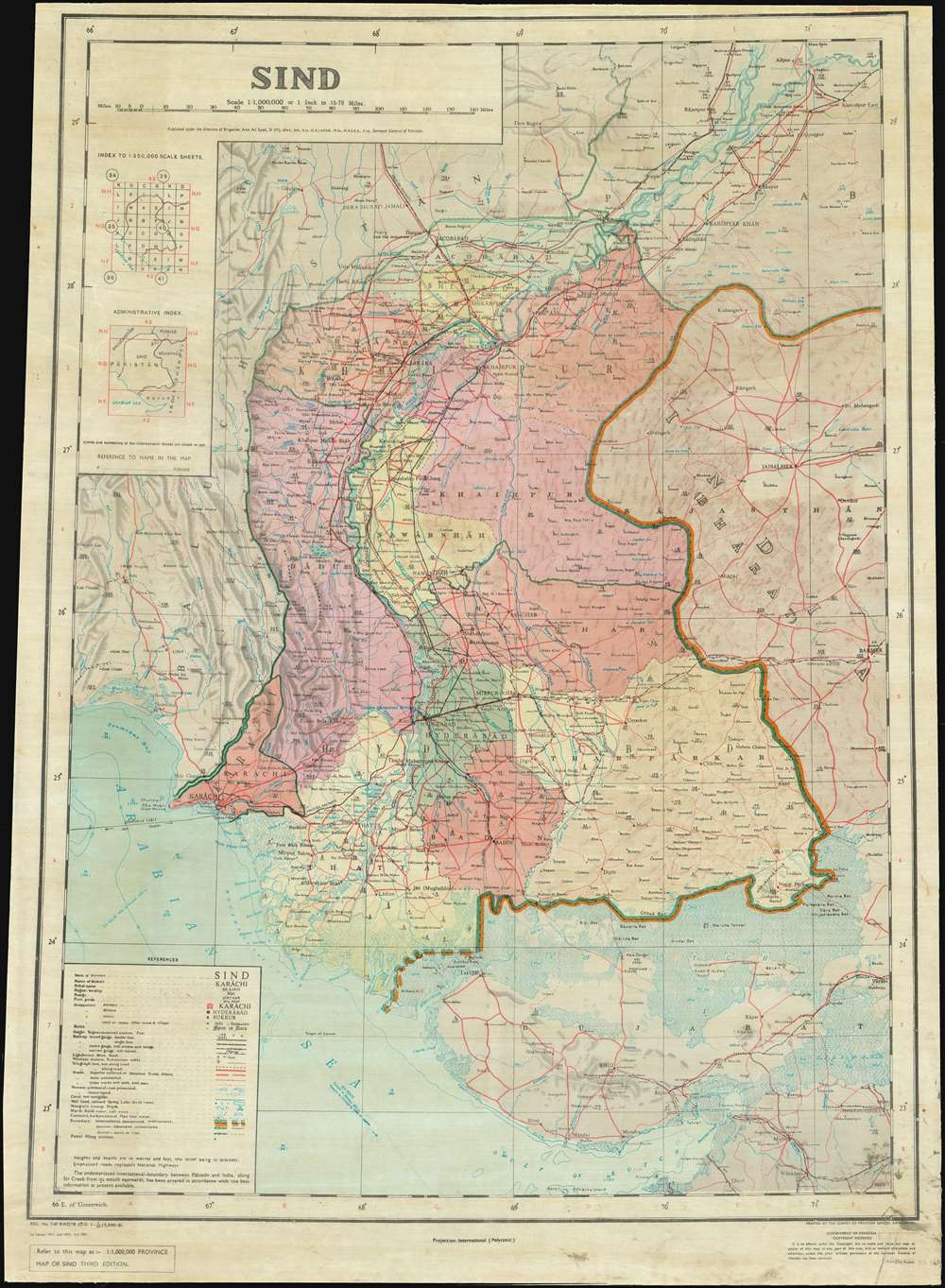 1981 Syed and Survey of Pakistan Map of Sindh Province, Pakistan

A detailed map of Sindh Province in Pakistan, a province which borders India.

This is a 1981 Anis Ali Syed and Survey of Pakistan map of Sindh Province in southeastern Pakistan, one of the four provinces of Pakistan. The map depicts the region from Balochistan to India and from Alipur in Punjab Province to the Gulf of Kutch. Highly detailed, cities, towns, and villages are labeled throughout the province, including Karachi, Hyderabad, and Sukkur. Roads (illustrated in red) and railroads (marked in black) snake their way across the province, with differences between road grades and railroad gauges made evident by differences in notation, all of which are explained in the lower left corner. Telegraph lines, canals, swamps, and marshes are also indicated. The Mouth of the Indus River is illustrated in detail, as are ruins throughout the region. The border between Pakistan and India is marked by two solid green and orange lines next to each other. The sea route between Karachi and Bombay (Mumbai) is labeled, as is the route from Aden to Karachi.

Today, Sindh Province has Pakistan's second largest economy (Punjab Province is first) as well as Pakistan's largest city, Karachi, which is also the provincial capital. Karachi is also Pakistan's most ethnically diverse city. The province is also home to two UNESCO World Heritage Sites, the Historical Monuments of Makli and the Archaeological Ruins at Moenjodaro.

Brigadier General Anis Ali Syed (fl. c. 1981 - 1990) served as Surveyor General of Pakistan from 1981 through 1990. As Surveyor General, he oversaw the publication of several projects, including the Atlas of Pakistan in 1985. He also served as the head of the military unit created to procure supplies for Project 706, the codename for the Pakistani effort to construct a nuclear enrichment facility, known as the Special Works Organization. Learn More...


The Survey of Pakistan (1946 - present) is a department of the Ministry of Defence that is responsible for the creation of topographical land surveys of the country. It is a National Surveying and Mapping Organization and was created after the partition of India and Pakistan as the successor to the Royal Survey of India. It is the only national mapping and land surveying agency of the government of Pakistan. Learn More...