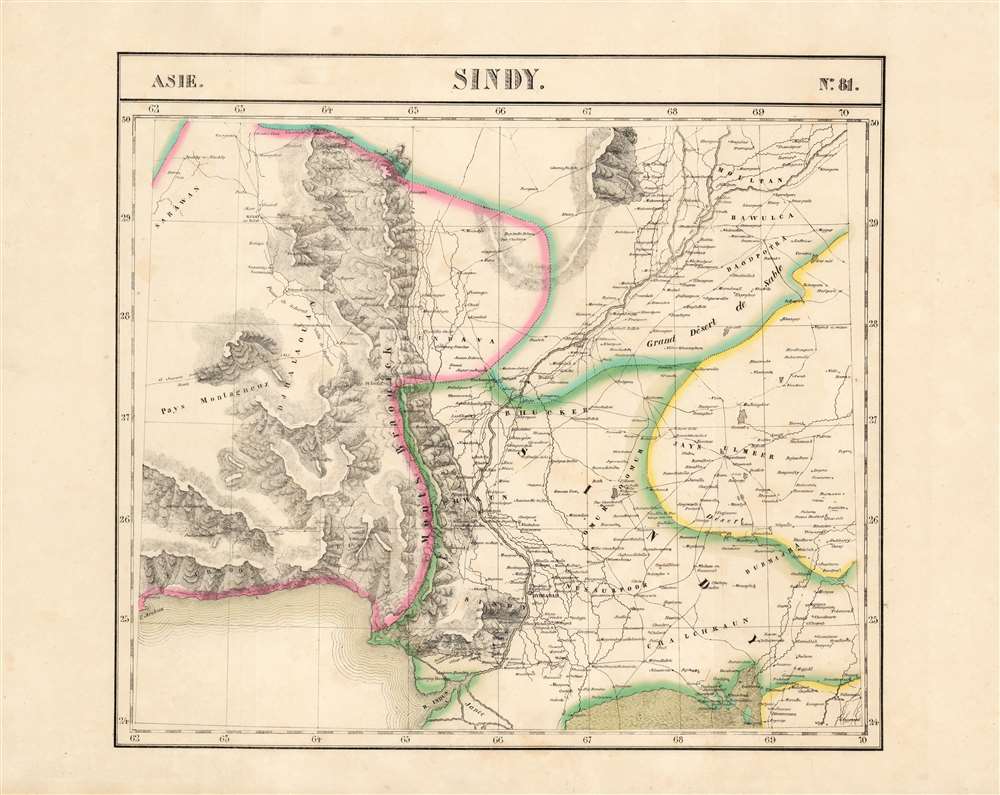 First lithograph map of Baluchistan and the Punjab.
$750.00

This is the 1827 Vandermaelen map of the lower Indus River valley and the Pakistani province of Sindh. It is the first large-scale atlas map to focus on the area, and the first to be executed in lithography. It includes parts of the Punjab, Balochistan, and Rajasthan in northwestern India, as well as the coast of the Arabian Sea from Omara to modern-day Karachi. Topography is pictorial, illustrating the mountains of the province with vigorous hachuring. The River Indus is shown as far north as Moultan, including its juncture with the River Chinnab.

An Illustrious and Rare Source

The map's detailed geography appears to be strongly informed by Sir Henry Pottinger's 1814 A Map of Beloochistan and Sinde which accompanied Travels in Beloochistan and Sinde. The travelogue describes the future Hong Kong Governor's astonishing journey to map the route between Nushki in Balochistan to Isfahan in Persia, disguised as a Muslim. When Vandermaelen composed the present map, Pottinger's description of these regions would remain unmatched by any European traveler. (Pottinger's map appears to be quite rare; we see no examples on the market or in OCLC, and the book is catalogued in only twelve examples.)


Sir Henry Pottinger (砵甸乍, October 3, 1789 – 18 March 18,1856) was an Anglo-Irish soldier and colonial administrator who became the first Governor of Hong Kong. Pottinger represents the absolute best of the British East India Service. He was born in County Down, Ireland and studied at the Belfast Academy before joining the army in India in 1804. In 1806, he joined the British East India Company, serving as a Lieutenant in the 1809 Anglo-Mahratta Wars. In the following year, he partnered with Charles Christie on a bold expedition to map the route from Nushki (Balochistan) to Isfahan (Central Persia). He and Christie disguised themselves as Muslims, separated ways, and both mapped separated routes, before they rejoined in Isfahan. It would be 100 years before another European took this route. The achievement earned him a promotion to Colonel. He became the Resident Administer of Sindh in 1820, and of in the 1830s. In 1839 word reached India that he was to be ennobled and he returned to England to accept the rank of Baronet.

One year later, in 1841, he accepted Foreign Secretary Lord Palmerston's offer to become envoy and plenipotentiary in China and superintendent of British trade. There can be little doubt that he acquired this map at that time, in anticipation of his voyage to China and subsequent posting. The fact that this is the first edition, 1840, rather than the updated 1841 edition, suggests he must have acquired it in London early in 1841.

…examine with care the natural capacities of Hong Kong, and you will not agree to give up that Island unless you should find that you can exchange it for another in the neighborhood of Canton, better adapted for the purposes in view; equally defensible; and affording sufficient shelter for Ships of War and Commerce.

the retention of Hong Kong is the only point in which I have intentionally exceeded my modified instructions, but every single hour I have passed in this superb country has convinced me of the necessity and desirability of our possessing such a settlement as an emporium for our trade and a place from which Her Majesty's subjects in China may be alike protected and controlled. Of course, he was correct and Hong Kong went to become the crown jewel of British colonial enterprise in the far east. Pottinger afterwards went on to be governor of the Cape Colony in 1847, and Governor of Madras in 1848. Learn More...