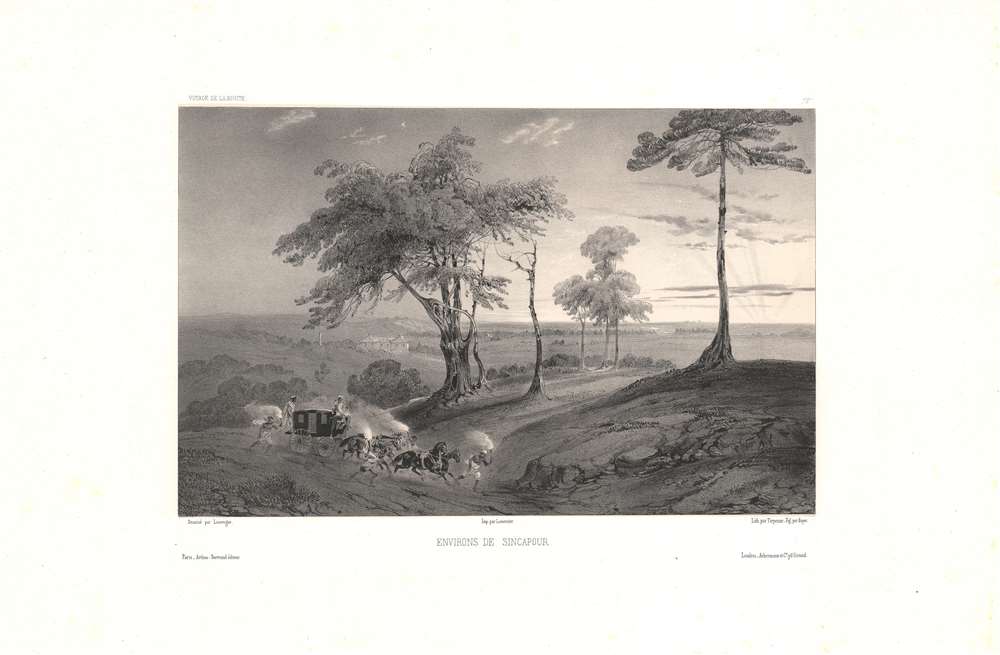 Victorian pastoral aesthetics in the tropics.
$700.00

This is a rare c. 1845 chromolithograph of the countryside of Singapore in the early days of British rule by Barthélémy Lauvergne, one of the resident artists on the Bonite Expedition (1836 -1837), a French scientific and diplomatic circumnavigation.

This view depicts what appears to be the country estate of a British merchant or official in Singapore (not the governor, who resided at the time on Government Hill in the most developed part of the island). The unknown owner of the estate sits in the carriage in the foreground, ushered along the dirt road by torch-bearing attendants. The view highlights the rather untamed nature of the interior parts of the island at the time, as well as the flora of Singapore, of paramount interest to theBonite Expedition (1836 -1837). A rising sun in the background at right presciently suggests a bright future for the island colony.

The French ship La Bonite undertook a voyage of scientific and geographic exploration in 1836 - 1837. Led by Auguste-Nicolas Vaillant (1793 - 1858), the voyage circumnavigated the globe, en route disembarking diplomats at various posts. Along the way, important observations were made that contributed to several fields, especially botany and zoology. A large account of the voyage was written upon the ship's return and divided into thematic volumes, including an album of drawings by the ship's artists, Théodore Auguste Fisquet and Barthélémy Lauvergne. The scientific expedition arrived in Singapore on February 17, 1837 and stayed through February 23; it is safe to assume that Lauvergne sketched this view during the expedition's brief stay.

The Early Days of British Singapore

Stamford Raffles founded Singapore as a British colony in 1819, looking for a site to challenge the Dutch, who had a colony at Melaka from which they threatened to dominate the Straits of Malacca. Finding a sparsely populated but strategically located island at the end of the Malay Peninsula with a natural deep harbor and ready supply of fresh water, Raffles intervened in a factional struggle in the Sultanate of Johor, which nominally controlled the island, supporting one faction in exchange for being granted the island. Raffles then made the critical decision to set Singapore up as a free port. From the beginning, Singapore witnessed rapid growth and high volume as a port, as well as the presence of a diverse set of cultures, including local Bugis and other Malays, Arab traders, ethnically Chinese (Peranakan) merchants, Indian traders and soldiers, Armenians, Parsis, Baghdadi Jews, and others.

This view was originally drawn by Barthélemy Lauvergne in 1837 and was published several years later as Plate No. 75 (of 100) in the Album Historique, a collection of maps and views prepared to accompany Auguste Nicholas Vaillant's Voyage Autour du Monde exécuté pendant les années 1836 et 1837 sur la Corvette la Bonite. It was lithographed by Jean Louis Tirpenne and Adolphe Bayot, edited by Arthus Bertrand, and printed by the firm Lemercier, Benard et Cie. This view is very scarce to the market and is only independently cataloged in the holdings of the National Library of Australia and the National Library Board of Singapore, while the entire Album historique is cataloged in a small handful of libraries in Europe.


Jean Louis Tirpenne (August 26, 1801 - January 17, 1867) was a French-German painter, lithographer, and dramatist active in Paris in the mid-19th century. Tirpenne was born in Hamburg, Germany. He studied painting under Boutron. Tirpenne contributed to the lithographic work associated with the Auguste-Nicolas Vaillant (1793 - 1858) circumnavigation, particularly with regard to the work's views of Singapore. He died in Paris in 1867. Learn More...