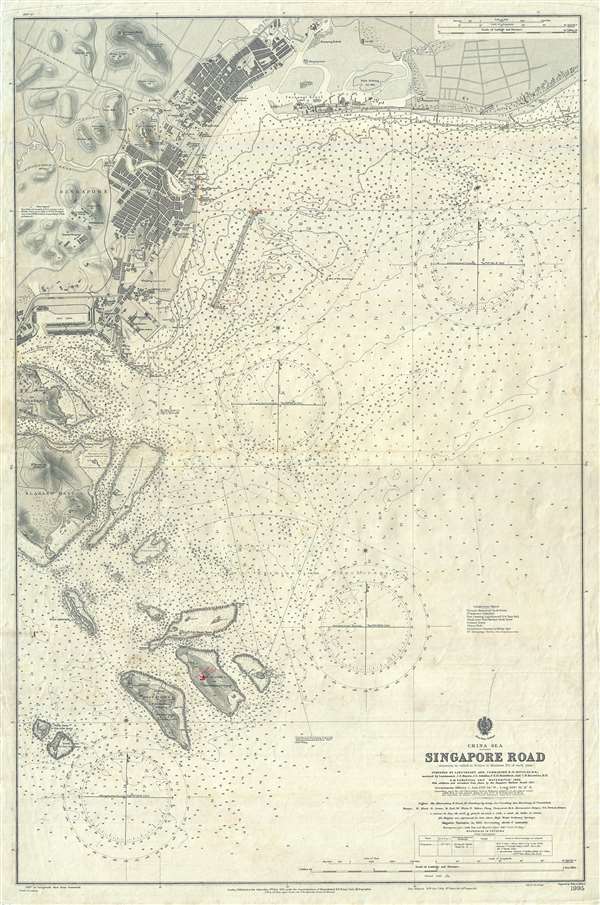 An admiralty chart with a detailed city map of Singapore City.

This is a 1915 British Admiralty nautical chart or maritime map of the city of Singapore and environs. Singapore Island occupies the upper portion of the map, with a highly detailed depiction of the city of Singapore situated in the upper right corner, while the lower portion of the map illustrates a portion of the Singapore Strait. Numerous streets are labeled in the city of Singapore, along with several buildings, including the Victoria Memorial, the Clock Tower, St. Andrew's Cathedral, the Raffles Hotel, the General Hospital, and the Clyde Terrace Fish Market. Fort Canning is illustrated in detail and several of the hills that surround the city are labeled as well, such as Pearls Hill (the location of the Criminal Prison), Morison Hill, Mount Sophia, and Mount Louise. Buildings outside the city proper are also labeled, including the swimming club and the coconut plantation. Myriad depth soundings measured in fathoms are present in the Singapore Strait, aiding mariners in navigating these waters. Several lighthouses are marked by yellow dots and manuscript notations in the strait indicate two lighthouses that were not in operation when this chart was printed. A chart providing tidal information is situated in the lower right corner.

This map was produced by the British Admiralty, engraved by Weller and Addison, and published as chart no. 1995 as a new edition of this chart in 1915.

Very good. Even overall toning. Light wear along margins and along original centerfold. Blank on verso.