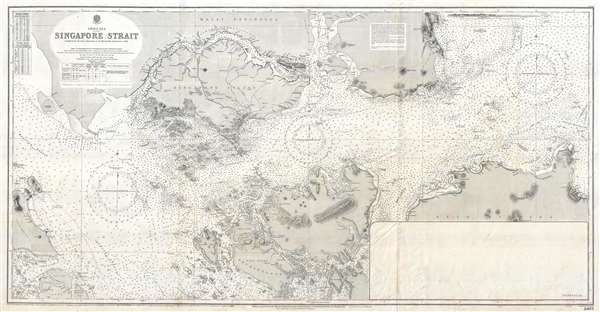 An incredible large format chart of the entire Singapore Strait.

This is a 1927 British Admiralty nautical chart or maritime map of the Singapore Strait. Centered Singapore city and the narrow strait between Singapore Island and Pulo Battam (Pulau Batam) the map extends west as far as the Malacca Strait and east to South Channel and Pulo Bintang (Pulau Bintan), north to the mouth of the Johore River, and south to Pulo Rempang (Pulau Rempang). Singapore town is illustrated in detail, noting individual buildings, including Fort Canning. Myriad depth soundings measured in fathoms are noted throughout, along with numerous islands. The blank area in the lower right corner suggests that this example is possibly a proof state, printed before the proposed inset was completed.

This chart was originally published by the Admiralty in 1914, with small corrections present up to 1927 and was engraved by Davies, Bryer, and Company. It is Admiralty Chart no. 2403.

Very good. Even overall toning. Light soiling. Light wear along original fold lines. Blank on verso.
Looking for a high-resolution scan of this?