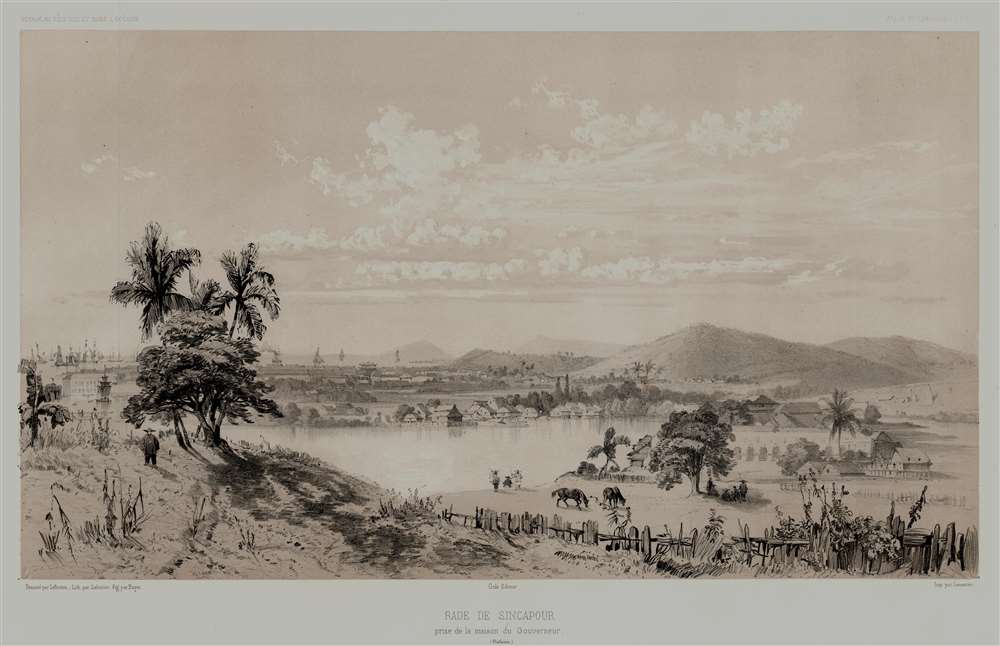 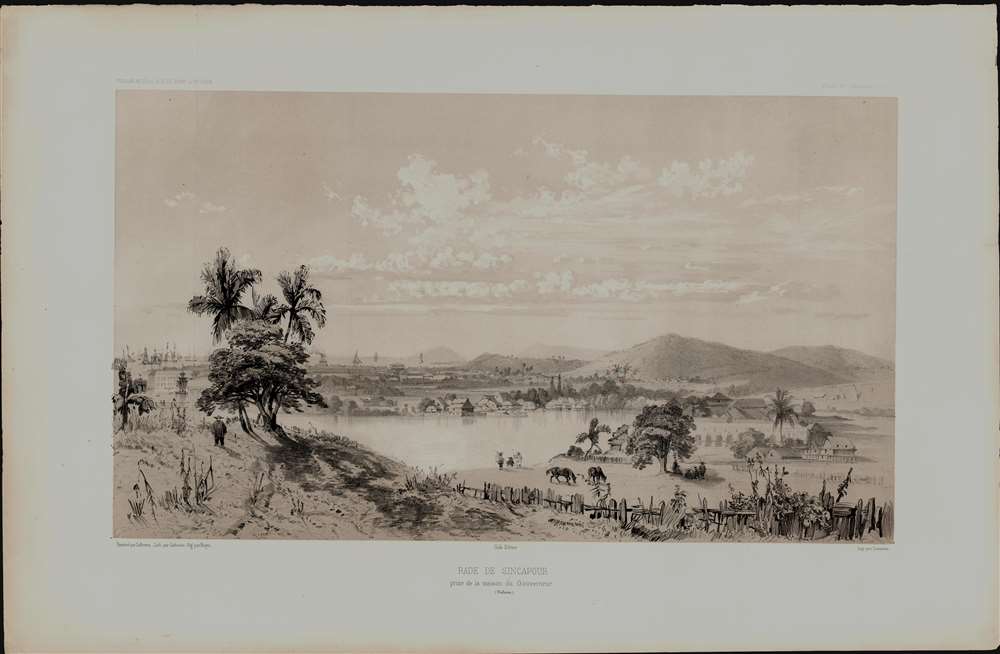 One of the earliest obtainable views of Singapore, this is Eugène Cicéri's 1846 view of Singapore drawn from original sketches and maps compiled during Jules Sébastien César Dumont d'Urville's (1790 - 1842) circumnavigation of the globe. The source sketches were created when d'Urville's ships, Astrolabe and Zellee, were at Singapore between June 27 and July 2, 1839.

The view looks southward from Government Hill (Fort Canning Park) towards Singapore's Chinatown, the Chinese Campong, and the harbor. The widening of the Singapore River at its mouth is the large body of water in the mid-ground. In this distance, Thian Hock Keng Temple (天福宮, dedicated to Mazu, a Chinese sea goddess) notble for its bi-level hipped roof, is recognizable - although the temple was still under construction when d'Urville visited.Singapore's Chinese CampongWhen Stamford Raffles laid out the plan for Singapore in 1822, known as the Master Plan, he allocated the lands west of the Singapore River to serve as a Chinese community - known as the Chinese Campong (Kampong). The land was desirable, with good access to the port, and room to expand. Raffles correctly recognized that Chinese citizens would, in time, comprise the bulk of Singapore's population. The Campong was initially subdivided by Chinese immigrates according to dialect and provincial origin, but these later blended. The area began rapid development in the 1830s and 1840s, with the construction of the impressive Thian Hock Keng Temple, as well as new streets and business. Today it remains a crowded vibrant neighborhood.

Scarcely back from this Second Voyage, Jules Sébastien César Dumont d'Urville's (1790 - 1842) immediately began canvassing for a third voyage - this time to the southern latitudes. Although he hoped to explore the in the tropics (don't we all), King Louis-Phillipe was keen for a French voyage of discovery capable of rivaling Cook's achievements in the Antarctic. He was commanded to place the French flag as far south possible in the Antarctic Waddell Sea. The crew was even promised a bonus of 100 francs when 75° South was attained. His two ships Astrolabe under d'Urville, and the Zélée under Charles Jacquinot set sail from Toulon in September of 1837. Along the way they visited New Zealand, Singapore, Australia, Chile, Brazil Tenerife, the Cape of Good Hope, and more. They crossed the Antarctic Convergence on January 16, 1840 and two days later found themselves in the middle of an ice sea. Pressing on, they hoisted the Tricolour at Cape Geodesie and the voyage hydrographer, Clément Adrien Vincendon-Dumoulin (1811 - 1858) prepared an impressively accurate map of the cost. There, they met the even more ambitious U.S. Exploring Expedition commanded by Charles Wilkes (1798 - 1877). Turning north again, the crew celebrated, popping champagne when they crossed the Arctic Circle and sailed into warmer climes. Back in France, d'Urville was celebrated, promoted to rear-admiral, awarded the gold medallion of the Société de Géographie - their highest honor. Two years later d'Urville and his family died in a tragic train derailment - France's first - on their way from Versailles to Paris.

This view was drawn by the Paris artist Étienne Eugène Cicéri based upon the original sketches compiled by the d'Urville Expedition (1837 - 1840) in 1839. It was engraved and printed by Thierry Frères in Paris for publication by Gide in d'Urville's Voyage au pole sud et dans l'Océanie sur les corvettes l'Astrolabe et la Zélée. Both the atlas volume of d'Urville's narrative (Atlas Pittoresque) and the separate views are extremely scarce. We have identified an institutional example in poor condition in the National Library of Australia, and another at the Library Board of Singapore.

Étienne Eugène Cicéri (January 27, 1813 - April 20, 1890) was a French painter, illustrator, engraver, and theater designer active in the middle part of the 19th century. Cicéri was born in Paris, the son and pupil of the painter and scenographer Pierre-Luc-Charles Cicéri (1782 - 1868). His instruction. In art began as a child under his father and uncle, Eugène Isabey (1803 - 1886). Influence by the Barbizon School of landscape art, he rose to prominence as a landscape pater and watercolorist, working at Fontainebleau, the Alps, and the Pyrenees. He exhibited at the Paris Salon for the first time in 1851 continued to exhibit until at least 1886. He also issued North African landscapes and painted scenes to illustrate the travels of Jules Sébastien César Dumont d'Urville's (1790 - 1842) circumnavigation - all of which earned him a place among the orientalists. Learn More...


Thierry Frères (c. 1827 - 1865) was a Paris base lithography house active in the mid-19th century. In 1827 they were located at Cité Bergère No 1 à Paris. The firm is generally considered to by the successor to Engelmann et Cie. The firm was superbly skillful and prolific, being among the dominant fine-art lithographers in Paris - despite the fact that their firm, operations, and even the full names of the founders are shrouded in obscurity. Learn More...

Very good. Wide clean margins.
Looking for a high-resolution scan of this?