1942 Pictorial Propaganda Broadside of the Japanese Invasion of Singapore 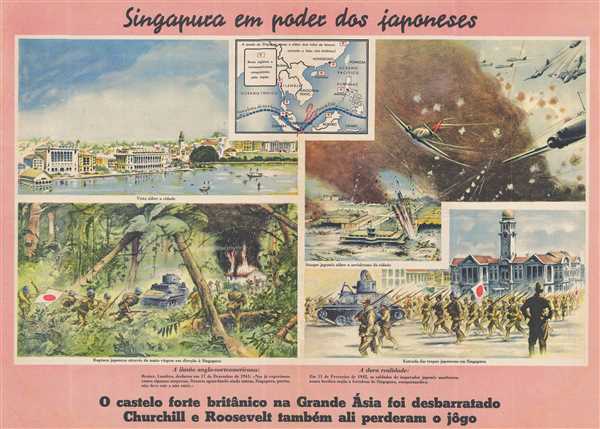 1942 Pictorial Propaganda Broadside of the Japanese Invasion of Singapore

A Portuguese broadside celebrating the Japanese invasion and capture of Singapore.
$2,200.00

This is a 1942 Section IV of the German Army High Command's Department of Wehrmacht Propaganda Portuguese language pictorial propaganda broadside created celebrating the Japanese invasion and capture of Singapore. Sixty thousand British troops in Singapore surrendered to the Imperial Japanese Army on February 15, 1942, an event Winston Churchill called 'the worst disaster and largest capitulation in British history'. While the vignettes on the front of the broadside do not appear to support the Axis or the Allies, the text on the verso proves otherwise. The text derides British and American imperialism, particularly with regard to Britain's militarization of Singapore and highlights Singapore's fortress-like qualities. The text at the bottom of the page congratulates Japan and states that the British and the United States will soon be annihilated.

A Description of the Broadside

The broadside features four vignettes illustrating different aspects of the Japanese invasion of Singapore. A brightly colored idyllic view of the city of Singapore is situated on the top left, with a vignette of the Japanese advance toward Singapore along the Malay Peninsula below it on the lower left. This vignette features Japanese soldiers trekking through the jungle behind a tank, while a building burns in the background. On the top right, the Japanese attack on the airport in Singapore is illustrated, complete with depictions of the famed Mitsubishi Zero fighter aircraft and several other Japanese planes, all adorned with the Rising Sun. The fourth vignette in the lower right corner presents Japanese troops marching into Singapore in front of the Victoria Theatre and Concert Hall. A map of the region, situated along the top between the view of the city and the vignette of the Japanese aerial attack on the airport, notes the British and American military bases that had been conquered by the Japanese and also states, that with the fall of Singapore, the line in the Pacific between the United States and India, Africa, and Europe, had been severed.

On September 1, 1939, the day Nazi Germany invaded Poland and officially ignited World War II, Portugal declared that the 600-year-old Anglo-Portuguese Alliance remained intact, but since the British were not seeking Portuguese assistance, Portugal would remain neutral in the war. In an aide-mémoire issued on September 5, 1939, the British Government confirmed its understanding of Portugal's statement and supported its neutrality. Even so, Portugal played a critical role in the war, particularly with regard to the refugee crisis suffered by so many during the war, and in saving Europe's Jewish population. Several Portuguese ambassadors and consuls general were responsible for handing out visas to refugees and Europe's Jewish community. The Portuguese Ambassador in Budapest, Carlos Sampaio Garrido, helped an estimated 1,000 Hungarian Jews in 1944 and the Portuguese consul general in Bordeaux helped an undetermined number of refugees by issuing them visas. Around 2,500 refugees were evacuated from Gibraltar in July 1940 ahead of the expected German attack and were welcomed by Portuguese Madeira.

Section IV of the German Army High Command's Department of Wehrmacht Propaganda (1940 - 1945), abbreviated OKW / WPr. IV, was the branch of Nazi Germany's Department of Wehrmacht Propaganda tasked with the creation and distribution of foreign propaganda. Led by Lieutenant Colonel Albrecht Blau, the group created foreign-language magazines, disseminated propaganda, and delivered reports and denials to foreign language newspapers. We are aware of broadsides created in Dutch, French, and Portuguese.

This broadside propaganda map was created and published by Section IV of the German Army High Command's Department of Wehrmacht Propaganda in 1942. It is extremely rare, with the OCLC registering only two examples in institutional collections worldwide.

Very good. Light soiling along edges and in corners. Portuguese text on verso.