1861 U. S. Coast Survey Chart or Map of the Chesapeake Bay and Delaware Bay 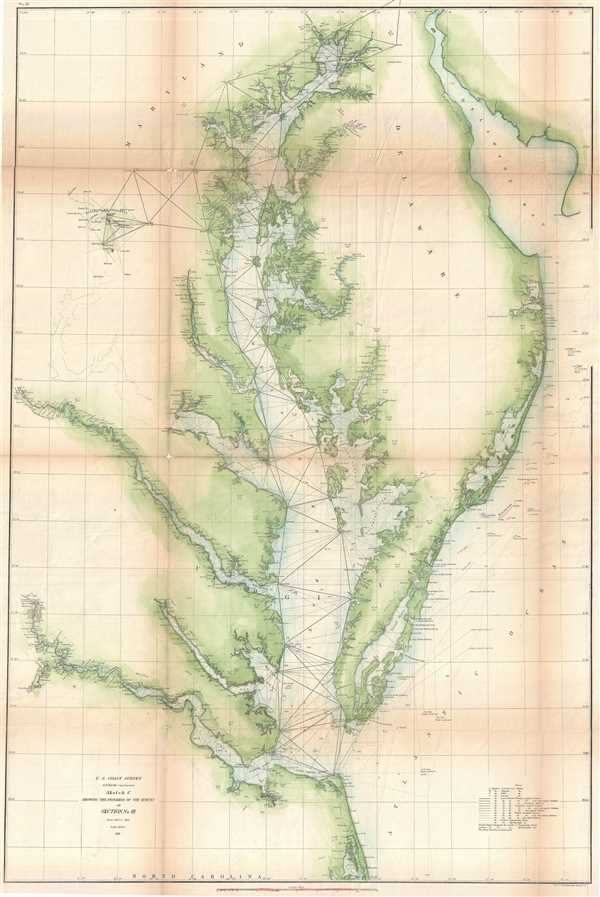 1861 U. S. Coast Survey Chart or Map of the Chesapeake Bay and Delaware Bay

This is an exceptional example of the 1861 U.S. Coast Survey’s progress chart of the Chesapeake Bay. The map covers the from the mouth of the Susquehanna River southward as far as Cape Henry and Norfolk. This chart includes both the Chesapeake Bay and Delaware Bay in full, as well as small portions of the Potomac River, Rappahannock River, York River, James River, Patapsco River, and Patuxent River. Washington D.C., Cape May, Charleston, Baltimore, Annapolis, Chestertown, Easton, Cambridge and Norfolk, are identified. Triangulation points are noted throughout the region as well as all major islands, rivers, and inlets. This map was issued during the American Civil War (1861 - 1865) when the Chesapeake Bay area would become one of the most active theaters. The work of the U.S. Coast Survey, nearly to a man dedicated Union supporters, played a significant role in the superior Union Navy's ability to control the American coastlines, thereby limiting troop movements and strangling Confederate supply lines. Prepared under the supervision of A. D. Bache 1861 Superintendent's Report.