1819 Zurner Map of Slovenia and Croatia 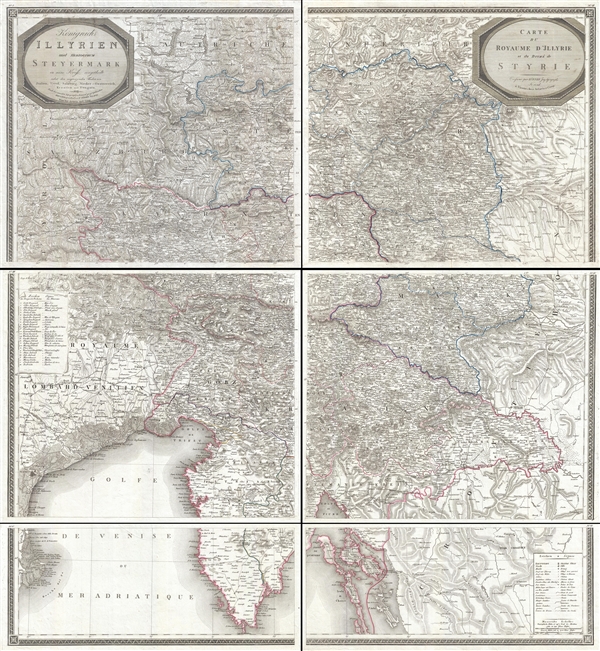 1819 Zurner Map of Slovenia and Croatia

An exceptional and rare 1819 wall map of Slovenia and Croatia by Georg Adam Zürner and Artaria. Centered on Ljubljana (Laibach), the map covers all of Slovenia along with parts of neighboring Croatia, Venice, and Austria It extends from Venice (Venezia, Italy) to Varaždin (Warasdin, Croatia), and from Waidhofen (Austria) to Premantura (Cabo Promontore, Coratia). With it s enormous proportions the map offers stupendous detail throughout, including towns, cities, villages, roads, topography, forests, fortresses, and more. This is doubtless one of this finest maps of this region published in the early 19th century. There are two title cartouches, one in German, another in French, in the upper left and right corners, respectively. Printed in Vienna by Artaria Press.

The present example consists of 6 unjoined panels, as issued. Panels can be joined at the buyer's request prior to shipping to present a single large map. This map is rare with only 3 examples being identified in the OCLC, at least two of which are heavily compromised copies. This may be the finest known extant example.

Georg Adam Zurner (1756 -1809) was an Austrian engineer, publisher, and cartographer active in Vienna during the second half of the 18th and very early 19th centuries. George Adam is the son Jacob Heinrich Zürner, also a cartographer. His cartographic work is limited to maps of Eastern European, particularly Austrian, regions and cities. Learn More...


Artaria and Company (1765 - c. 1890) was founded by Carlo Giovanni Artaria in 1765 in Vienna, then the capital of the Austro-Hungarian Empire. Originally a specialty publisher of sheet music, including works by Hayden, Mozart, Beethoven, and Schubert, the company had expanded its business to include maps by the mid-1770s. The company collaborated with Joseph von Scheda and distributed maps for the Militärgeografischen Institutes. Artaria continued to be a major European publisher well into the 20th century. In 1920, the cartographic section was sold to Freytag and Berndt, who published under the imprint Freytag-Berndt & Artaria. Learn More...