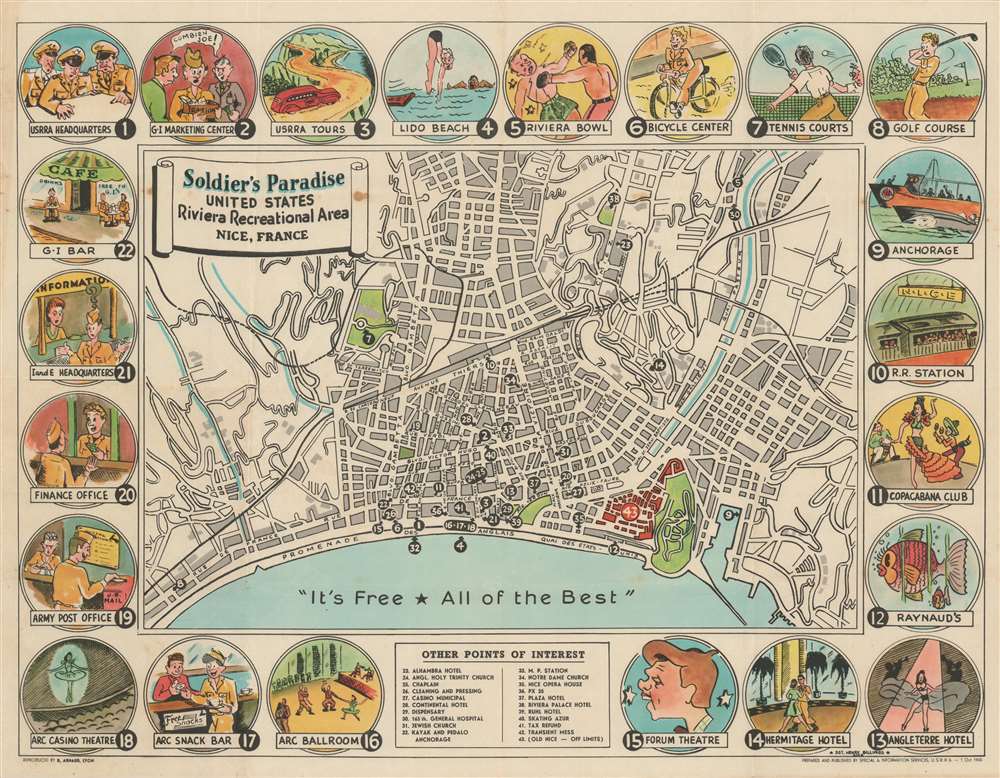 This is a 1945 Henry Billings city plan or map of Nice, France, or the United States Riviera Recreation Area. Published for American soldiers on leave, the map focuses on central Nice, noting Promenade des Anglais and the Quai des Etats-Unis. Numbers mark thirty-eight locations meant to entertain soldiers, including hotels, clubs, theaters, and beaches. Twenty-two vignettes along the map's border and highlight recreational delights. Others appear in a key at bottom center.

Founded in the summer of 1945, the United States Riviera Recreation Center hosted thousands of American soldiers every week for seven days and seven nights. Enlisted men spent their week in Nice while officers were billeted in Cannes. Per a story in YANK Magazine, most soldiers in Nice were on their best behavior. They enjoyed the fantastic food, soft beds, hot water, and, of course, beautiful women. Clubs, bars, and restaurants catered to their needs. The USRRA organized excursions out of town, sporting activities, and other outings, including deep-sea fishing. Nearly everything in town was free for soldiers. Luxuries, such as Coca-Cola, beer, and fruit juice, items not available at the front, were stocked in the post exchange. A post office allowed the men to send gifts and other things home to the United States. The Military Police even took a relaxed view on discipline here, preferring to give the soldiers some leeway and helping them instead of imprisoning them or punishing them in another way. This attitude, in turn, helped the soldiers behave (mostly), along with the desire not to blow the chances for another guy still fighting to be able to get a week's leave.

This map was drawn by Sergeant Henry Billings, published by the U.S. Riviera Recreation Area, and printed by Benoit Arnaud in October 1945.

Benoit Arnaud (October 8, 1823 - 1903) was a French printer and engraver who founded the Imprimerie B. Arnaud in Lyon. Born in Lyon, Arnaud was trained as an engraver and founded his printing firm in 1856 on the rue des Capucins in Lyon. The firm quickly found success and soon had branch offices in both Paris and Marseille. Arnaud's son Rodolphe joined the firm at some point and helped it enter the international market. The firm mainly focused on commercial projects, including letterhead. After Benoit Arnaud died in 1903, Rodolphe took over the business and began printing banknotes and gained contracts with the Polish national government and the government of France. After World War II, the firm shifted to printing advertisements and cardboard packaging. B. Arnaud merged with three other printing firms in 1984: Sauterot-Drac, Néofut, and Noury. This partnership created the Compagnie Rhodanienne d'Impression et de Cartonnage (C.R.I.C.). The firm closed its doors in 1996. Learn More...

Very good. Closed minor edge tears, not effecting image, professionally repaired on verso.
Looking for a high-resolution scan of this?