1940 Denoyer-Geppert Wall Map of Demographics and Immigration in the U.S. 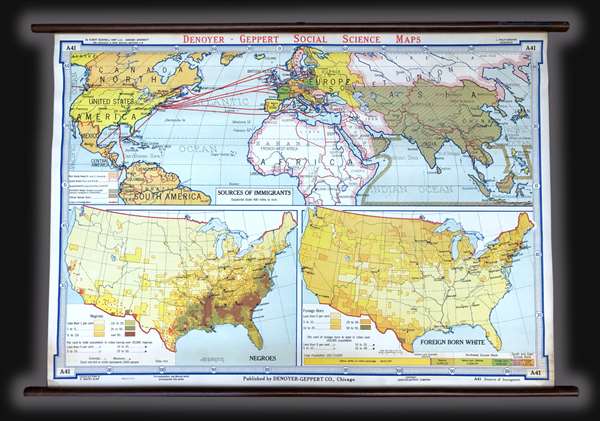 1940 Denoyer-Geppert Wall Map of Demographics and Immigration in the U.S.

Allows for a glimpse into the racist tendencies of the United States in the 1920s and 1930s.

This is a c. 1940s Albert Bushnell Hart and Denoyer-Geppert Company wall map of the world. The map depicts from North America to the Pacific Ocean, Japan, and Indonesia (labeled the Netherlands, Indies) and from the Arctic Circle to just past the Equator. Occupying the top half of the wall map, the world map illustrates the quota status of the nations of the world. The quota system was established by the Emergency Quota Act of 1921 and made even more restrictive by the Immigration Act of 1924. This Act stated that only 2% of the number of people from a given country who were in the United States as of the 1890 census could immigrate to the United States. It also effectively banned immigration from Japan, and immigration from China had already been ended by law in 1882.There were two non-quota areas, which were North and South America. Numerous countries and several cities are labeled the world over.

Two inset maps make up the bottom half of this wall map. The first, on the left, depicts the percentage of African-Americans in any given region, from less than 1% to over 50%. Populations percentages are also depicted for certain cities across the country. A decidedly offensive term is used for the title of this inset map. The other inset map, on the left, illustrates the percentage of foreign born whites throughout the country, from less than 1% to 50-55%. A bar graphic is included along the bottom border of this inset map, illustrating what percentage each demographic represents in the total population of the United States. Again, decidedly offensive terms are employed as labels here.

This map was created by Albert Bushnell Hart with L. Philip Denoyer serving as geographer. The map was compiled and drawn by R. Baxter Blair and published by the Denoyer-Geppert Company of Chicago. It is number A41 in the Denoyer-Geppert Social Science map series. We have dated this map as c. 1940s due to the paper it is printed on. Several different editions of this map were printed, which allows for the possibility that this particular example could date from an earlier or later year.

Very good. Backed on linen. Attached to original rollers. Measurment is for the map itself. Since the map is attached to rods, they add an another 2 inches in height and 3.5 inches in width.
Looking for a high-resolution scan of this?