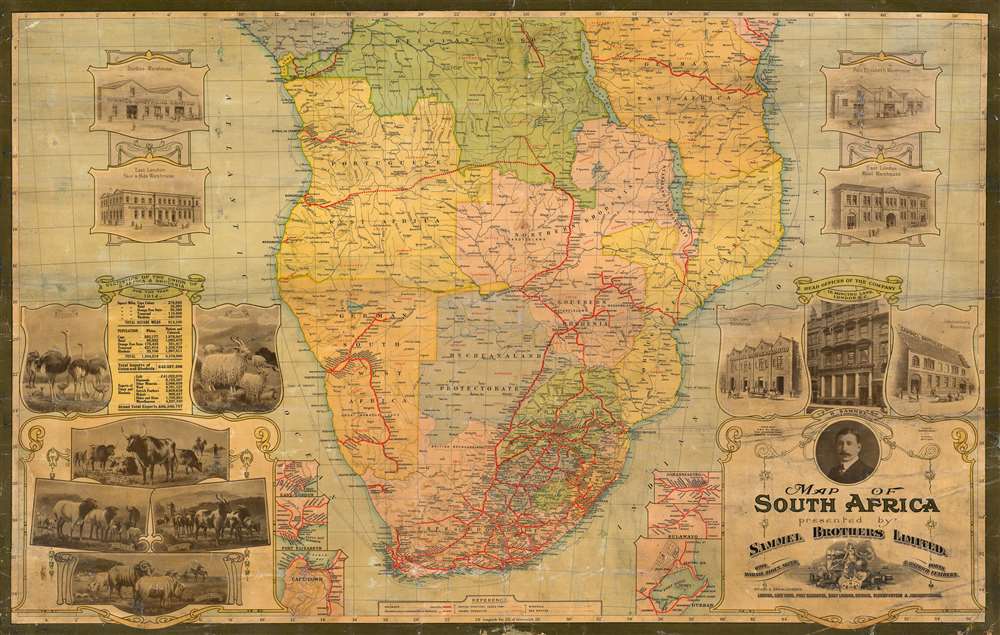 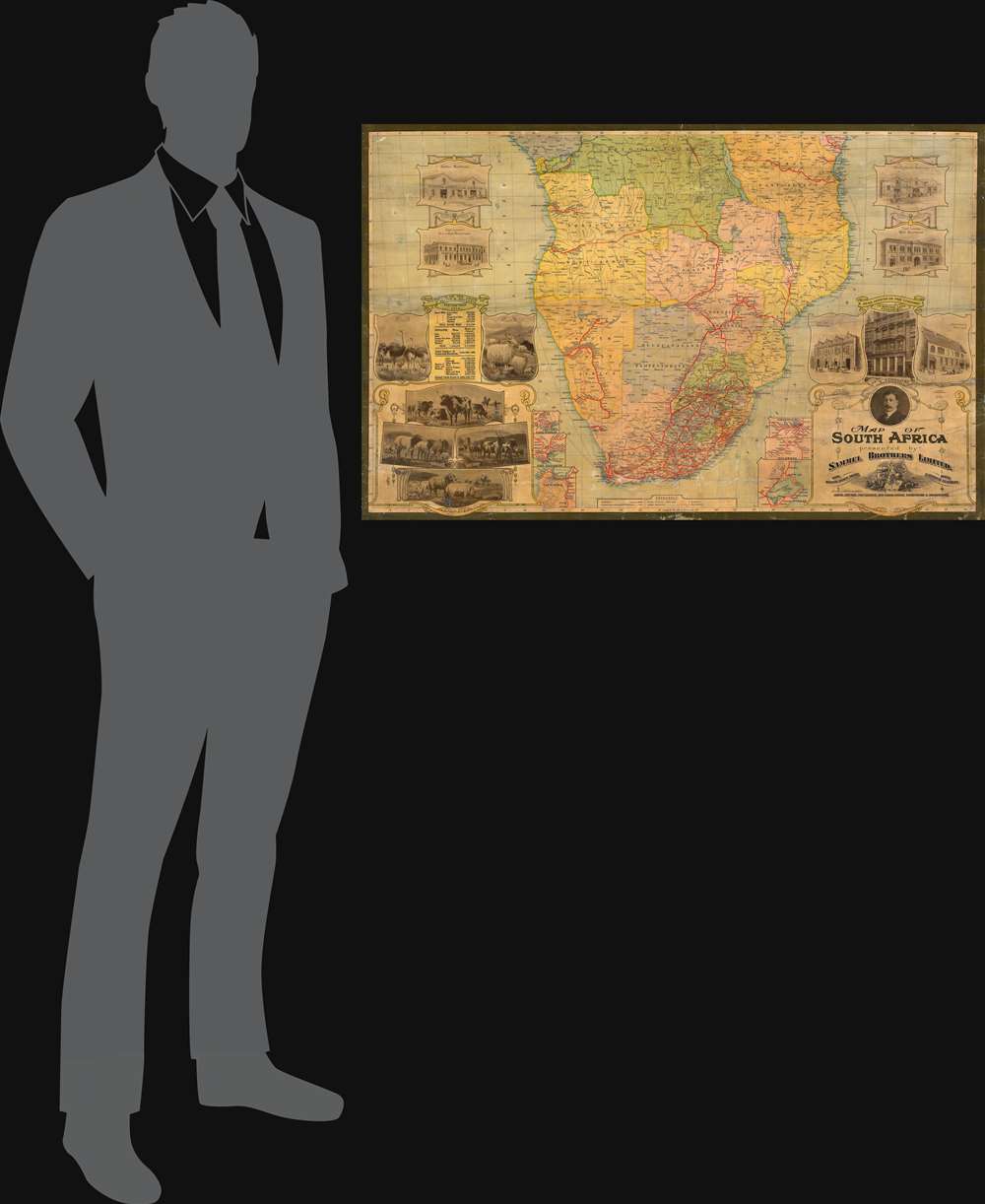 Here in its only known example, this is Waterlow and Sons striking 1913 map of Southern Africa, focusing on South Africa and Rhodesia but also including Portuguese East and West Africa, German East and West Africa, and the Belgian Congo. The map was printed to promote Sammel Brothers Limited, a London importer of South African wool, mohair, skins, hides and ostrich feathers. The map includes inset views of the firm's six South African warehouses, and the fashionably-appointed London head office at 16 Mincing Lane. A table to the left (bordered with depictions of the avian and bovine sources of their products) presents the prospects for the company, giving the size in square miles of the parts of South Africa and Rhodesia, as well as the population (Whites versus 'Natives and Coloured') and the total imports and exports (in British pounds) of the colonies. The exports are broken down between gold, diamonds, 'other minerals,' wool, ostrich feathers, mohair, and hides and skins. The numbers reflected the reality that after gold, diamonds and mineral extraction, the export of cattle skins and wool was the most important source of wealth in South Africa, and until the dual advent of the automobile and wartime austerity, ostrich feathers were a much sought-after embellishment for the finest hats.

Topography is illustrated with hachure, and interior waterways are defined with high accuracy - likely a benefit of Waterlow and Sons' frequent work for the Royal Geographic Society. In addition to the political divisions, the map details the main lines of trade and communication linking the colonies and England. Coastal sea routes are shown from the mouth of the Congo River to Cape Town, and likewise from Mombasa along the east coast. Each leg is marked with distances. From Cape Town, a further sea track is marked 'Southampton Cape Town 5978 Miles,' indicating the final destination of the company's goods. Inland, the focus is on railways linking the coast with cattle regions on the interior. These are shown with depots marked along their lengths, and include proposed routes (for example, the route from Carnarvon to the sheep country of Calvinia, which would not be completed until 1917). Mineral resources - diamonds gold, copper, coal and so forth - are marked in faint grey, but the resources in which Sammel Brothers traded - goats, cattle, sheep, horses, ostriches and elephants - are shown in eye-catching red.

Six inset maps focus on the vicinity of key cities and their rail connections. These include East London, Port Elizabeth, Cape Town, Johannesburg, Bulawayo, and Durban.

The map sports an elegant cartouche in the old style. A classical (but undoubtedly British) woman stands centrally, one hand on the globe and another on an anchor, with her foot on the 'S.B.L.' company logo. An image of a steam locomotive pulling a train appears behind her. In the background is a distant ocean horizon, with both sailing ships and steamers at sea. Strewn about our heroine's feet are barrels and crates, cattle skins, bull's horns, and the gauzy plumes of ostrich feathers. Thus, the cartouche celebrates the company, its products, and the means by which those products will be delivered.

While foregrounding the business affairs of Sammel Brothers Limited, the map is simultaneously a snapshot of the 'Scramble for Africa,' the series of late 19th and early 20th century occupations, usurpations, annexations, divisions, and land seizures by European powers in Africa, here specifically Britain, Belgium, Portugal, and Germany. Beginning around 1881 and continuing until 1914, the Scramble for Africa was part of the era of New Imperialism, marked by heightened occupation and direct ownership of colonial lands rather than the more traditional 'treaty based' colonization. The Scramble led to a number of new African states, many of which remain today, but few of which paid heed to traditional rivalries or cultural distinctions. The scramble culminated in the Berlin Conference of 1884, wherein European colonization of Africa was regulated and made official and the doctrine of Effective Occupation was introduced.

This map was printed in London by Waterlow and Company and is extremely rare. This is the only example of this piece we have identified on the market, or in catalogue or auction records. There are no examples cataloged in institutional collections.

Good condition. Backed on linen. Few surface mends with minor loss.
Looking for a high-resolution scan of this?