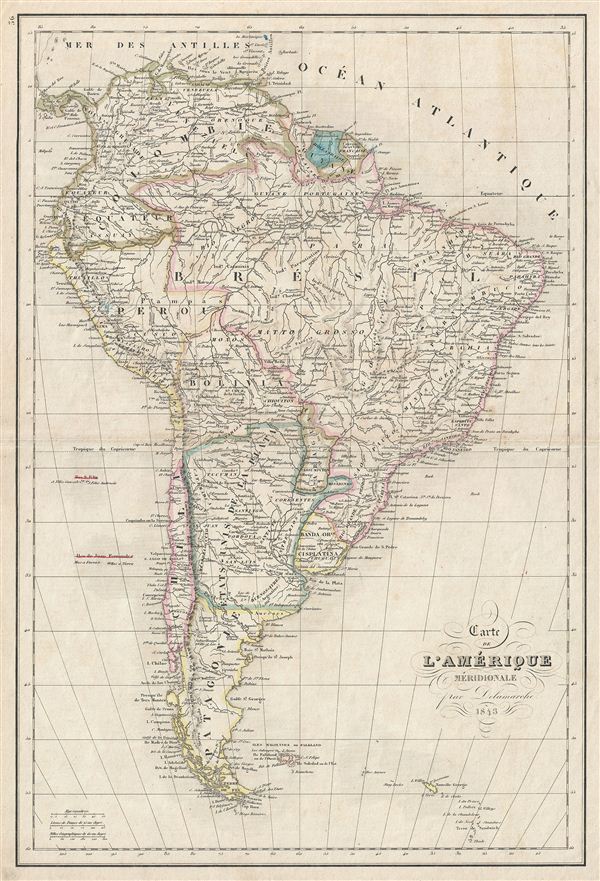 This is a beautiful example of Alexandre Delamarche's 1843 map of South America. It covers the entire continent from the Caribbean to Tierra del Fuego and from the Pacific to the Atlantic, including the Falkland Islands. It includes the modern day nations of Colombia, Guiana, Brazil, Peru, Bolivia, Paraguay, La Plata, Chile, Patagonia and the Falkland Islands. Much of South America was, at this time, embroiled in or about to become embroiled in, severe civil strife. The new nations, freed from Spanish dominance though various wars of liberation in the previous decades, were struggling with their newfound independence in an attempt create stable and prosperous governments. Most would dissolve into civil war between 1858 and 1864.

Throughout, the map identifies various cities, towns, rivers, mountain passes and an assortment of additional topographical details. Political and regional borders are highlighted in outline color. This map was issued by Alexandre Delamarche as plate no. 36 in his Atlas Delamarche Geographie modern.

Charles Francois Delamarche (1740-1817) founded the important and prolific Paris based Maison Delamarche map publishing firm in the late 18th century. A lawyer by trade Delamarche entered the map business with the acquisition from Jean-Baptiste Fortin of Robert de Vaugondy's map plates and copyrights. Delamarche appears to have been of dubious moral character. In 1795 the widow of Didier Robert de Vaugondy Marie Louise Rosalie Dangy, petitioned a public committee for 1500 livres, which should have been awarded to her deceased husband. However, Delamarche, proclaiming himself Vaugondy's heir, filed a simultaneous petition and walked away with the funds most of which he was instructed to distribute to Vaugondy's widow and children. Just a few months later, however, Delamarche proclaimed Marie Dangy deceased and it is highly unlikely that any these funds found their way to Vaugondy's impoverished daughters. Nonetheless, where Vaugondy could not make ends meet as a geographer, Delamarche prospered as a map publisher, acquiring most of the work of earlier generation cartographers Lattre, Bonne, Desnos, and Janvier, thus expanding significantly upon the Vaugondy stock. Charles Delamarche eventually passed control of the firm to his son Felix Delamarche (18th C. - 1st half 19th C.) and geographer Charles Dien (1809-1870). It was later passed on to Alexandre Delamarche, who revised and reissued several Delamarche publications in the mid-19th century. The firm continued to publish maps and globes until the middle part of the 19th century.