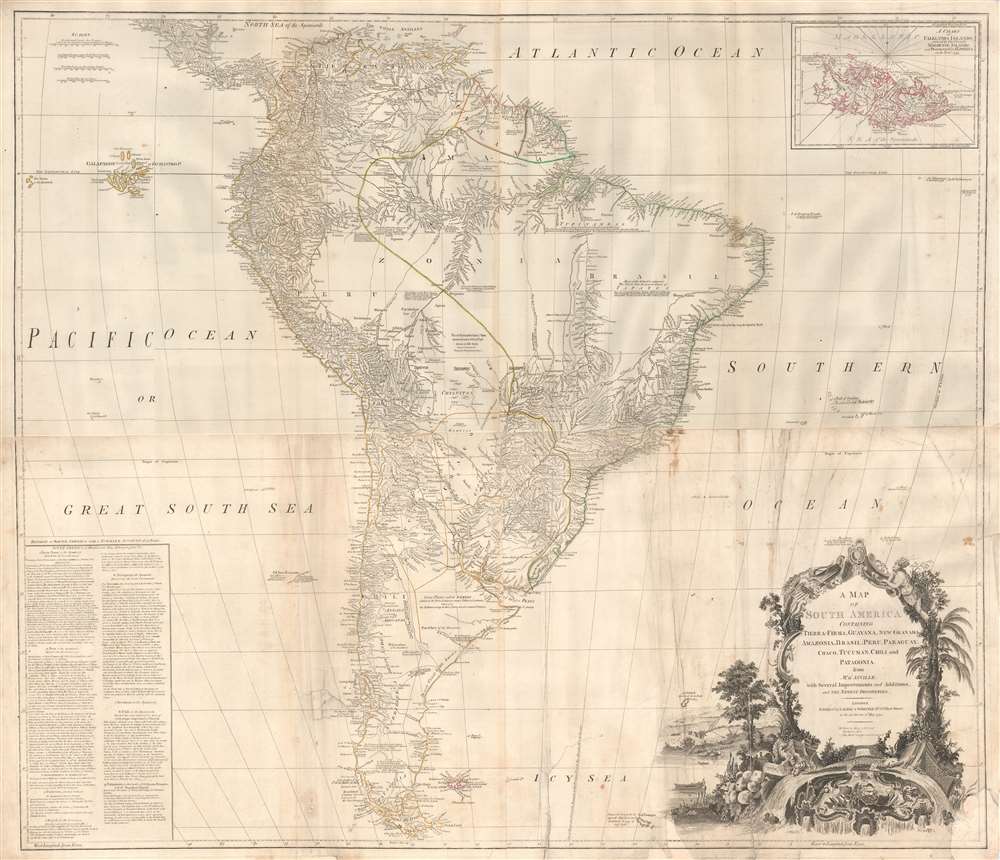 This is probably the most important large format wall map of South America produced in the 18th century. Largely based upon the earlier D'Anville map, this map has been enlarged and expanded by the english publishing house of Laurie and Whittle. Depicts the continent in full with an inset of the Falkland Islands. This map is unique in that it is a serious attempt to compile all of the accurate scientific knowledge of the South American continent available at the time. Offers a smorgasbord of factual, speculative, and historical detail.

This extraordinary and highly decorative map bears up to almost endless perusal and volumes could be composed upon its content. The cartographer attempts to depict both known and unknown parts of the continent with actual data reported by both contemporary and historic travelers. In most cases it is extremely difficult to identify specific sources as much of the data is vague and uncertain.

Our survey of this map begins with the coast which Spanish and Portuguese navigators had mapped with considerable accuracy as early as the late 16th century. This, like most early maps of the area, contrasts a detailed mapping of the coast with a speculative discussion of the interior, particularly Patagonia and the Amazon Basin. Offers a fairly accurate discussion of both the east and west coasts with exceptional detail in the populated Andean regions of Venezuela, Columbia, Ecuador (Labeled Quito), and Peru. Notes Cuzco, Lima, Quito, Valladolid, Arequipa, Trujillo and other important trading centers of the region. In Portuguese controlled Brazil, Rio de Janeiro, San Salvador and San Sebastian are noted.

It is in the interior that this map becomes exceptionally fascinating. In the northern part of the continent D'Anville maps a number of confusions associated with the English adventurer Sir Walter Raleigh's search for el Dorado. Believing el Dorado to lie in the northern part of the Amazon, Raleigh sailed down the Orinoco River just before the onset of the rainy season. Reaching a remote tribal village, Raleigh noted canoes arriving bearing gold, silver, and other treasures. Asked where the gold came from, the natives replied, 'Manoa,' the term for the tribe to which the river traders belonged. Manoa, the natives claimed could be reached following a long river voyage southward to a Great Lake, called Parima. Raleigh and his associates immediately associated Manoa and Lake Parima with the golden kingdom of el Dorado, though they never visited the city or lake. Subsequent maps, including this one, mapped el Dorado and Lake Parima in this location for several hundred years. Both Raleigh and the natives were describing an actual event known to occur annually in the region. Rains would annually swell the Amazon and Orinoco river systems creating a linkage in the Parima flood plain, which, during heavy rains, can resemble a massive lake. The Manoa were a large and populous trading nation active in pre-colonial days whose vast empire, based in the Amazon Basin, extended form the Andes to the Orinoco. Curiously, in addition to noting the city of Manoa on Lake Parima, D'Anville also correctly maps the center of the ancient Manoan civilization between the Amazon tributaries Rio Negro and Rio Yapura. Sadly the Manoa and many of the other populous South American indigenous nations noted by the earliest explores to the region vanished, brought low by european epidemics.

A similar error appears far to the south where the Paraguay rivers empties into the Laguna de Xarayes. The Xarayes, a corruption of 'Xaraies' meaning 'Masters of the River,' were an indigenous people occupying what are today parts of Brazil's Matte Grosso and the Pantanal. When Spanish and Portuguese explorers first navigated up the Paraguay River, as always in search of el Dorado, they encountered the vast Pantanal flood plain at the height of its annual inundation. Understandably misinterpreting the flood plain as a gigantic inland sea, they named it after the local inhabitants, the Xaraies. The Laguna de los Xarayes almost immediately began to appear on early maps of the region and, at the same time, almost immediately took on a legendary aspect. Later missionaries and chroniclers, particularly Díaz de Guzman, imagined an island in this lake and curiously identified it as an 'Island of Paradise,'

To the north of the 'Island of Paradise' appeared the 'Puerto de los Reyes' which was considered to be a gateway to the Amazon and the Kingdom of el Dorado. D'Anville, to his credit, shows the 'Laguna' and its island in a much reduced form compared to earlier cartographers and also comments that its existence is 'dubious.'

Far to the south Patagonia is crisscrossed with a number of speculative rivers based upon assumptions from earlier cartographers. D'Anville notes several questionable river passes that suggest a possible navigable communication between the east and west coasts of the continent. Speculation on such a pass fueled the famous South Sea Company, one of the modern world's first stock bubbles, but when no such pass was discovered, the bubble burst.

D'Anville also notes several offshore discoveries including the Galapagos, which he calls the Inchanted Islands, the Isle of Georgia, the Juan Fernandez islands, the Falkands, and some curious land masses just west of the Galapagos labeled 'Isles known to the Spanish.' Curiously, he also notes 'a Bank of Sounding Discovered by Capt. Hook in 1767.' We know of no navigator by the name of Captain Hook except Peter Pan's fictional nemesis. Most likely this is a misprinted reference to Captain Cook, who was active in the Atlantic at this time. One can only wonder if J.M. Barrie had this map handy when imagining his fictional villain.

Prepared from work by D'Anville and published by Laurie & Whittle in Kitchin's 1794 General Atlas.

Kitchin, Thomas, Kitchin's General Atlas, describing the Whole Universe: being a complete collection of the most approved maps extant; corrected with the greatest care, and augmented from the last edition of D'Anville and Robert with many improvements by other eminent geographers, engraved on Sixty-Two plates, comprising Thirty Seven maps., (Laurie & Whittle, London) 1797.