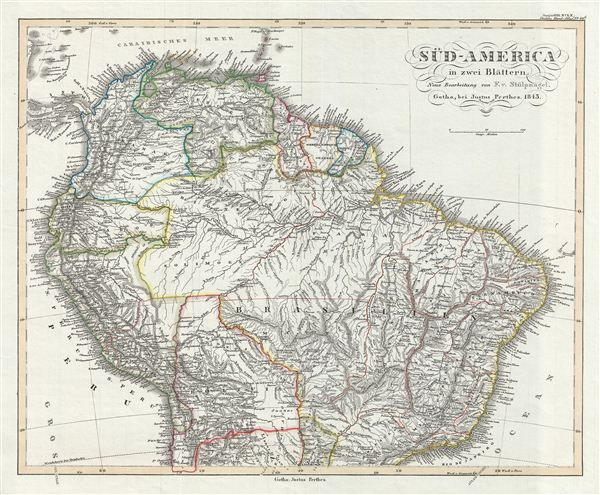 This is a fascinating example of the 1850 Justus Perthes map of the northern part of South America. It covers the northern part of the continent including Panama, New Granada, Venezuela, ecuador, Peru, Brazil, Bolivia, Chile and Guyana. Shows Bolivia's claims to the Atacama Desert and a narrow strip of land along the Pacific coast – valuable territory that was subsequently lost to Chile and Peru. Perthes' map is highly detailed with both political and physical data. Various cities, mountains, roads, rivers and an assortment of additional topographical details are noted.

Political and regional borders are highlighted in outline color. Unlike other cartographic publishers of the period, the Justus Perthes firm did not transition to lithographic printing techniques. Instead, all of their maps are copper plate engravings and hence offer a level of character and depth of detail that was impossible to find in lithography or wax-process engraving. All text is in German. Issued as plate no. 49b in the 1854 edition of Stieler's Hand-Atlas.