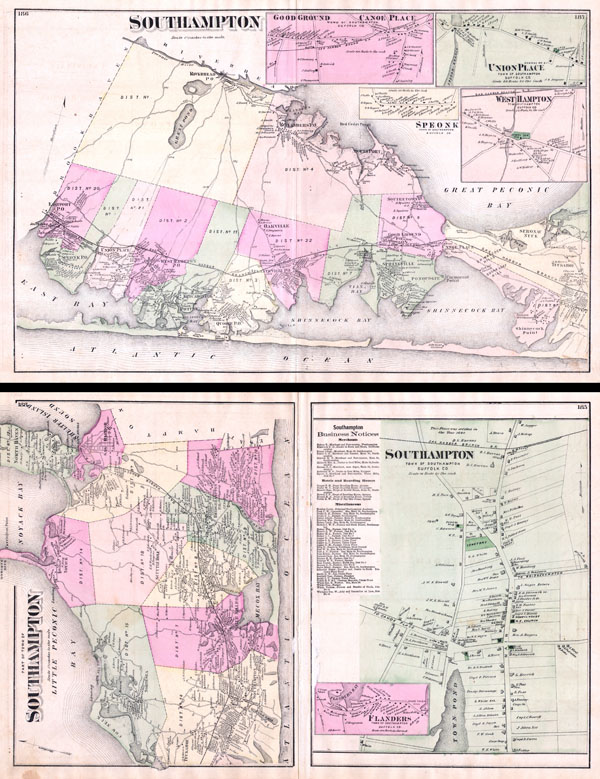 A scarce set of Fredrick W. Beers' Map three map set of Southampton, Long Island, New York. Published in 1873, this magnificent map covers from Eastport eastward to through West Hampton to Bridgehampton and Sag Harbor. Includes the resort communities of Southampton, Water Mill, Bridgehampton, Northsea, Sag Harbor, Noyack, West Hampton, Quogue, Springville, Tuckahoe, Ponquogue, and Potunk, among others. Maps are printed back to back with the western part of Southampton, from Eastport to Tuckahoe on one side and the eastern part, form Tuckahoe to Bridgehampton as well as a detail of the town of Southampton, on the other. Inset maps detail Good Ground, Canoe Place, Speonk, Union Place and West Hampton. Beers maps are highly desirable for their superb detail down to the level of individual buildings and household family names. This is probably the finest atlas map of Southampton to appear in the 19th century. Prepared by Beers, Comstock & Cline out of their office at 36 Vesey Street, New York City, for inclusion in the first published atlas of Long Island, the 1873 issue of Atlas of Long Island, New York.

Very good condition. Minor age toning. Maps are printed back to back.