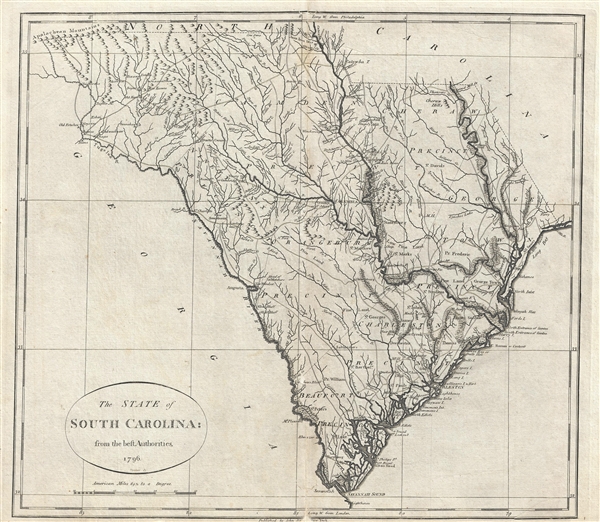 The second map of South Carolina to appear in an American commercial atlas.

A fine example of John Reid's scarce and important 1796 map of South Carolina. This is the second folio map of South Carolina appear in an American commercial atlas. The map covers roughly the territory of modern day South Carolina, running along the Atlantic coast from Long Bay to the Savannah Sound, and then inland with the Savannah and Tugeloo River's forming the southern boundary of the state. The northern boundary runs just north of the 35th parallel, as today, before angling southward at the Catawba River and angling east again between the 34th and 35th parallels, finally meeting the coast just west of the Cape Fear River. The northwest boundary with Georgia is further complicated as the north branch of the Tugaloo River, the Chattooga, is confused with the Tallulah River. This forces the border of the state far to the west. In addition, there is an error in scale contributing to the state appearing about 15% larger than actuality.

This map was engraved by Benjamin Tanner. It was issued to accompany Reid's importantAn American Atlas. This atlas was intended to supplement the American edition of Winterbotham's Historical, Geographical, Commercial and Philosophical View of the United States. Although Reid's atlas is derived from the work of of London cartographer John Russell, who prepared the maps for Winterbotham's, this and 14 other maps from the atlas focusing on American states and regions, are new engravings that first appeared in this atlas. Cartographically the map is clearly derived from the John Carey / Samuel Lewis map of 1795 but a close examination reveals it to be an entirely different, although visually similar, plate.