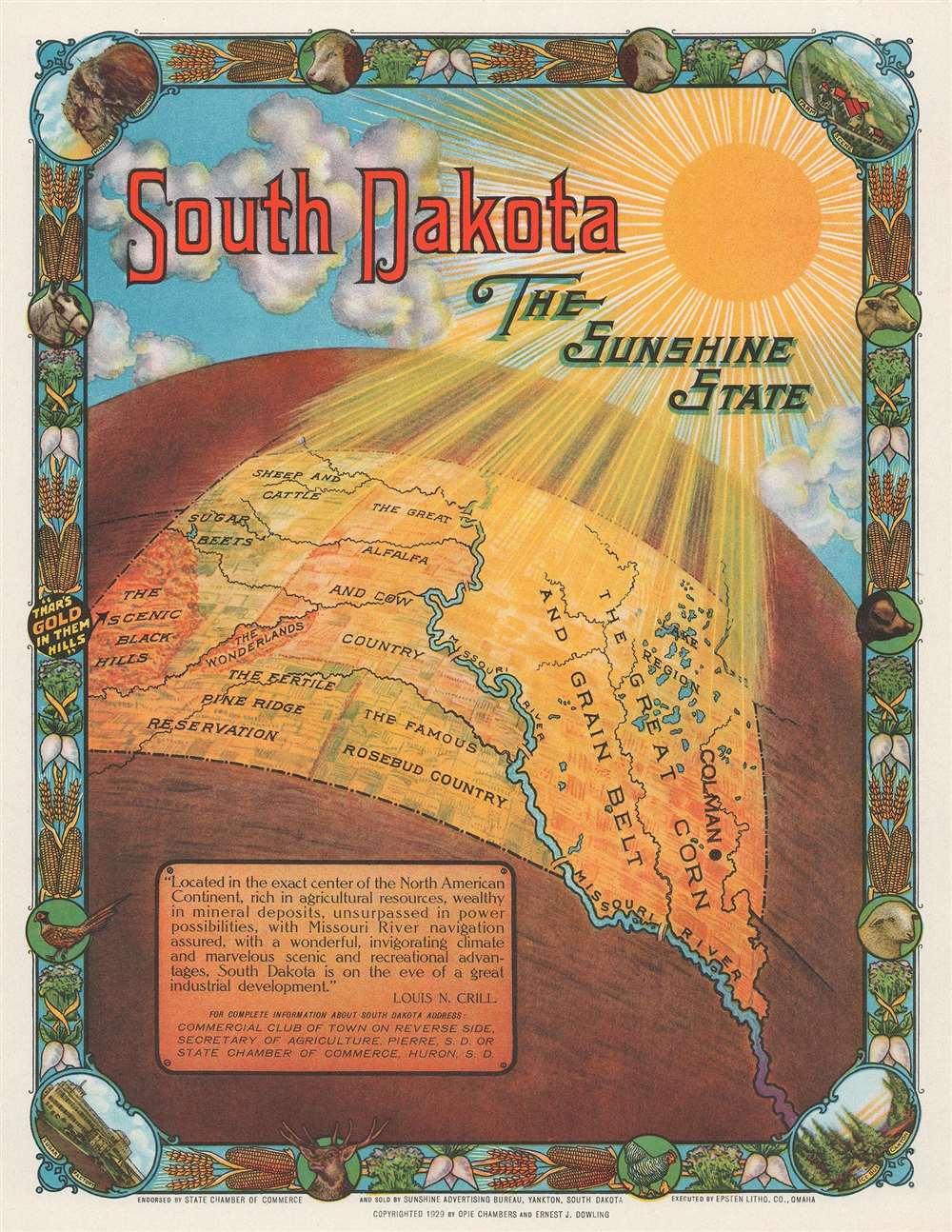 This is a 1929 Opie Chambers and Ernest J. Dowling pictorial map of South Dakota - 'The Sunshine State'. Created as promotional material extolling South Dakota's many advantages geared toward 'industrial improvement', the map illustrates South Dakota from above in a pseudo bird's-eye-view style. The entire state is depicted, and it is divided into different industrial regions using shading. Bold capital type extolls the different parts of the state: the 'lake region', 'The Great Corn and Grain Belt', 'The Great Alfalfa and Cow Country', 'The Fertile Pine Ridge Reservation', 'The Wonderlands', and 'The Scenic Black Hills'. 'Sheep and Cattle' and 'Sugar Beets' are noteworthy in northwestern South Dakota. The Missouri River, illustrated in a brilliant blue, crosses the state diagonally. A laudatory quotation is included in the lower left quadrant, proclaiming everything South Dakota has to offer. The whole is surrounded by a pictorial border made up of illustrations of South Dakota agriculture, livestock, and wildlife. Larger vignettes occupy the four corners and highlight Mount Rushmore, a farm scene, Ice Box Canyon, and a sugar factory.

This map was created by Opie Chambers and Ernest J. Dowling in 1929. It was printed by the Epsten Lithography Company of Omaha, and sold by Sunshine Advertising Bureau of Yankton, South Dakota.

Opie Chambers (c. 1890 - c. 1939) was an American active in South Dakota politics and business in the early 20th century. Said to have come from Florida to South Dakota, Chambers founded the South Dakota Development association in an effort to help promote South Dakota throughout the country. Said to have been 'one of the state's most ardent and effective boosters', Chambers served as secretary of the Development association and was also affiliated with the Sunshine State magazine. Chambers moved to Arizona in 1921 after being told that relocating there would improve his daughter's health. He was back in South Dakota by 1927, where he became Executive Secretary of the Yankton Chamber of Commerce, a position he held from April of that year to January 1, 1930. Chambers and Ernest J. Dowling were involved in an automobile accident in On January 4, 1930. Neither man was seriously injured. Dowling also succeeded Chambers as Secretary of the Yankton Chamber of Commerce.


Ernest J. Dowling (January 18, 1880 - December 6, 1962) was an English businessman, investor, and advertiser Dowling and his family immigrated to South Dakota sometime before 1900. Dowling became Secretary of the Yankton (South Dakota) Chamber of Commerce in January 1930. Dowling married Helen French in 1913 with whom he had one son. Helen died in September 1962.

Very good. Even overall toning. Text on verso.
Looking for a high-resolution scan of this?