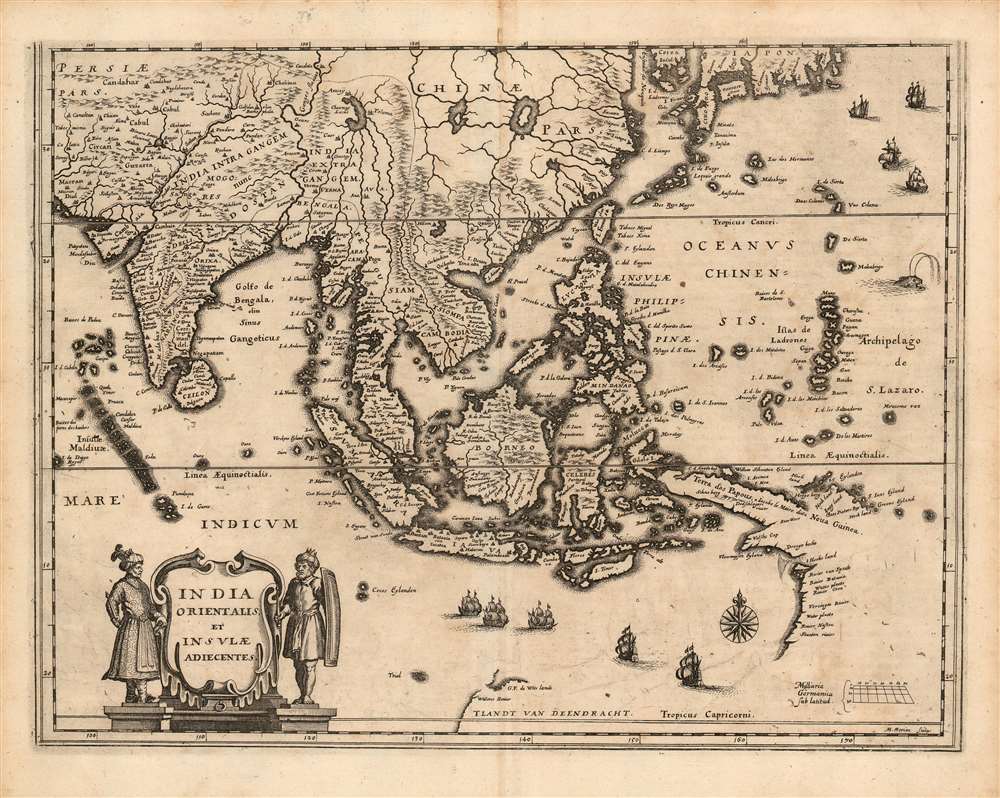 A scarce and elegant map showing the route to the Spice Islands and an early glimpse of Australia.
$1,000.00

This is a scarce 1638 Matthais Merian map of India, Southeast Asia, China, and Japan, including some of the earliest mapped portions of Australia. The map is beautifully engraved, decorated with nine sailing ships, a sea monster, and an elegant compass rose; the title cartouche is flanked by soldiers in Mogul garb. The mapping of India appears to be largely consistent with that of Linschoten. The Philippines are shown in sharp detail, albeit exaggerated in size. New Guinea is shown according to Le Maire's charting.

This map is among the earliest to depict any parts of Australia based on documented discovery - in particular, G. F. de Wits Land marks the site where the Dutch vessel Vianen in 1628 under her captain, Gerrit Frederikszoon de Witt, would run aground on the northwest coast of Australia. De Witt went on to chart the northwest coast about as far as the present-day location of Port Hedland. The map also shows the lands charted in 1605 - 1606 on the western coast of Queensland by Willem Janszoon (no relation to Jansson or Willem Janszoon Blaeu).

The map is a scrupulously precise reduced version of Blaeu's 1634 India quae Orientalis dicitur et Insulae Adiacentes. Hondius also produced a nearly identical version of the map in 1638. The differences between them are largely cosmetic - the Jansson lacks longitude lines, and the two maps' title and dedicatory cartouches are quite different. The cartographic detail of the two maps differs in a handful of areas: on the Japanese island of Shikoku, named Tokoesy on both maps, Hondius' copy lacks the symbol for the city 'Tonsa;' in the small portion of western Australia that appears, Blaeu includes the place name 'Willems Revier' where it is lacking on Hondius' copy. Merian's depiction of these areas corresponds to Blaeu's; this, and his imitation of Blaeu's title cartouche art suggests that Merian drew on the Blaeu as his source, and not the later Hondius map.

What were Blaeu's sources for this map?

The coast of China appears to correspond with Luis Jorge de Barbuda's place names found on Ortelius' 1584 map. (The interior lakes of China shown here are drawn from Blaeu's specific map of China: this area was obscured by the title cartouche on Blaeu's map of Southeast Asia.) The southern Korean coast and the whole southern coast of Japan appears to have been drawn from a 1621 manuscript chart by Hessel Gerritz, produced while he was the first exclusive cartographer of the Dutch East India Company. The Blaeu family's long connection with this accomplished chart maker bore fruit for many years. Interestingly, Gerritz's chart made no reference to the insularity of Korea - though Blaeu named 'Corea Insul' on his map to make it consistent with his other maps of the region, and Merian copied this. Another key contribution of Gerrtitz was from his 1627 Caert van't Landt van d'Eendracht. This appears at the bottom center of the map: a portion of the coast of Western Australia, along with the place name, 'Willems Revier.' Gerritz reported that this river had been visited by the crew of the Dutch ship Mauritius in July 1618. (The identity of this river is unknown; it may be the Ashburton River.) Further to the west, also drawn from the same source, are a small group of islands marked 'Trial.' These represent one of the earliest appearances on a map of the Tryal Rocks, so named becaus3 of the June 1622 shipwreck of the English ship, Trial.

A Proliferation of 'Thieves'

Several locations on the map bear variations on the place name 'Ladrones.' In the southeast corner of the map are the Insulae Ladrones, which are now understood as the Mariana Islands; a further I. de Ladrones appears on the southern coast of Korea, corresponding roughly with Jeju Island. In both cases, the name is derived from the Spanish and Portuguese word for 'Thieves.' The appellation of 'Ladrones' in the Marianas dates back to report of Magellan's reception in Guam by the Chamorros, who boarded the ship and stole whatever could be taken. As for Korea, the archipelago inclusive of Jeju and Tsushima gained a reputation for piracy - at the least, the passive piracy of stripping wrecks. The name appears on maps of Korea going back to the 1595 Ortelius and the 1596 Linschoten, so it is unsurprising to see it surviving here.

The mythical Lake of Chiamay appears at the western extreme of the map, roughly in what is today Assam, India. Early cartographers postulated that such a lake must exist to source the four important Southeast Asian river systems: the Irrawaddy, the Dharla, the Chao Phraya, and the Brahmaputra. This lake began to appear in maps of Asia as early as the 16th century and persisted well into the mid-18th century. Its origins are unknown but may originate in a lost 16th-century geography prepared by the Portuguese scholar Jao de Barros. It was also heavily discussed in the journals of Sven Hedin, who believed it to be associated with Indian legend that a sacred lake, Mansarovar, linked several of the holy subcontinent river systems. There are even records that the King of Siam led an invasion force to take control of the lake in the 16th century. Nonetheless, the theory of Lake Chiamay was ultimately disproved, and it disappeared from maps entirely by the 1760s.

This map was executed in 1638 for inclusion in Matthias Merian's Neuwe Archontologia cosmica, a German translation of Pierre d'Avity's 1616 Les Estats, empires, et principautez du monde. We identify about ten examples of later editions of Merian's Neuwe Archontologia cosmica in institutional collections, and sixteen examples of this separate map are also catalogued, in various editions.