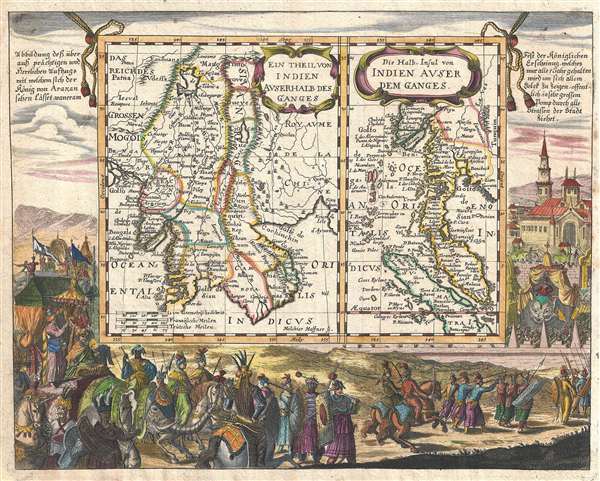 A fine example of Johann Christoph Wagner's highly decorative 1687 two-part map of Southeast Asia. Essentially two maps on a single sheet, the left hand map focuses on Indochina from the mythical lake of Chiamay to the Gulf of Siam and from the Indian Ocean to the Chinese island of Hainan (Aynan). It includes the modern day Kingdom of Thailand, Cambodia, Laos, Vietnam (Tonquin) and Burma. The right hand map continues the scope of this chart southwards along the Malay Peninsula as far as the Straits of Singapore, Covering the modern day country of Malaysia and Singapore, as well as adjacent parts of Burma, Thailand, and Indonesia. The map names Ayutthaya (Aiothia), Bangkok (Bangkock), Cambodia (Camboia), the Khmer (Kemois), Malacca, Ihor (Jahor), and Singapore (Sincapura).

By far this map's most striking feature is its elaborate South German Baroque surround illustrating scenes from the lavish court of the Arakan Kingdom. Today Arakan is an abandoned if spectacular ruin (Mrauk-U) in a remote part of Burma. In the 17th century it was one of the largest and most beautiful cities in the world.

Due to its proximity to the Bay of Bengal, Arakan or Mrauk-U developed into an important regional trade hub, acting as both a back door to the Burmese hinterland and also as an important port along the eastern shore of the Bay of Bengal. It became a transit point for goods such as rice, ivory, elephants, tree sap and deer hide from Ava in Myanmar, and of cotton, slaves, horses, cowrie, spices and textiles from Bengal, India, Persia and Arabia. The city also traded with non-Asian powers such as Portugal and then the Dutch East India Company of the Netherlands. The Dutch East India Company (VOC) established trading relations with the Arakanese in 1608 after the Portuguese fell from. The VOC established a permanent factory in Mrauk-U in 1635, and operated in Arakan until 1665. At its zenith, Mrauk-U was the center of a kingdom which stretched from the shores of the Ganges river to the western reaches of the Irrawaddy River. Most of what is known today of Arakan is drawn from the journals of Friar Sebastian Manrique, a Portuguese Augustinian monk who resided there from 1630 to 1635.

The apocryphal Lake of Chiamay is the northern most extent of the left hand map. It is depicted as the source of four important Southeast Asian river systems including the Irrawaddy, the Dharla, the Chao Phraya, and the Brahmaputra. The curious Lake of Chiamay (also called Chiam-may or Chian-may), roughly located in the area of Assam but sometimes as far north as Tibet and China, began to appear in maps of this region as early as the 16th century and persisted well into the mid 18th century. Its origins are unknown but may originate in a lost 16th century geography prepared by the Portuguese scholar Jao de Barros. It was speculated to be the source of five important Southeast Asian River systems and was mentioned in the journals of Sven Hedin. There are even records that the King of Siam led an invasionary force to take control of the lake in the 16th century, although this most likely referrers to a conflict between Ayutthaya and Chaing Mai. Nonetheless, the theory of Lake Chiamay was ultimately disproved and it disappeared from maps entirely by the 1760s.

Johann Christoph Wagner (1640 – c. 1701) was a German theologian, mathematician, and writer active in the 17th century. Wagner was born in Nuremberg where his father, Christoph Wagner, was a cantor at St. Egidien. Wagner studied in Altdorf where he defended works on astrological medicine and the occult properties of abbreviations. Unable to find work in Nuremberg he took to published calendars for astrological work. Around 1680 he relocated to Augsburg where he published, among other things, his well-known descriptions of the orient. Learn More...


Melchior Haffner II (1660- November 1, 1704) was a prominent German engraver active un Augsburg during the second half of the 17th century. Haffner was born in Ulm and apprenticed as an engraver under his father of the same name. He married in Ulm around 1683. Shortly after he relocated to Augsburg where is began his own successful engraving business. He appears to have worked mostly for book publishers producing portraits, frontispieces, and bookplates, as well as a few maps. Several important maps are included in his corpus including maps of China issued for Ferdinand Verbiest (1623-1688) and the maps and other engravings included in Jean-Baptiste Tavernier's Les Six Voyages. Haffner II is not to be confused with this father, Melchior Haffner I, of Ulm, who was also an engraver. Learn More...