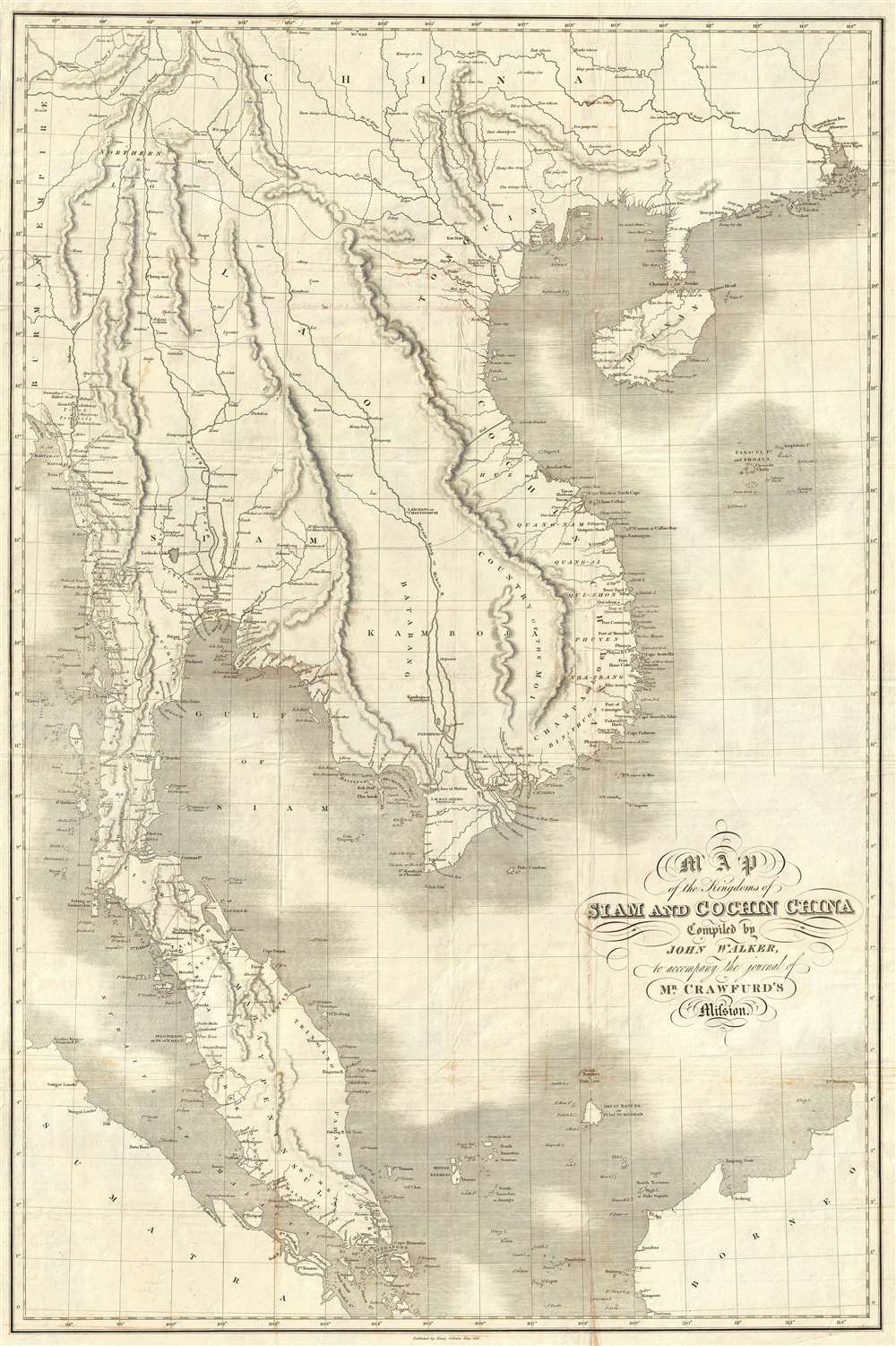 The first accurate map of Siam (Thailand) from the secret maps of a Siamese-'Mohammedan' mariner!

This rare large-format 1828 map of Southeast Asia, compiled by John Walker to illustrate John Crawfurd’s mission to Siam (Thailand) is the first accurate survey of the coasts of Siam. Coverage extends from China to Singapore and from the Gulf of Martaban (Burma) to Vietnam and Hainan. Siam at the time was inaccessible to European merchants and even diplomats with its coasts and interior were largely unknown. This map is an amalgam of European sources, but with regard to Siam, derived primarily from secretly acquired early 19th century Siamese surveys previously unknown to Europeans and, for all intent and purposes, still lost.

Following the resurgence of the Kingdom of Siam after the Burmese–Siamese War of 1765 -1767, Siam emerged as a major political power and the central state in Southeast Asia. The regional destabilization of the Siamese victory led to a power vacuum in Burma that precipitated a series of further conflicts, both between Siam and Burma, and between Burma and Great Britain, lasting well into the early 19th century. The British took advantage of the weak Burmese military to seize additional territory in Assam, Manipur, and Arakan, during the First Anglo-Burmese War (1824–1826). At the same time Siam continued to grind away at both Burmese territory to the west, and annexed parts of Laos and Cambodia to the east, stopped only by a Vietnamese and French forces in Indochina. To the south, Britain exerted strong influence over the Malay States, leaving only Siam as a fully independent and powerful Southeast Asian state resistant to European influence.

The Scottish linguist, diplomat, doctor, and colonial administrator John Crawfurd (1783 - 1868) was sent to the Kingdom of Siam by Governor-General of India, Lord Francis Edward Rawdon-Hastings. Hastings was interested in evaluating the growing power of Siam, establishing a reliable reconnaissance of Siamese lands, establishing trade relations, and understanding Siamese policy with regard to both the Malay States to the south (particularly Penang, to which the British had laid claim) and to French attempts to establish a colonial presence in Vietnam. While the mission failed to establish trade relations, evaluate Siamese political positions regarding Penang, or explore the interior, he did collect cartographic materials detailing the coast, much of which John Walker compiled into this map.

In the appendix to Crawfurd's Journal of an Embassy from the Governor-General of India to the Courts of Siam and Cochin-China, he lists the sources of this remarkable map. Many are new surveys conducted en route, earlier British surveys of the Malay States and Bengal, and French sources for Indochina, but the bulk of the map as it relates to Siam is based upon cartography passed clandestinely to Crawfurd by a 'Mohammedan Mariner' and native of Siam. To quote Crawfurd,

From the Cape of Patani to the point of Kwiis taken from a Mohammedan mariner, a native of Siam, possessed of considerable intelligence-who was acquainted with the use of maps and the quarterstaff, and could even take an altitude of the sun with our quadrants...

he goes on to describe how this same mariner, in fear of his life, divulged less and less information the closer the came to Siam,