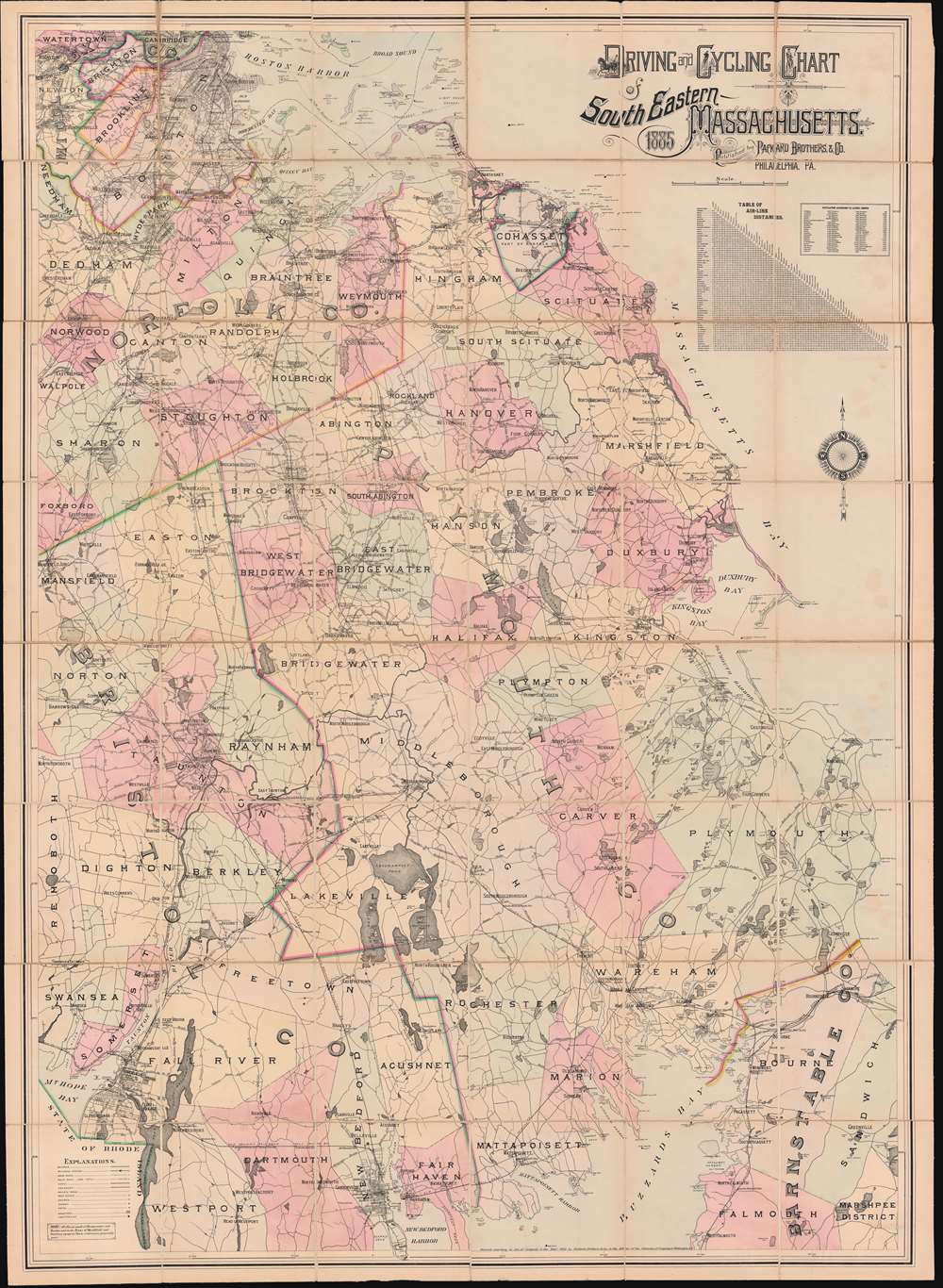 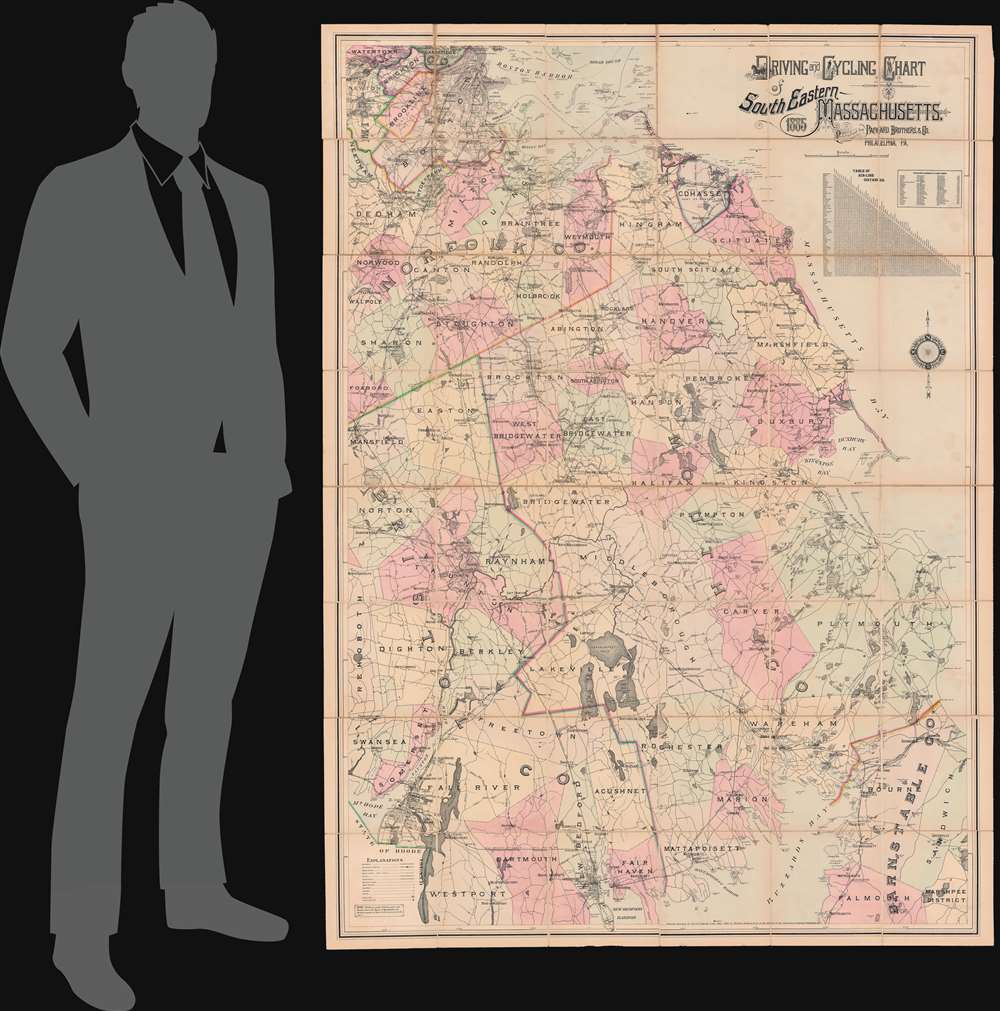 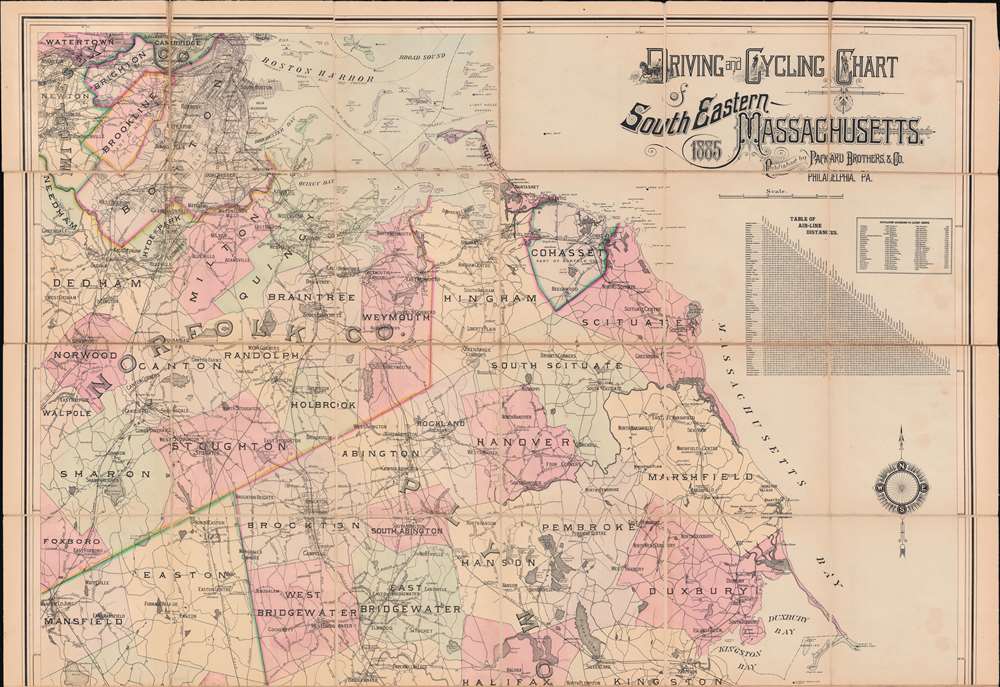 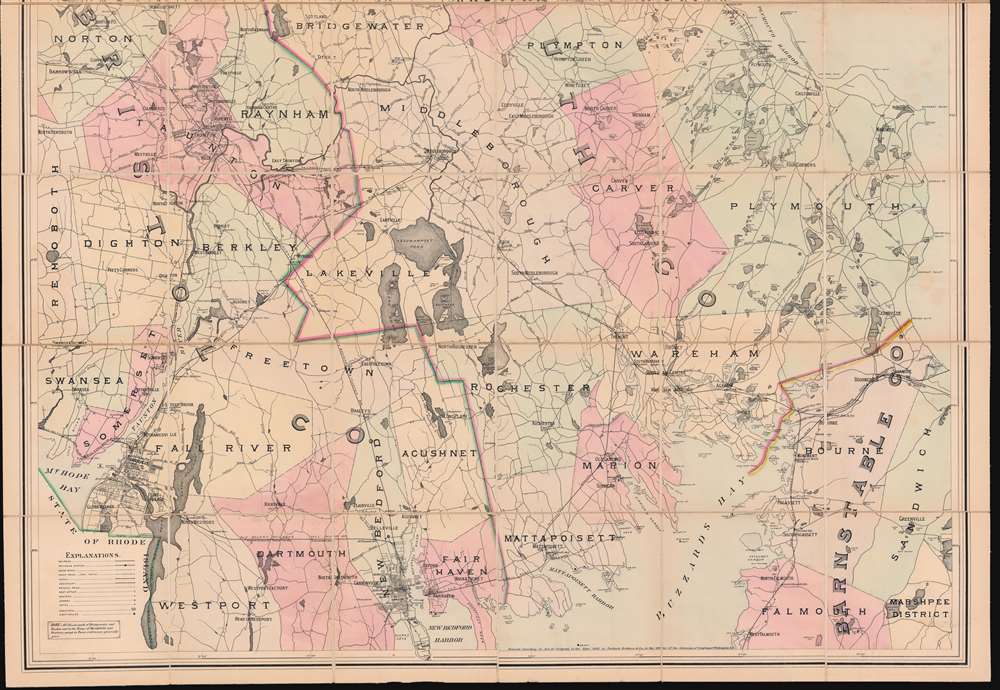 A meticulous large scale folding wall map of southeastern Massachusetts issued by Herbert and Horace Packard in 1885. The map is an expression of the pre-automobile 'bicycle fever' that gripped New England, particularly the Boston area, in the late 19th century. It further underscores the importance of quality roads to cyclists. In the latter 19th and early 20th centuries, cyclists proved major lobbyists for the 'good roads everywhere' movement, setting the stage for the emergence of the American highway system in the mid-20th century.

The map is drawn specifically for cycling and driving (by which they mean horse cart), and thematic images of penny-farthing bicycles and horse carts are integrated into the titling and compass rose. Composed on a large scale for easy reading, coverage extends from Boston to Falmouth and west as far as Fall River. Effort is made to delineate roads of all types, noting whether they are 'good' or 'poor'.

While there can be little doubt the Packard brothers hoped to capitalize on the cycling craze, it should not be forgotten that they were from Plymouth - located centrally on this map. The map may well have been as much to serve their own cycling passion as it was a commercial venture.

The Boston area, particularly the north and south shores, was at the epicenter of American 'bicycle fever' in the early 20th century. Boston held the first American bicycle race on May 24, 1878. In 1883, Abbot Bassett of Chelsea set out on the first recorded 100-mile bike ride, meandering on an adult tricycle along the North Shore to Ipswich and back. One year after this map was made, in 1886, the Albert Pope firm 'Columbia Safety' introduced a $100 'safety bicycle' capable of completing a round trip from Newton to Ipswich on the Newburyport Turnpike in about 10 hours. By the 1890s, Boston had its own bicycle, The Wheelman, with wide circulation throughout eastern Massachusetts. 'Bicycle Fever' continued in Boston until the 1920s, when interest in cycling was superseded by a national obsession with the autocar.

This map was published by Packard Brothers of Philadelphia in 1885. We note examples at the New York Public Library, the Boston Athenaeum, the University of Michigan, Yale University, the State Library of Massachusetts, and the University of California Santa Barbara. There is no record of the map on the market.

Herbert Samuel Packard (September 2, 1850 - October 29, 1912) was a Philadelphia lithographer active in the second half of the 19th and early 20th centuries. He was born in Plymouth, Massachusetts. In 1870, he apprenticed to a local (but unknown) engraver in Bridgewater, Massachusetts. From 1875 to 1880, he worked with the Boston firm 'Haskell and Allen'. In 1879, he relocated to Philadelphia to partner with William H. Butler, establishing the lithographic firm 'Packard and Butler'. In 1883, David Anson Partridge joined the firm, at which point it was renamed 'Packard, Butler and Partridge'. The Philadelphia Fire of 1886 destroyed the firm, but Packard and Partridge continued to publish together until 1893. From at least 1885, Packard also occasionally published with his brother Horace Edgar Packard (January 12, 1862 - ????) under the imprint, 'Packard Brothers'. Herbert had another brother, Sumner Ellsworth Packard (March 9, 1860 - April 1, 1899), but we do not believe he is the 'brother' in 'Packard Brothers'. Rather, it is likely Horace E. Packard, who from about 1892, is listed in city directories as a lithographer. That firm was renamed 'Packard, Packard, and Powell Novelties' in 1906, when 'Powell' joined the business. Herbert Packard died on October 29, 1912. Learn More...