1861 Lloyd's Map of the Southern States or Confederacy 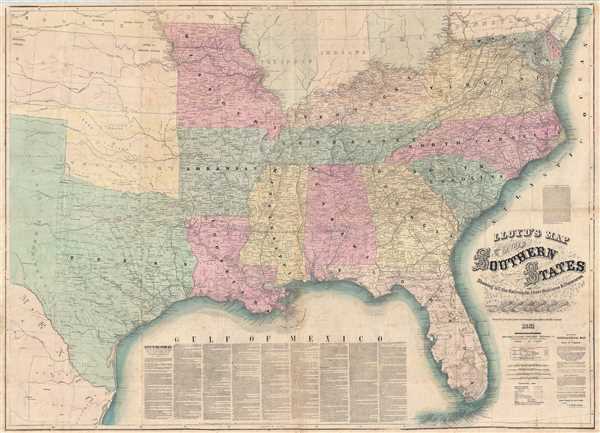 1861 Lloyd's Map of the Southern States or Confederacy

Enormous and rare map of the Confederate States at the outbreak of the American Civil War.

A very attractive example of J. T. Lloyd's extremely scarce railroad map of the Southern or Confederate States. Printed on a monumental scale, this map was issued in 1861 at the outset of the American Civil War and illustrates those states below the Mason-Dixon line that were aligned to the Confederate cause. Coverage ranges from Maryland and Delaware to the southern tip of Florida and from the Atlantic Seaboard west to include all of Texas. The map is highly detailed throughout with towns, railroad lines, roads, cities, topography, and counties noted.

Lloyd issued this map in wall map, pocket map, and newspaper editions. This is the scarce newspaper edition and most likely, given the low quality of the paper, the rarest. This is enormous map was, remarkably, printed as a single vast broadside (most maps of this size would have been printed with smaller plates then joined). The recto is full of Lloyds' idiosyncratic text featuring advertisements, disparagement of the similarly named competitor H. H. Lloyd, textual descriptions of the lands depicted, and testimonials from military generals and other men of renown. Among the advertisements, most inflated with bombastic language, is, printed on both the map and newspaper side, a promotional for 'Lloyd's $100,000 Topographical Map of the State of Virginia (the only real good map ever made in America).'

This map is quite rare and appears to be the only edition of the map in 'newspaper' format despite the fact that Lloyd advertises on the verso that a new edition would be 'issued every Saturday morning at 8 o'clock.' Later versions of the map in other formats, such as wall map and case map, were issued in 1862 and 1863. Lloyd's maps are all rare and this map in particular is seldom on the market with the last recorded sale in 1987.

J. T. Lloyd (fl. c. 1852 - 1865) was a New York City based map publisher active in the middle of the 19th century. J. T. Lloyd should not be confused with the competing New York map publisher, H. H. Lloyd, with whom he was often in conflict. Lloyd's maps, despite being printed in New York, frequently focused on the southern states, then in the midst of the American Civil War. Lloyd's maps are noteworthy for their stupendous size and extensive detail as much as for their bombastic advertisements and self-promotion, with which he decorates both the rectos and versos. Surprisingly, given his propensity for self-aggrandizement, very little is known of Lloyd or his life. Learn More...