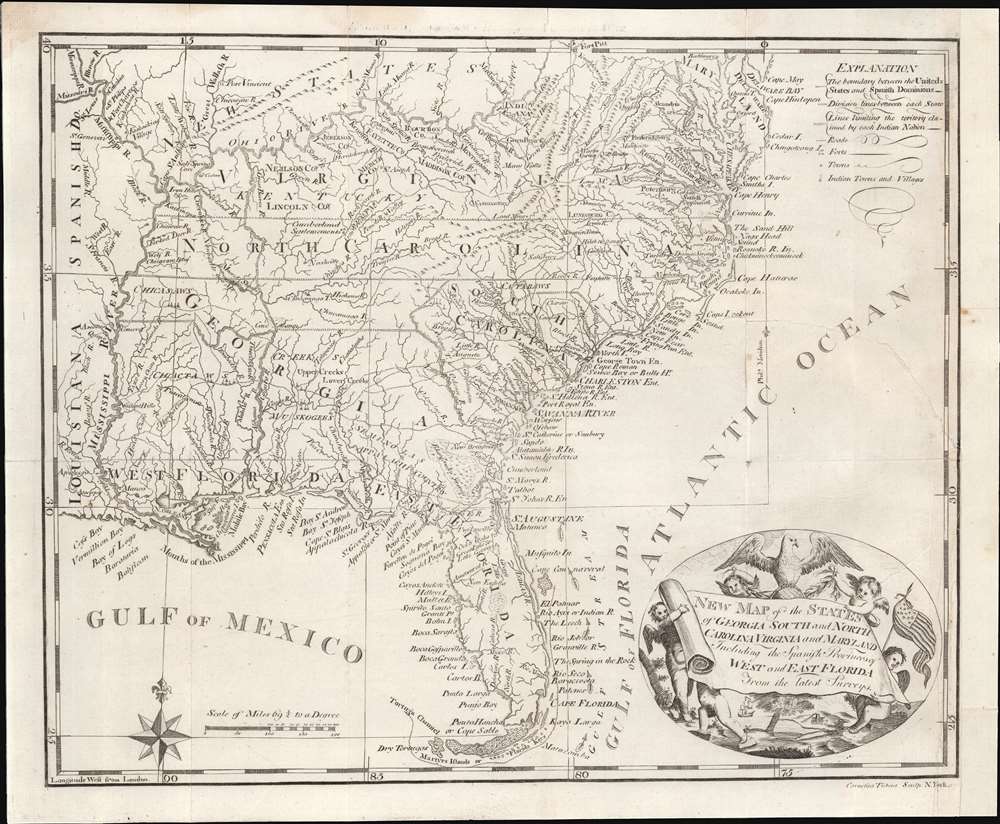 An intriguing and extremely scarce 1793 map of the southeastern portions of the United States, including Florida, by Cornelius Tiebout. Predating the Louisiana Purchase, the map covers the full United States as it then existed, as well as Spanish Florida. Coverage extends from the Chesapeake Bay to the Florida Keys and from the Mississippi River to the Atlantic seaboard. An arresting title cartouche in the lower right features an American Flag and is surmounted by a bald eagle.

For an American imprint this map is extremely early. It predates the formation of Alabama, Mississippi, Kentucky, Tennessee, and West Virginia, and as such, North Carolina, and Georgia extend from the Atlantic to the Mississippi - following their original royal charters. Numerous Spanish and American forts are noted in the Mississippi and Wabash valleys. Identifies the Cumberland Settlements, among earliest group of settlements in modern day Tennessee. The Moravian Settlement, in North Carolina, is also noted.

The map features a wealth of American Indian information relating to the Cherokee, Chickasaw, Choctaw, Creek, Muscogee, and Seminole, particularly in the western parts of Georgia. This one of the few maps to name the Upper Creek settlement of New Eufaula, in central Florida, established in 1767 by Creek refugees from Eufaula, a major Creek settlement located in what is today Alabama.

This map was drawn and engraved in New York by Cornelius Tiebout for issue in William Gordon's 1793 History of the Rise on the United States as well as Gilbert Imlay's 1793 A Topographical Description. There are two states, the first issued in 1789, with a date in the lower right, and the second in 1793, as here, without the date. Otherwise, there is no substantive difference between editions. Some may note a similarity to the 1788 Joseph Purcell map, A Map of the States of Virginia North Carolina…, but it is considerably updated. Scarce.

Cornelius Tiebout (1773 - 1830) was an American engraver of portraits and maps, and is possibly the first American born engraver. He is credited with engraving most of the maps for Christopher Colles' 1789-1790 A Survey of the Roads of the United States of America and for introducing English stippled portraiture to America. Tiebout was born to Tunis Tiebout and Elizbeth Lamb in New York City. He was initially apprenticed as a silversmith and began engraving on copper to make extra money. As early as 1789 he was working with Christopher Colles on various projects including A Survey of the Roads of the United States of America. In 1790, Tiebout had a falling out with Coles, abounded the incomplete road book project, and took work engraving for New York Magazine and Brown' Family Bible. Early in 1795, Tiebout traveled to London where he studied English stipple engraving under James Heath. Returning to New York the following year, 1796, he completed a stipple engraving of John Jay, the first strong example of that style by an American, establishing his reputation as a portraitist. Tiebout remained as an engraver in New York until 1799, after which he relocated to Philadelphia where he achieved some success selling portrait prints, becoming in the process wealthy. Unfortunately for Tiebout, in 1825 most of his riches were lost in a failed business venture of uncertain aspect. Shortly after his financial collapse, Tiebout relocated to Kentucky, where he died around 1830 - 1832. Tiebout maintained offices in New York at 24 Holden Hill and 273 Pearl Street. Learn More...

Good. Right margin extended. Some wear on old fold lines, especially at fold intersections. Like most examples, it exhibits two repaired closed tears extending from right margin approximately 3 and 4 inches to the page, respectively. These are symptom of the way map was originally folded and bound into the history., thus are common to most examples.